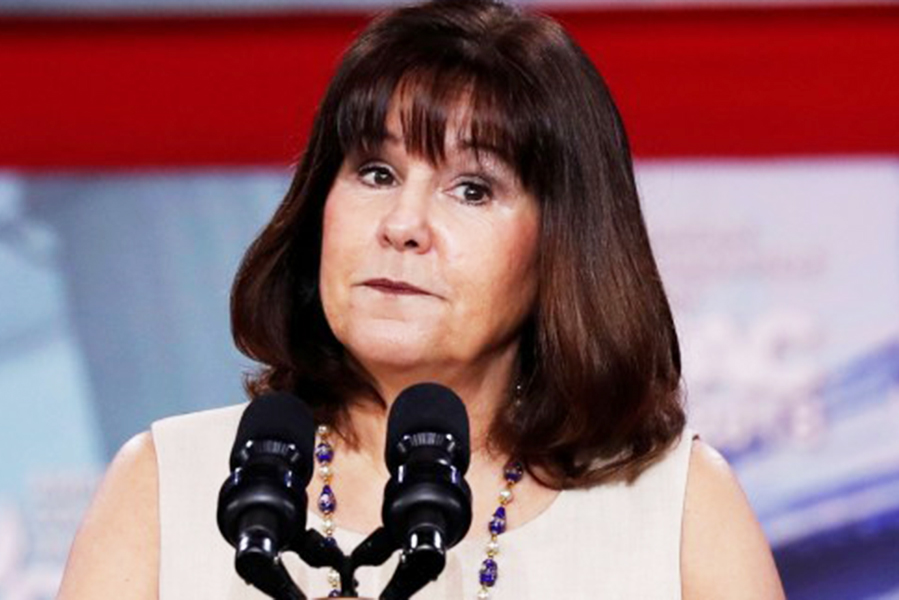 Imagine walking into art class one day in grade school and finding that none other than Karen Pence, wife of Vice President Mike Pence, is your teacher.

For a lot of kids, such a thing would be pretty exciting, regardless of how said kids’ parents voted in 2016. I mean, hey, how many kids can claim that they have a B-level celebrity as a teacher? Also, her watercolor paintings are actually really good.

What isn’t good is the school at which Pence is teaching. Because that school, the K-8 Immanuel Christian School in Virginia, bans LGBTQ people. No gay teachers. No queer students. No lesbian lunch ladies. They don’t even want LGBTQ allies working for, attending or sending their kids to the school.

And people are a little, well, grossed out that the vice president’s wife would take a job at such an unwelcoming school. It’s worth pointing out that Pence worked at this same school for a dozen or so years back when her husband was a congressman. So why is it a big deal that she’s going back?

Because her spotlight is brighter now. Her platform is elevated. When she was a congressman’s wife teaching there was, while still gross, pretty low-key. But no more. Now she’s doubling down on a school that very explicitly discriminates against LGBTQ people. And from the very highest reaches of government, that’s being condoned and encouraged, and it’s wrong.

This is just piling on to the harm this administration has done to LGBTQ people, whether it’s rescinding guidelines that aimed to protect LGBTQ students or banning transgender troops.

Not surprisingly, Pence has received criticism from the Human Rights Campaign, the ACLU and GLAAD.

“Why not teach at a school that welcomes everyone, instead of choosing one that won’t serve LGBTQ kids, kids of LGBTQ parents?” JoDee Winterhof, senior vice president for policy and political affairs at the HRC told HuffPost. “The Pences never seem to miss an opportunity to show their public service only extends to some.”

“This sends a terrible message to students,” the ACLU tweeted, while GLAAD encouraged people to sign a petition telling Pence and Immanuel Christian School “to stop discriminating against LGBTQ students.”

But the Pences also pissed off Lady Gaga.

“To Mike Pence, who thinks it’s acceptable that his wife work at a school that bans LGBTQ, you are wrong,” Gaga said during a recent performance. “You are the worst representation of what it means to be a Christian. I am a Christian woman and what I do know about Christianity is that we bear no prejudice and everybody is welcome.”

That is, of course, not the Pence brand of Christianity where being a Christian and discriminating against LGBTQ people go hand in hand and cannot be separated.

There is some confusion about what this means when it comes to freedom of religion and freedom of speech. Does Karen Pence have those rights? Yep. Can the school legally ban LGBTQ people? Yep. Does reporting on this story and/or criticizing Pence constitute an “attack?” Nope.

It’s not an attack to call someone out for being awful and hateful. And it’s still not an attack when you call someone out for being awful and hateful when they’re doing it in the name of religion. The funny thing about freedom of religion and speech is that they work both ways. In other words, not everyone believes the same shit you do, or hates the same people you do, and when you’re a public figure, you’re going to be called out no matter what you do.

So why not teach at a school that welcomes everyone? Unless, of course, Pence doesn’t welcome everyone. And, yeah, she has every right to believe that LGBTQ people aren’t deserving of equality, but that’s a view held by a smaller and smaller group of increasingly hateful and reactionary people. Cling to that view if you choose, but don’t be surprised to get shit for it.

Mike Pence rejects the idea of even questioning a school’s wholesale rejection of LGBTQ people.

There’s that pesky freedom of speech thing again. Criticism must absolutely continue. It’s the bare minimum we can do in the face of injustice.