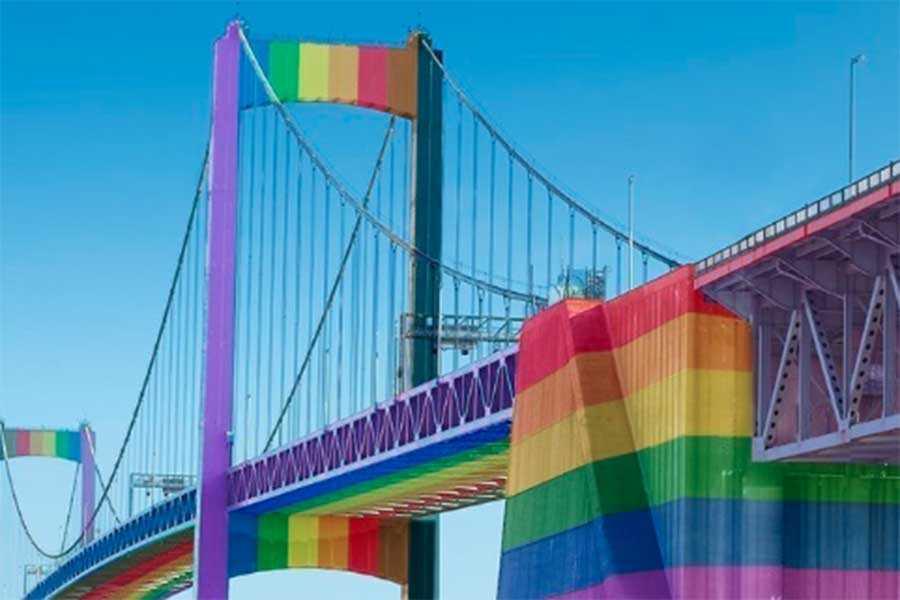 The Walt Whitman Bridge may be getting a rainbow-flag makeover in celebration of the poet and essayist’s 200th birthday, which will be May 31.

The University of Pennsylvania Libraries’ Kislak Center is organizing a year-long celebration of Whitman’s life and revered literary works. The events kicked off with an online petition to paint the Walt Whitman Bridge the colors of Philadelphia’s rainbow flag. The humanist was known to write about queer relationships and attraction in is poetry. Whitman wrote about romantic and sexual relationships between men in works like the “Calamus” poems in his “Leaves of Grass” collection.

The single-level, seven-lane suspension bridge that stretches across the Delaware River from Philadelphia to Gloucester City, N.J. opened in 1957. The bridge is owned and operated by the Delaware River Port Authority. Last year, the regional transportation agency completed a two-year-long project of cleaning, painting and repairing the bridge. The maintenance cost nearly $57 million.

As of press time, the Change.org petition in support of the project received more than 500 signatures. It is unclear how the project will be paid for should it move forward.

The bridge is named after Whitman in recognition of his importance to the region. Whitman spent the last two decades of his life in Camden and frequently traveled by ferry to Philadelphia.

The Penn Libraries, with support from the Pew Center for Arts and Heritage, is aiming to reintroduce Whitman’s influence as a prolific “poet of democracy” during the 19th century.

The yearlong celebration will focus on the two-week period from May 24 to June 9. The “Whitman at 200” cultural-event series will include a Whitman-inspired exhibition at the Arcadia University Art Gallery Jan.24, a Birthday Cake Bake-Off at the Parkway Central Branch of the Free Library of Philadelphia in February, the “Whitman at 200: Looking Back, Looking Forward” symposium at the Penn Libraries in March and a Whitman look-alike contest at the Philadelphia Brewing Company in April. All events will lead up to Whitman’s 200th birthday celebration May 31.