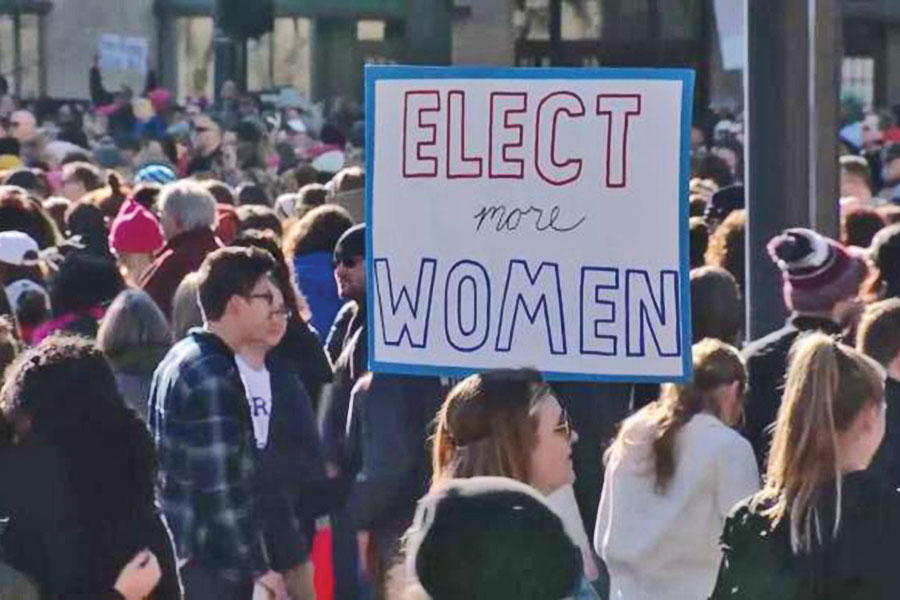 They call it The Hillary Effect.

For two years since Hillary Clinton won the popular vote by 3 million and lost the election by 77 electoral votes, she has been telling women to run for office — and they have, in record numbers, in the hundreds, spurred in part by her loss as well as Donald Trump’s ascension to the presidency.

In Pennsylvania, there has not been a woman representative in Congress since 2015, when Allyson Schwartz left her seat in the 13th District to run for governor. Prior to Schwartz, there had only been seven women in the U.S. Congress from Pennsylvania — ever. Now, there are eight on the ballot.

What’s more, each of the Democratic women candidates has a strong pro-LGBTQ stance.

On Nov. 6, seven Democratic women and one Republican woman are vying to join the House, with at least one woman taking a seat come January, because in the Fifth District, Mary Gay Scanlon (D) is running against Pearl Kim (R).

In her primary victory speech, Scanlon said, “A-year-and-a-half ago, my daughter and I donned pantsuits to go to the polls and vote for what we hoped would be the first woman president — a celebration we believed was long overdue. And, like most of you, we were shocked by the election to our country’s highest office of a man who had no record or seeming inclination for public service.”

For Houlahan, running for Congress is also profoundly personal.

Houlahan told PGN how her daughter Molly, “who identifies as the Q in LGBTQ,” had come home from her theater job in New York to be with the family for the election results. There were balloons and champagne.

And then the results came in.

Houlahan watched her daughter’s devastation. Her fear of returning to New York, of being queer in a country that would not have the support of Clinton’s pro-LGBTQ platform, but would be led by Trump and all his hateful rhetoric.

For Houlahan, it was hard to watch her daughter, who “didn’t want to leave the comfort and safety of our house to go back” now that she feared “how her nation saw her and her LGBTQ community.”

It wasn’t just Molly. It was also Houlahan’s Holocaust-survivor father. Suddenly neither felt safe to walk the streets in their own country, she recalled. An elderly man who had fled Hitler as a boy and a 24-year-old who suddenly felt she should somehow have been more out, told more people, urged them to vote for Hillary, because she and others like her would be under threat from a Trump presidency.

“Molly was emphatic that she wanted to share this,” to be out to her mother’s potential constituents. “She felt it would have affected votes to have done so before the 2016 election,” said Houlahan.

The Human Rights Campaign has endorsed Houlahan. Her stances on everything from healthcare, which she believes must be affordable and accessible, to reproductive rights, to her unwavering support for the Equality Act, make her an ally to marginalized groups and those most targeted by the Trump administration.

Eye on the Equality Act

Another staunch supporter of the Equality Act is Scott Wallace, the Democratic candidate running to unseat incumbent Brian Fitzpatrick in the newly redrawn First Congressional District. Fitzpatrick had been serving in the Eighth District.

Wallace told PGN of his concerns about recent efforts by the Trump administration to roll back legal protections for LGBTQ people, and was particularly worried by the newly leaked draft memo from the Department of Health and Human Services regarding gender identity.

“It is scary, and a harbinger of erasing transgender identity all together,” Wallace said, adding the attack is an attempt to impose the idea “of a traditional way of viewing gender.” He said it’s one more “stalking horse” from the Trump administration that would open the door to “more and more attacks on LGBTQ people.”

Passing the Equality Act would be a strong step toward protections for LGBTQ people, Wallace said.

“I support it 100 percent. The government has no business determining who you love any more than they do where you worship. As with this new proposed trans ban, we have to stop stoking discrimination against LGBTQ people. At the earliest ages, we’re witnessing an increase in bigotry. This administration and the hatemongering is leaking down into the communities. Congress must stand up to this: Grow a spine.”

Wallace himself has been under attack from super-PAC ads, which have claimed he’s a radical who funded Abu Mumia Jamal’s legal defense. The ads are framed as dog-whistle racism. On Oct. 22, it was determined the ads would no longer be shown in the Philadelphia TV market pending legal review.

Wallace said, “This is not dog-whistle, this is bullhorn, this is Willie Horton on steroids. Fitzpatrick wallows in this stuff. It’s racist fear-mongering and the stoking of intolerance.”

Wallace said racial, gender and anti-LGBTQ biases are the foundational rhetoric of Republicans for the midterms. “They have nothing else.”

Sen. Bob Casey (D-PA) agreed. In an interview with PGN, Casey talked about his debate with Republican Lou Barletta and the points on which the two diverge. (Barletta did not respond to requests for comment.)

Of major importance to the community are Medicaid, preexisting conditions, the Equality Act and LGBTQ rights.

Casey said Barletta didn’t understand — or care — about the basics of healthcare. Medicaid isn’t a ‘you’re-out-of-work program.’ It’s a healthcare program or long-term care [for seniors and the disabled]. The contrast [between Barletta and me] was clear on healthcare. I’ve been steadfast to the point of being angry on preserving protections for preexisting conditions. [Barletta] is in a place where he talks about maintaining that protection but he hasn’t done a blasted thing or lifted a finger to do it.”

Casey added that “the contrast could be clear as well on LGBT issues. He’s not supported the Equality Act or my bullying bill. He certainly doesn’t support my Disarm Hate Act because of the extreme view he takes on guns. The only measure he wants to pass to deal with mass shootings or gun violence is metal detectors in schools, which is fine, but that’s not getting to the problem. There’s no common ground between us, so it’s a pretty clear choice.”

For the LGBTQ community, the choice seems clear among the majority of other candidates as well. Jess King’s website has LGBTQ rights in huge bold type and the candidate’s words: “America is a nation founded on an ideal — that all of us are created equal. No matter who we are or who we love, we have a right to pursue our dreams, marry our chosen partner and live our lives free from discrimination.”

She supports the Equality Act, which she said “would provide consistent and explicit nondiscrimination protections for LGBTQ people across key areas of life, including employment, housing, credit, education, public spaces and services, federally funded programs and jury service.”

HRC is also supporting Scanlon, who as an attorney has done pro-bono work on marriage equality and other LGBTQ issues, and Wild, who supports the Equality Act.

Casey said the fight against Republican obstruction to fairness and equity in all arenas from healthcare to women’s rights to immigration and LGBTQ rights would remain an uphill battle.

“In order to make progress on bullying, the Equality Act, on healthcare, the big issues or even the micro issues and bills, you’ve got to figure out a way to work on their side. A lot of my work on some days won’t be new or passing new initiatives. It would be stopping a Republican majority or the administration from undermining healthcare protections, sabotaging healthcare and engaging in this far-right, angry confrontational approach to a lot of these issues instead of bringing people together. We’re going to keep pushing against that the best way we can.”