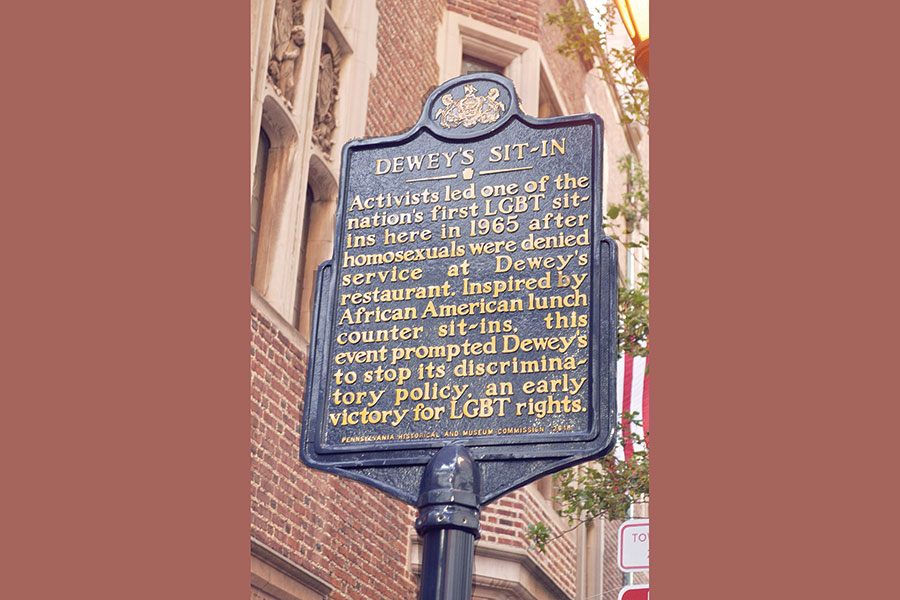 Officials at the Pennsylvania Historical and Museum Commission said they’ll meet with LGBT advocates regarding a state historical marker recently installed near Rittenhouse Square that omits recognition of the early transgender community.

The marker, dedicated on Oct. 1, commemorates a 1965 LGBT sit-in at Dewey’s, a restaurant that was located at 219 S. 17th St. The restaurant has since been demolished and a Hyatt Hotel stands at the site. The marker, which is owned by PHMC, is sponsored and funded by Equality Forum, a Philadelphia-based LGBT advocacy group.

The text of the marker states: “Activists led one of the nation’s first LGBT sit-ins here in 1965 after homosexuals were denied service at Dewey’s restaurant. Inspired by African-American lunch-counter sit-ins, this event prompted Dewey’s to stop its discriminatory policy, an early victory for LGBT rights.”

Deja Alvarez, a local trans advocate, contends the marker is misleading because gender-variant individuals — not “homosexuals” — were the target of Dewey’s exclusionary policy and led the subsequent protests.

“Too often, gender-variant people, particularly trans people, are erased from LGBT history,” Alvarez said. “Then we have to fight to get them put back in. I’m fed up with it. I’m exhausted from watching our erasure from not only history, but from the community as a whole.”

Howard Pollman, a PHMC spokesperson, said the agency is willing to meet with LGBT advocates about the marker’s language.

“We take the comments regarding the Dewey’s sit-in marker text seriously,” Pollman said in an Oct. 5 email. “As is our normal process, we worked with the sponsor to create the text and we have been in contact with Todd Snovel, executive director of the Pennsylvania Commission on LGBTQ Affairs, for guidance. We look forward to engaging with the Philadelphia LGBTQ community to arrive at an agreeable outcome for this and future LGBTQ-related markers in Philadelphia and across the state.”

In a statement, Snovel said the commission “looks forward to working closely with the PHMC moving forward on all markers honoring LGBTQ communities in Pennsylvania.”

Alvarez said she’d like to meet with PHMC officials regarding the marker’s language.

“I’m open to having a dialogue about the appropriate language that should be used in the marker. The trans community must be involved in that dialogue.”

Malcolm Lazin, executive director of Equality Forum, wrote in an email: “While Equality Forum paid for the marker, installation and dedication, the wording on the marker is solely in the judgment of the Pennsylvania Historical and Museum Commission.”

Pollman said that Lazin “participated in the drafting of [the] text,” adding that “our normal procedure when placing a marker anywhere in Pennsylvania is to work with the local sponsor to develop the language. That routine process was used in this case.”

“PHMC contends that the marker is accurate, although we acknowledge some may consider it incomplete. Marker text is akin to a tweet: Key points are made, but context and nuance are often lost.”

PHMC is willing to discuss the possibility of a revised marker, Pollman said.

“In a 40-word marker, it is impossible to provide the entire context about a specific event. Marker-nomination documents cite several sources that researchers can use to understand the broader context of marker subjects. We would also need to consider the wishes of the nominator/sponsor, plus there is the matter of cost.”

Matt Mecoli, a local LGBT advocate, nominated the Dewey’s site for a historic marker in November 2017, but sent a letter to PHMC relinquishing control of the nomination to Equality Forum in April 2018. Mecoli’s nomination form contained language for the marker that explicitly recognized the transgender community.

“I wrote and submitted the original state historical-marker application,” Mecoli told PGN. “But as of May, I had relinquished full control and Equality Forum was the sole sponsor of the nomination, including control over the marker’s text in conjunction with PHMC.”

Mecoli said he started work on the marker in August 2017 and subsequently tried to collaborate with Equality Forum. The collaboration didn’t work out and in April he permitted Equality Forum to be the substitute nominator/sponsor. Mecoli said he didn’t write or suggest the final language of the marker. He also expressed support for “a new marker that more accurately and inclusively represents the true history of the spot, as detailed in my original nomination.”

“It’s wonderful that we now have eight LGBT historical markers in Philadelphia, more than any other American city,” Skiba told PGN. “It’s also important they they be accurate and honor all the people who should be honored.”

Skiba said the Dewey’s event was significant because the Janus Society, a “homophile” organization based in Philadelphia at the time, supported the gender-variant and trans communities.

“The new Dewey’s marker manages to tell a lot of the story of the sit-ins. However, there’s a glaring omission. It’s important to note that not only ‘homosexuals’ were denied service. The Dewey’s sit-in was, in fact, another instance of trans people being in the front lines of the battle for equality. Let’s celebrate that.”

“As I understand it, there’s a process for revising markers. If we get input from a range of people who should have been consulted in the first place, then we can ensure this marker — and those in the future — accurately reflect our history.”