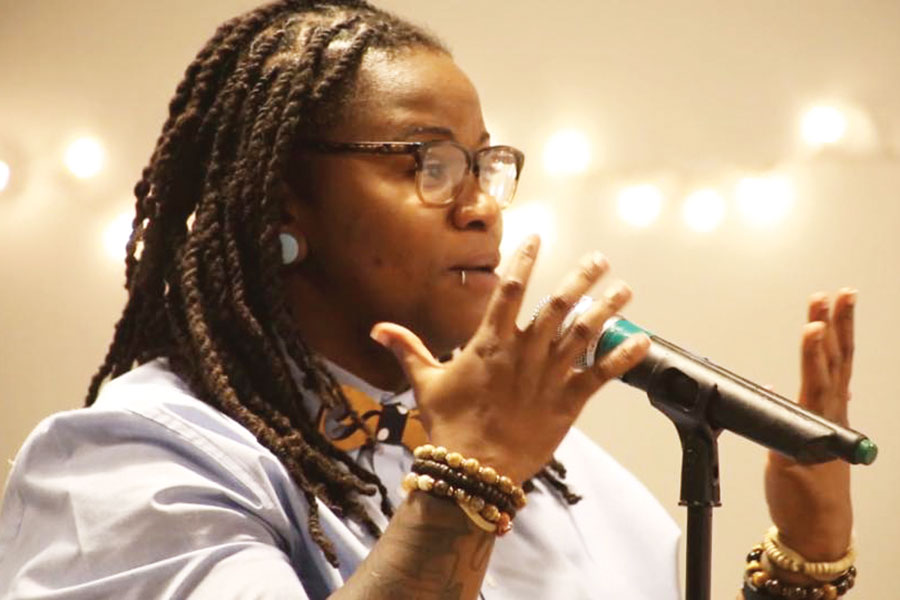 An urban farm in Philadelphia hosted its first open mic as participants performed spoken-word poetry and music to highlight visibility and representation for LGBTQ artists of color in entertainment.

The OUTSpoken LGBTQ open-mic showcase featured 10 local artists at the Life Do Grow Farm Oct. 6. Poet Ashley Davis was the featured artist of the evening. An intimate crowd filled the dome-shaped event space.

OUTSpoken creator Rienne Scott started the open mic in 2012 as an LGBT-affirming space for spoken-word artists in Philadelphia. Scott took the event to Baltimore, where she lived for four years, and grew the showcase into a monthly event. When she moved back to Philadelphia in June, she wanted to revive the open mic for LGBTQ artists of color in the city, she said.

“I came back to Philly and was shocked that there weren’t any performance spaces for LGBTQ people of color. Many queer performers don’t have access to spaces where they can freely be themselves without feeling like an ‘other’ or feeling out of place. I wanted OUTSpoken to be that space where they could be free,” Scott said.

Jeaninne Kayembe was one of the performers, and also serves as the co-CEO and co-founder of the Life Do Grow Farm. The queer “thought leader” and multimedia artist shared her poetry and music. She said the open mic connected her with other LGBTQ artists of color and also introduced more of the community to the farm.

“There are very few events in the city that provide a stage specifically for LGBTQ artists, and I knew that I wanted something like that on the farm. We host all types of events that are centered around folks who don’t have access to event space. We provide a space for people who live in the neighborhood to express their creativity,” she said.

In 2010, Kayembe and a group of friends, known as the Philadelphia Urban Creators, transformed a vacant two-acre square plot located between 11th and 12th streets in North Philadelphia into a fully sustainable community farm. The farm hosts weekly farmers markets that feature seasonal produce such as kale, squash, peppers, okra and collard greens. The farm is also home to a recording studio for aspiring artists from the neighborhood.

Kayembe performed with Mary Baxter — who goes by the stage name Isis Tha Saviour. Baxter shared her story of giving birth to her son while in prison before debuting her new rap song to the crowd that filled the farm’s Freedome — a 30-foot geodesic, or hemispherical, dome that the Philadelphia Museum of Art donated to the Urban Creators last year.

Baxter said the open mic “provided a platform to tell my story with a room full of people that understand what it’s like growing up in North Philly.”

“We have something like this right in our own back yard for artists like me who don’t want to have to explain my experiences with people who might not understand or will judge,” she said.

Scott plans to make the open mic a recurring event, with the next one taking place early next year.