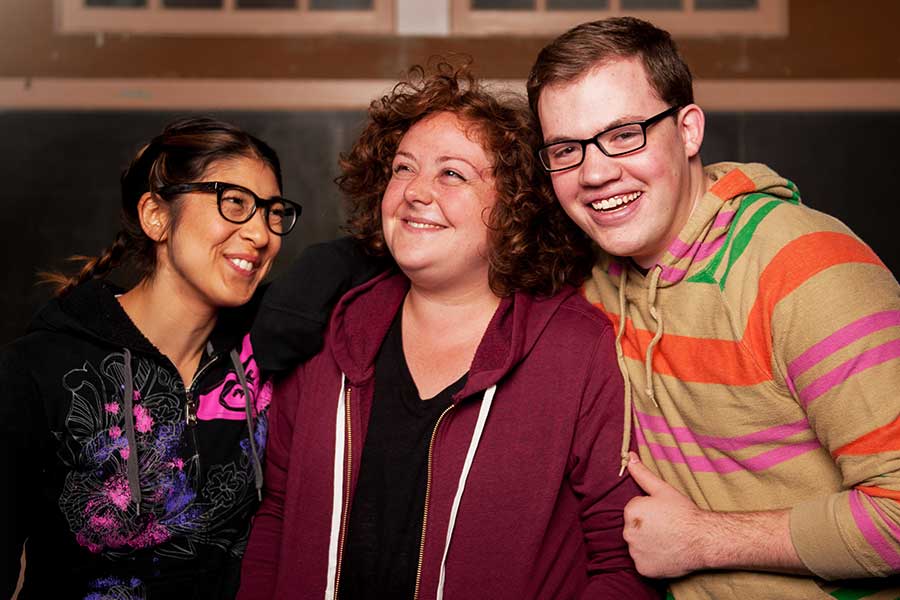 There’s a lot of misfit action rampant at Plays & Players in October. The theater’s long-running tenant, 1812 Productions, just happens to be this city’s sole company purely dedicated to all things comic. British playwright Tom Wells writes about his gray industrial hometown of Hull, England with misfit-driven plays about escapism such as “Folk,” “Jumpers for Goalposts” and now “Broken Biscuits,” which has its American premiere at 1812 in October.

In a show about three wooly teenage nonconformists loudly seeking to find and make their voices heard through rock ’n’ roll, out-and-proud Philly actor Michael Macri might just be the loudest.

Fresh out of Temple University’s theater program, Macri is already into the frying pan of his professional stage debut through one of this city’s most daring companies.

“I’m excited to go to work on the actual show,” he said during rehearsals at Plays and Players Theatre. “I can’t wait until this character hits the stage. As my first professional show, it’s pretty awesome to get to play an out character who is pretty confident, especially for a 16-year-old. I say that because, well, that wasn’t me.”

At the same rehearsal, Wells recalled being 16, which wasn’t so long ago (he’s 22). “No, I wasn’t nearly as together or confident as my character in ‘Broken Biscuits.’”

Upon its debut in London, The Guardian wrote, “Though a play about age and missed opportunities, ‘Broken Biscuits’ is a sweet meditation on the fierce, fragile alliances formed on the cusp of adulthood.”

Along with forming a rock band with a plan to make it out of Hull and into adulthood, the characters test and prod each other into songwriting. One tune is a glammy song about a compulsion to put on a shocking pink headpiece and a sparkly sheath dress.

Megan, Holly and Ben are definitely not the cool kids in Hull but, at the very least, they’re going to get out of that town in a glam-rock blaze of comic  glory.

Macri said that his experience, his gay story, started in West Chester with an all-boy Catholic-school education.

“I knew for a while, probably before high school, that I was gay, but I didn’t really think about it until eighth grade,” he said.

When he did come out, during his senior year in high school, Macri only mentioned it to his family and closest classmates.

“It wasn’t until I got to college where I guess I stopped hiding it. I don’t know that I ever hid it per se, I just wasn’t about to tell everyone — not that everyone cared.”

It was when he got to Temple and became part of the university and his major (theater) that Macri felt more comfortable about his sexual orientation.

“College was my first real experience being around people and meeting new friends while being out,” he said. “I probably shared that fact more often than I should have; I was so super-nervous. No one really cared, and they accepted me immediately for who I was.”

Macri’s “Broken Biscuits” character, Ben — who penned the aforementioned ode to pink fascinators — gets outed early on in the show, and embraces it with showy display and hardcore pride.

“You only wish that you could be as confident as he is if you came out as gay so young; the way he carries it in his body, connected to his self and settled in it all. He almost gets younger during ‘Broken Biscuits,’ as the world becomes more accepting of who he is.”

For all the comforts and positivity of the gay self as portrayed in “Broken Biscuits,” don’t expect a laugh-a-minute theater excursion with a glorious, victorious finale.

“It’s no frilly comedy where everything works out fine in the end,” said Macri, without divulging much more.

“There are deeply meaningful moments here that will pull at your heartstrings. Yet — like with everything 1812 does — they see past the text on the page and find every funny nuance they can.”