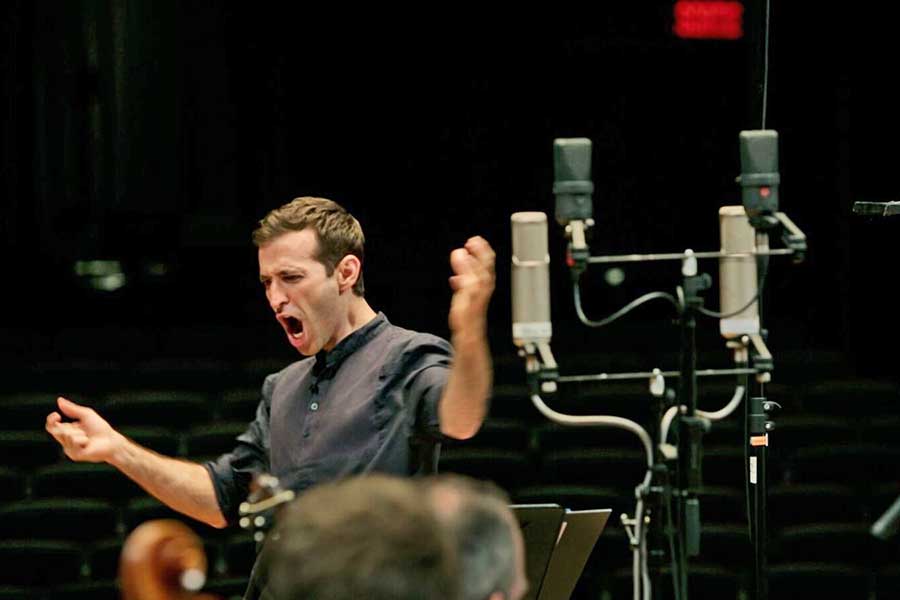 Young but legendary countertenor and LGBTQ icon Anthony Roth Costanzo has graced Opera Philadelphia in the recent past, first in “Phaedra” as Artemis, then in “Written on Skin” and its modern tale of lust, violence, purity and deceit in the dual role of First Angel and Boy.

For O18, however, Costanzo steps up his game (and influence) with the world premiere of “Glass Handel,” an innovative, self-devised multimedia piece featuring two orchestras mashing up the minimalist music of Baroque master George Frederic Handel and repetition-heavy composer Philip Glass, with help from avant-garde fashion/art company Visionaire, Calvin Klein designer Raf Simons, choreographer Justin Peck, ballet dancers David Hallberg and Patricia Delgado, performance artist Ryan McNamara and filmmakers including James Ivory and Mark Romanek. That this occurs with Costanzo presenting his solo album debut, “ARC,” as he and other musicians still with the audience moving around them at Annenberg Court in the Barnes Foundation, makes this O18 adventure singular and sensational.

PGN: Has your journey as an out gay man in opera always been an easy one? A rocky road?

ARC: With pretty shrewd and proactive psychologist parents, it’s been an easy road. I was never self-conscious about it, and I feel I’m lucky that no one ever made an issue of it with me. If I’ve encountered any tricky situations, I’ve always found ways to diffuse the tension in order to alleviate any awkwardness.

PGN: You’re having quite a run in Philly. What made you want to associate yourself with Opera Philadelphia in the first place?

ARC: I got to Opera Philadelphia when David Devan was becoming its manager, and already it was a company pioneering new work and interesting traditional productions. David pushed them farther, and now I see the company as something rare, one willing to take risks with operas that are artist-driven, focused on new audiences and engaging to both sides of that equation.

PGN: Other than devising “Glass Handel,” what is it that you want to do in the broader sense?

ARC: I’m focused on finding and fostering interesting collaborations that draw in new viewers, and also innovate the form in a way that, well, doesn’t offend traditional audiences, but rather gets people excited and moved. Fundamentally, as an artist, I’m interested in emotion, and I think that opera is rare in that it powerfully gets to the heart of that.

PGN: As a countertenor with an already-challenging voice, I would imagine, though, that you are always looking for something different — to create risk.

ARC: You’re absolutely right. The thing about being a countertenor is that it is an unconventional voice that doesn’t fit or have a role in operas such as “Tosca.” To have a career, then, what I’ve had to do is to forge my own path. By the constraint of my voice, I have found new freedom. My voice type might not always be required. All that and, oddly enough, I will perform in a traditional opera house, the Met, next fall, with “Akhnaten” — Philip Glass’ wonderful work, an opera I did on a smaller scale previously.

PGN: Are you going to shave your head again?

PGN: That might not be a big deal for you, but it will be for the Met. Did you find that daunting?

ARC: Absolutely. Wouldn’t anyone? There is, however, a ritualized aspect to it that makes it not-so-sensational. More solemn and less titillating. Once you figure how to perform that, and hold yourself in that manner, it changes that role’s perception — not so much for me, but for the audience.

PGN: So Philip Glass is a constant in your life with that opera and this new work. Why?

ARC: Handel defined me, Glass changed me. I hear myself in him. The repetition can be off-putting, but once you give yourself over to it, it is like peeling away layers of human psychology. Our minds obsess, mull, repeat. It’s cleaner, more contemporary operatic trope, and requires you as a performer to come up with interpersonal, solitary ways of looking at phrasing and harmonic structure.

PGN: I know there are things you can’t or won’t tell me about the piece. How did you come up with the notion of you and your musicians in the center?

ARC: I was biking around London listening to much of the music we were doing for “Glass Handel” on my headphones, and I loved the feeling of motion around the music. I thought that it would be great to have all this moving around me at once, along with creating additional media such as dancing, live painting and wild classical music videos. And I wanted the audience to participate in that movement.