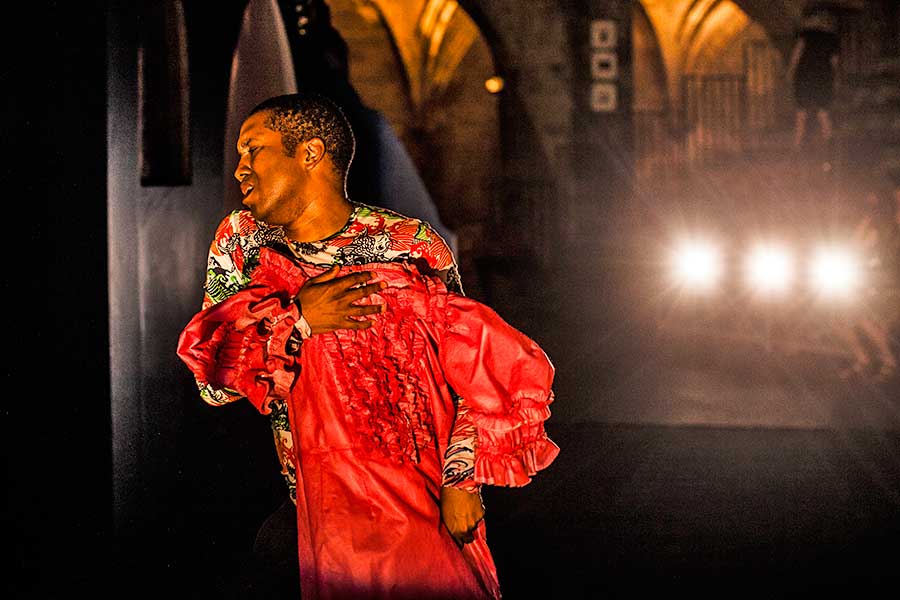 In choreographer Trajal Harrell, modern dance has its most poignant historian, funniest class clown and most sensual essayer of cultures and expressions outside his own era.

Along with creating the post-vogue classic series “Twenty Looks or Paris is Burning at the Judson Church” for the 2014 Fringe Festival, Harrell — who spends most of his time in France — is also famous for the messed-up version of the hoochie-coochie, as presented in his new Fringe work, “Caen Amour.”

With a cast of (mostly) male dancers performing as women, “Caen Amour” looks at how the Japanese butoh-inspired dance became an art form — at least to Harrell.

PGN: I’m talking with you mere days after Paul Taylor passed, so condolences to anyone in the dance, movement and choreographic world.

TH: Mr. Taylor … [Mimes drawing a picture of a heart]

PGN: Before heading to the cosmopolitan experimental dance scene of Manhattan, you came from rural Georgia — Douglas. How much of that past is in your work on a regular basis? How have elements of your Georgian past become recognizable signatures in your newest work? Or do you eschew that?

TH: A lot of my research is now on butoh dance, and butoh in its founding was looking back to rural Japanese theater. And for sure, my understanding of the hoochie-coochie shows begins in my hometown, but I’m sure you will ask me about that later.

PGN: As a 21st-century artist, what’s most important to you about containing, explaining, delving into and exploding dances of the past — those of “Twenty Looks or Paris is Burning at the Judson Church” “The Ghost of Montpellier Meets the Samurai” and now the hoochie-coochie?

TH: I find history infinitely interesting, especially once I realized how it too was a construction and full of holes and gaps and fictions. Learning in grade school, I, like many, thought it was actually the truth of what happened in the past. Once I realized it was much more about shaping the past and the future, I somewhat felt it gave all of us more agency as producers of history in collectively including and reviving multiple voices and perspectives.

PGN: How does what you do as a choreographer — “Caen Amour” in particular — present who you are within the LGBTQ world? How would you define this new work as a brand of activism, and what is your role in that activism?

TH: Much of my work is about disrupting those binary opposites that have been used to classify humans and create the option for new possibilities which cannot easily be described in the languages we have inherited but, in fact, have to be invented with the sheer force of our collective imaginations.

PGN: Your emphasis is very often making dance that is entertaining rather than simply be studied and stoic. Fringe Fest CEO Nick Stuccio and I discussed you at length in this regard. What inspired you to entertain rather than just educate and elucidate?

TH: I think the idea that entertainment and art don’t belong together came out of one branch of modernist thought. Shakespeare was certainly dealing with entertainment as an aesthetic operation, for just one example. So I’m not really bound by the limits of modernism. I use entertainment and rarity and beauty and many other things when I feel it’s appropriate for a work.

PGN: “Caen Amour” begs the question: How is a woman performed by mostly male dancers?

TH: I think the show is influenced by how early modern dance was performing women in its relationship to Orientalism, and I explore this through the form of an imagined hoochie-coochie show. And I think these shows historically are related to the history of early modern dance (here a hole or gap or crack in history). I wouldn’t dare try to answer how a woman is performed, but it’s an important question to consistently be asking, taking into consideration the inequality in the world.

PGN: Why touch upon a dance form that was born of the rigid religious values of the Middle East but is now made contemporary and modern?

TH: The hoochie-coochie was a construction of Western exoticization. It was an “Oriental” fantasy.

TH: Butoh can be quite erotic. Butoh, though, is not one way of dancing or another, but rather a mental way of thinking about dancing. Though, to answer your question more fully: In my research, I was looking at how butoh started. One of the things butoh artists were revolting against were the conventions of Kabuki. The early Kabuki began with rural theater forms. They reminded me of my own relationship to rural theater and my first encounter with dance as a performance. When I was growing up in Georgia, my father would take me to the fair. At a certain point in the night, he would send me off with friends and he would go to something called the hoochie-coochie show. It was only when I got older that I began to realize what it meant. I started researching the hoochie coochie and looking at its potential relationship to butoh in terms of formal practices, both from an imaginary and a realistic point of view. Butoh was highly influenced by modern dance and I think that this hoochie coochie is related to the beginnings of modern dance as well. Again, I always tend to find the cracks and fissures of history: things that are clearly a part of (dance) history but that haven’t been fully exposed or investigated.

PGN: What is your take on Philadelphia?

TH: We previously did “Antigone Sr.” in the Fringe, which is the largest part in my “Twenty Looks or Paris is Burning at the Judson Church” series.  I like Philadelphia a lot. It’s one of those cities like St. Louis where I really find the diversity of the audience for contemporary work so inspiring. I would love for the work to come here more. I hope one day to have a retrospective in Philadelphia because I would love the Philadelphia audience to encounter the breadth of the work from that long-timeline perspective.