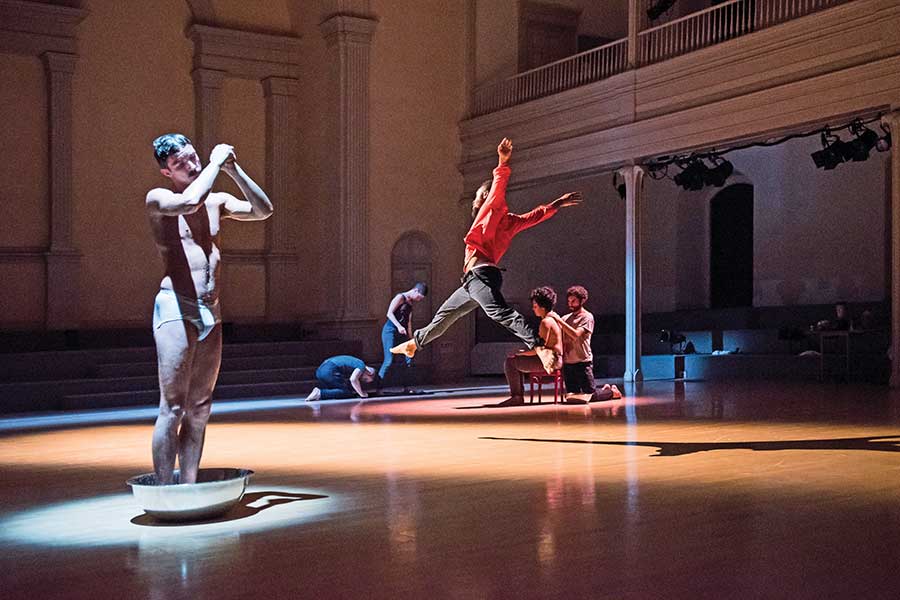 Friend and collaborator Ishmael Houston-Jones, a one-time Philadelphian, joined forces with fellow choreographer Miguel Gutierrez for the mashup of Bernd’s work that is serving as Fringe Fest’s premiere piece, “Variations on Themes from Lost and Found: Scenes from a Life and Other Works by John Bernd.”

To further celebrate Bernd’s dynamic and the art of that era, an exhibition presented in collaboration with Philadelphia poet and curator David Acosta, cofounder of Casa de Duende, will accompany the dance in the lobby of Christ Church Neighborhood House. The event will chart the AIDS crisis in Philadelphia by providing city-specific context to Bernd’s experience.

“As Casa de Duende does not have a physical gallery space, we place exhibitions and programming at diverse locations with the ability to conceive and create original programming and/or to collaborate and cooperate with various artists and community spaces,” said Acosta. “That stems from, and is a byproduct of, my own background as an LGBTQ activist for many years and with my own longstanding involvement with LGBTQ art and artists in Philadelphia.”

In 2011, Acosta curated “Witness: Artists Reflect on 30 Years of the AIDS Pandemic,” which featured diverse multidisciplinary artists’ take on the health crisis.

“The exhibition allowed me to explore more deeply an issue I had been grappling with for over two decades, and that was the nagging question about the impact that the AIDS epidemic had on the arts, and how art had fared as a result of that interruption,” he said. “It seems to me that right before the onset of the AIDS epidemic, there lived a group of artists, all of them on the edge of something — and because there were so many of them at the same time, at the beginning of the AIDS epidemic, and the epidemic took them all, I am haunted by the question of whether American art would be different had they lived.”

Acosta’s curation for the Bernd-Houston-Jones piece is part of a continuous narrative, he added; an internal conversation (some of which appears in his unpublished manuscript, “Songs to Survive the Body,” penned before the onset of protease inhibitors) filled with ghosts and unfinished things, and which FringeArts anchored to Philly.

“While ‘Scenes From’ is about dance pieces created at a very specific time and place in the history of the AIDS epidemic, it is important for us not to think of it as just past history, because AIDS, while not the death sentence it was at the time John Bernd was working on these pieces, remains a very-real epidemic today — one still impacting young gay men of color and others at alarming rates,” Acosta noted. “I think ‘Scenes From’ will help to inform our past, to revisit it, and will also serve to remind us that AIDS is not over.”

For Houston-Jones, his pre-Bernd Philadelphia journey included being raised Catholic in Harrisburg. In 1971, at age 21, he moved to Philadelphia to study with Helmut Gottschild, Eva Gholson and others, and took classes at the Arthur Hall Afro-American Dance Ensemble and with Joan Kerr. He also participated in Friday-night workshops at Group Motion and taught improvisation in his Old City loft.

“What’s interesting now is that ‘Variations on Themes from Lost and Found’ will be performed at Christ Church Neighborhood House, which is literally a few doors from my loft at 217 Church St. in the 1970s,” said Houston-Jones. “I was also a waiter at the restaurant Lautrec, which was located on Head House Square, and I can still recite the omelet choices offered at Sunday brunch (sausage, bacon, cheese, chicken, chicken liver, fine herbs and mushroom).”

He moved to Manhattan in 1980 and met Bernd, and recognized the kinship of using improvisation, autobiographical details and male bodies unaffectedly partnering together for performances, “which we sometimes forget was a radical idea even in the ’80s,” he said.

“While the new piece was sparked by John Bernd’s work in the 1980s and the loss of a generation of role models, mentors and muses in dance during the first 15 years of the AIDS crisis, I find that the piece incites in me a hope for the future,” Houston-Jones reflected. “There is the joy of Miguel finding a lost artistic ancestor he didn’t know he had. There is the eureka feeling in the young performers when they become stewards of this work and the work of so many others that would have otherwise been lost. There is the exuberance of the sheer love of dancing.

“I also feel it is important that that part of my history be reclaimed and to imagine what the essence of that history might have become,” he added. “Some artists that I admired and who were extremely important to my artistic development — Arnie Zane, Arthur Armijo, Charles Ludlum, David Wojnarowicz, Ethyl Eichelberger, Harry Whittaker Sheppard, Jim Tyler, John Sex, Michael Bennett, Michael Schwartz, Reza Abdoh, Ron Vawter, Tracey Rhoades, Ulysses Dove and Woody McGriff — each of these men died between 1987 and 1996. Each was under 50 years old when he died. That is an immense loss. And for me, this piece was an act of reclaiming that loss, but also allowing that work to be a springboard for work that can be made by others in the future.”

“Variations on Themes from Lost and Found: Scenes from a Life and Other Works by John Bernd,” by Ishmael Houston-Jones and Miguel Gutierrez, with a curated art program from David Acosta, runs Sept. 14-16 with showings at 2 and 8 p.m. at   Christ Church Neighborhood House, 20 N. American St. Tickets are $15-$35. A post-show conversation will be held after the Sept. 16 afternoon performance with the three artists and John Anderies. For more information, visit https://fringearts.com.