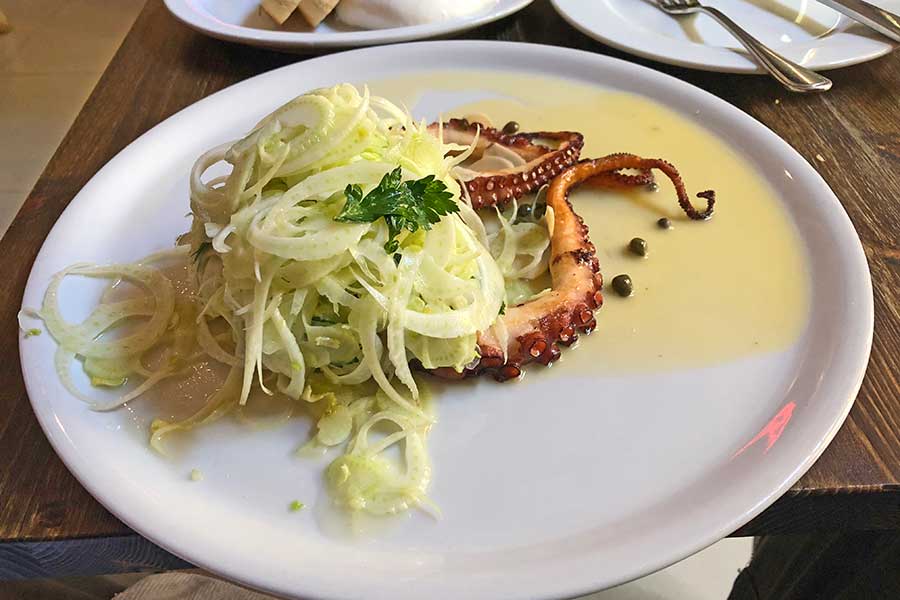 They might be on opposite sides of the block but, as Porta (1216 Chestnut St.) and Brickwall Tavern (1213 Sansom St.) share a liquor license and you can enter one through the other, we’re reviewing these conjoined restaurants together.

First up is Porta, an Italian restaurant that occupies a large space with high ceilings that used to be a furniture store. It quickly gained a reputation for turning out impressive pizza. But we’ll get to that in a minute.

Things started off fresh and lively with the generously portioned housemade mozzarella ($12), which was super soft, mild and served with crostini. It paired nicely with the New Jersey heirloom tomatoes ($12), which were equally simple, robust and dressed with basil and olive oil.

Things got pleasantly more complex with the pan-roasted day-boat octopus ($18), which is playfully plated to look like the octopus is trying to hide under a massive bush of fennel, along with potatoes and capers drizzled with olive oil and lemon. The herbaceous greens on the plate worked well with the tender roasted tentacles, giving the dish a lovely Mediterranean feel.

The pasta menu has some surprises as well. The blossom russo is an elegantly presented dish in which the zucchini visually stood out. The zucchini purée that formed the foundations of the plate also added welcome flavor and color to the silky pasta presentation.

So does Porta’s pizza  deserve the gush of accolades it has acquired so far? That’s a yes. This pie hits all the right spots, but doesn’t go overboard with the toppings. The Festivus pizza ($17) had just enough house-made sausage and mozzarella, along with red onion and red pepper, to allow the flavorful sauce and perfect crust to shine. 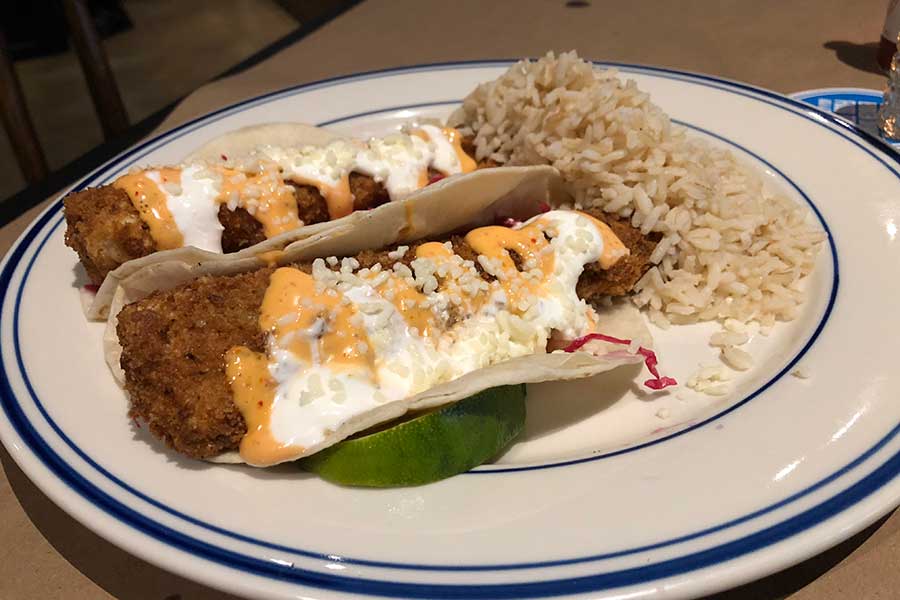 Meanwhile, on the other side of the block, Brickwall Tavern aims to appease the comfort bar-food cravings of the youthful clientele. This is another large space, but Brickwall has bars and flat screens peppered throughout the restaurant, giving it a distinct sports-bar feel.

This menu is full of cravable items that sometimes suffer from a lack of focus, mainly where side dishes are concerned.

On the other hand, the small plates have a lot of personality. The pierogies ($9) were a buttery, oniony hit. The crabby deviled eggs ($10) benefited more from the presence of Old Bay seasoning than from the crabmeat decorating the tops of them, but they were still tasty and solid.

What the side dishes lacked in composition, the entrées compensated.

We tried the “impossible burger” ($13), the vegan-burger substitute that is supposed to taste like the real thing. And does it ever. We couldn’t tell it from the real thing if we didn’t know. The housemade chips that came with it should have had more seasoning, even some more salt, to elevate them from plain.

The mahi tacos ($15) had the same problem. The tacos themselves contained perfectly fried fish and were topped with crispy red cabbage, spicy harissa mayo, lime and sour cream. Now we’re cooking, right? And what was parked next to these tasty tacos? What was served up to be the Andrew Ridgely to the George Michael of the plate?

Plain. Brown. Rice. Straight out of the pot, from the looks of it. Thank goodness there was a bottle of hot sauce on every table. But next time, just have the tacos go solo.

While we are loathe to play favorites, and we hope that both of these energetic eateries thrive in their new digs, don’t be surprised if Brickwall stares at us while we’re living it up with its conjoined twin. n