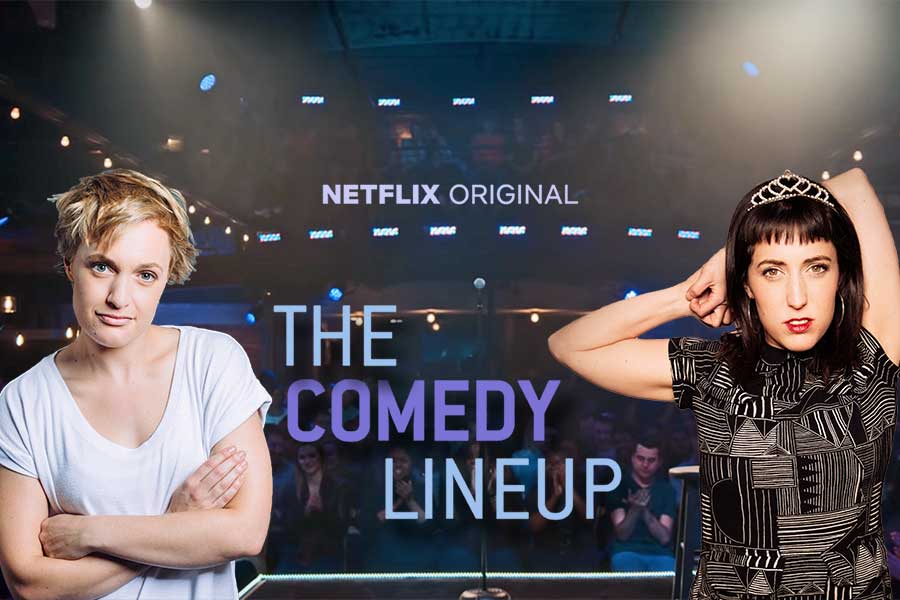 Netflix’s “The Comedy Lineup: Part Two” dishes out a second helping of 15-minute sets by an eclectic mix of up-and-coming comedians performing in front of an intimate live audience.

Two of the comedians featured in the Aug. 31 broadcast are Emma Willmann and Kate Willett, both of whom are out.

An actress as well as a comedian, Willmann is a Maine native who left her small-town life to cut her comedy teeth in Boston and New York. She’s toured with Louis CK and has appeared on TV shows like “Crazy Ex-Girlfriend” and “Crashing.” Willmann also co-hosts her own podcast, “Inside the Closet,” with fellow comedian and friend Matteo Lane.

Willmann said that out of all her creative comedy pursuits, her podcasting duties are nearest and dearest to her heart.

“I feel the most comfortable when I’m doing radio and podcasting because that’s just so fun,” she said. “When Matteo and I do our live shows, the amount of time you put into thinking about an hour-long standup set is like years. But he and I will not talk for a week before and then just catch up on the show.”

They say you can take the girl out of the country but you can’t take the country out of the girl. And Willmann would probably agree, because even though she’s become fully acquainted with the pace of city life and navigating the comedy scenes in two of the busiest and most competitive cities on the East Coast, she said that part of her mindset is “very rural.”

“I’m a friendly person,” she said. “Being from Maine, even if something isn’t my community, I’ll still approach it like that because everybody in the town knows each other. So if anybody has a bad attitude, then they’re the town asshole and everybody knows about it. And you don’t want to be that person, so I feel like I have to be friendly. Even though I’ve never been robbed, I still don’t always lock my door, which is stupid. Or I’ve lost my wallet a few times in New York and it’s always been returned. I’m going to knock on wood. Being absent-minded and friendly probably comes from being from a small town, but it for whatever reason it hasn’t fucked me over yet in New York. What I grew up with was the same small-town things all the time. So when I’m in the city, I look at everything with wide eyes, like What? There’s more than two restaurants and one blinking stop light? What’s going on here?”

Willmann said she appreciates the creative breathing room performers get during increasingly frequent opportunities to perform outside New York City and Boston.

“When I do a show in Maine, audiences will stay with the performer and the whole show so much more so than a New York or Boston audience,” she said. “There were comedians who would do a 10-minute set with maybe one joke at the end and people would laugh. If that was in New York, and a couple of minutes went by without somebody saying anything funny, the audience would be like, ‘Fuck this guy!’ or ‘Fuck this girl!’ They are more cutthroat in the city. There’s something nice about not having all that pressure and being able to explore stuff. It gives you a safer space to try something.”

Comedian, actress and writer Kate Willett weaves her feminist views and her experiences as a bisexual into her insightful brand of comedy featured both in the Netflix special and more in-depth on her 2017 live comedy album, “Glass Gutter.”

Like Willmann, she has traveled the world to perform, in her case at major international comedy festivals and opening for superstars like Margaret Cho.

“When I open for Margaret, she has a ton of fans who have been following her for many, many years and I’m still trying to build that,” Willett said.

She described the Netflix taping as a “big party” and said she was glad to see so much diversity among the performers.

“I was pleasantly surprised to see that this group of people had so many women and queer people.”

Willmann said she also enjoyed the experience and diversity featured in the taping, adding she doesn’t see that same level of diversity when she goes on the road.

“I almost don’t even see any gay comedians when I go other places. There are feminine ones popping up in L.A. but you don’t see a ton of gay comedians. I feel like I do in New York, but it’s a newer thing.”