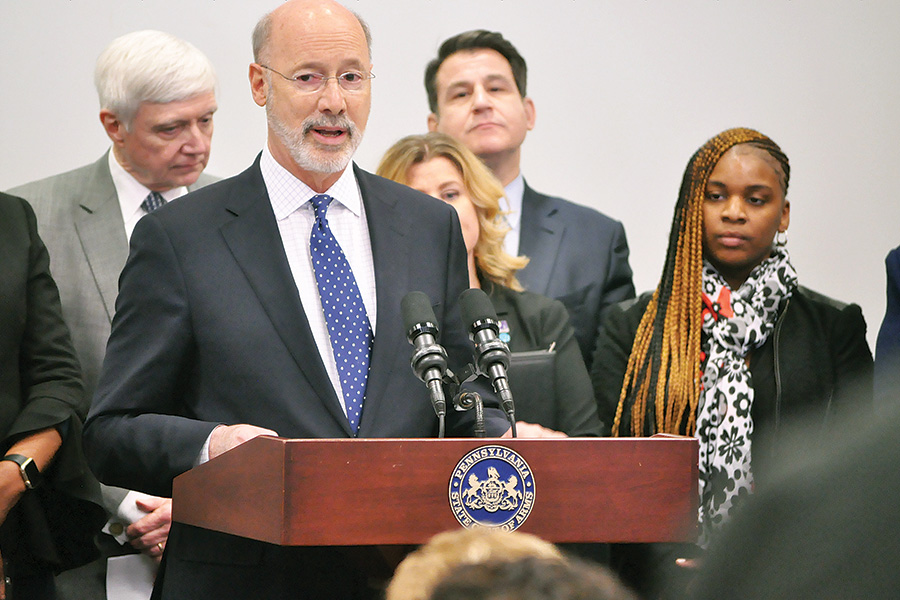 Gov. Tom Wolf signed an executive order Monday evening to form the Pennsylvania Commission on LGBTQ Affairs, the only one of its kind in the United States.

“The creation of the commission on LGBTQ Affairs is one step of many we have taken to ensure obstacles are removed for anyone who is facing an unfair disadvantage based on sexual orientation, gender identity and expression,” Wolf said in a press statement.
The commission will “help coordinate and drive statewide equality efforts,” he added.

“When I was a kid, I couldn’t have dreamed that I would be able to be myself and stand up for the intrinsic humanity and rights of people like me, from within the government,” said Sias, a trans man. “This commission is going to change lives.”

Wolf “understands that all Pennsylvanians deserve a voice in our government — no matter who you love, how you worship or how you identify. I welcome this opportunity and am grateful to the governor for his continued leadership and [being an] ally to the LGBT community,” said Kenyatta.

Bartlett echoed the other commissioners’ sentiments.

“I’m honored to serve alongside such a diverse group of Pennsylvanians from around the state who are committed to working with Gov. Wolf to address the pressing needs of our LGBTQ communities statewide — including trans equity, LGBT economic justice and civil rights for all,” he said. “We need this kind of statewide organizing now more than ever.”

The commission is necessary “to be able to speak on behalf of marginalized identities,” said Hikes. “I’ll be pulling from the work that we’re doing in Philadelphia and be able to receive some support on a state level with the initiatives that we’re doing within my office,” she added.

Jason Landau Goodman, executive director of the Pennsylvania Youth Congress, also was appointed to serve on the commission. He authored  the proposal for the commission after Wolf came into office in 2015. “I want to make sure that the issues of the most vulnerable Pennsylvanians are brought to the forefront,” he said.  “Making sure there are community leaders on the ground having a platform to be at the table at the highest levels of government is critical.”

While the commission is the only one of its kind nationwide, it is not Pennsylvania’s first. In 1976, Gov. Milton Shapp formed the Council for Sexual Minorities, which looked at ways to implement nondiscrimination legislation and laws to support LGBTQ students. Members also discussed same-sex marriage, which would not be legal in Pennsylvania until 2014.

The council formed out of a meeting Shapp had with PGN publisher Mark Segal and Harry Langhorne, the paper’s political reporter, in its early days. Shapp “was way ahead of his time,” Segal said.

Shapp also issued an executive order banning employment discrimination based on sexual orientation — the first enacted in Pennsylvania. And he issued a statewide gay Pride resolution.

The council operated until 1987, with LGBT people from across the state and representatives from eight major state agencies meeting regularly. Gov. Bob Casey Sr. neglected to reappoint members when he took office, despite telling PGN in 1986 while campaigning for governor that he would continue the Council for Sexual Minorities.

The Pennsylvania Commission on LGBTQ Affairs