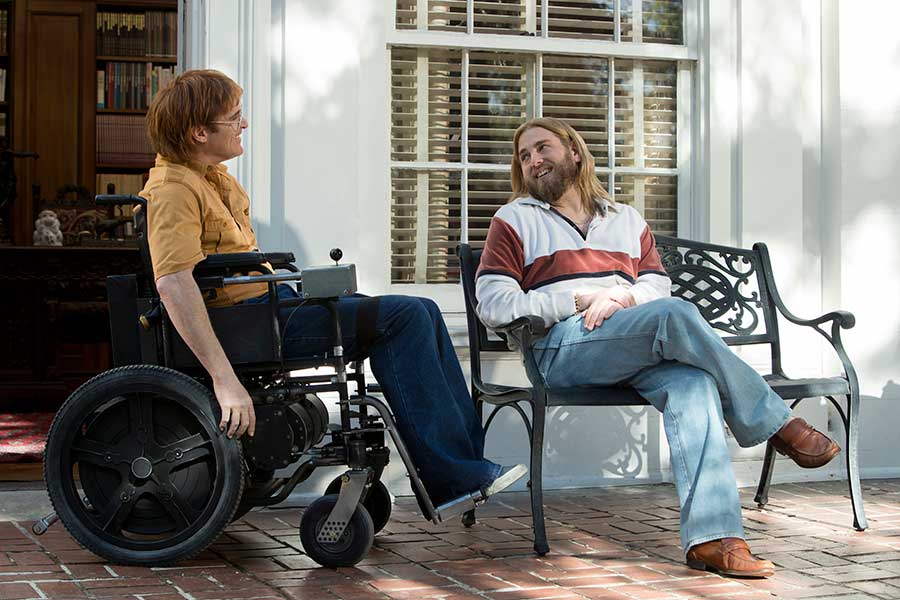 The film toggles back and forth in time to show how Callahan (Joaquin Phoenix) became both a quadriplegic and sober, finding strength in himself after feeling tremendous shame — most notably about being abandoned by his mother, who gave him up for adoption.

Van Sant doesn’t milk Callahan’s story for uplifting moments of inspiration, though there are some of those. Instead, he tells a story about self-love and self-worth that enlightens as it entertains. The film’s disability narrative takes a backseat to the messages about sobriety, acceptance and forgiveness.

But don’t worry; Viewers won’t get far into  the film without seeing the many moments of dark humor — most of them stemming from the subject’s cartoons, which appear throughout the film. One about lesbians is discussed at length (to make sure everyone gets it). Sometimes they are even animated. Most of them are hilarious.

At the start of the film, Callahan is introduced on stage as “Portland’s celebrity cartoonist,” and his speech to a sold-out crowd is juxtaposed with him providing the same narrative at an AA sponsors meeting run by Donnie (Jonah Hill), a gay man of independent means.

Callahan describes the last time he walked, and how powerless he was during the times he was inebriated. Wisely, Van Sant takes viewers through Callahan’s bender with his friend Dexter (Jack Black) right up to the accident (but without the horrific crash). A scene of Callahan in the hospital being treated for his injuries features intense, effective close-ups of him in traction on a stretcher being fitted with a head brace. These moments are later contrasted with wider shots of Callahan getting a motorized wheelchair and experiencing a measure of freedom.

Van Sant shrewdly uses a series of panels to show the progress Callahan makes in healing; it is an interesting parallel to his recovery in AA, which happens slowly. It is also in rehab where Callahan meets Annu (Rooney Mara), a woman he becomes intimate with when they reconnect years later.

Most of “Don’t Worry, He Won’t Get Far on Foot” depicts Callahan’s experiences in AA and going through the 12 steps of recovery. The group scenes are compelling, especially since the other members are interesting. They include Martingale (Ronnie Adrian), a gay African-American poet; Mike (Philly-raised Mark Webber), a man with rage; Reba (out performer Beth Ditto), a heavyset woman with a health issue; Hans (Udo Kier), a daunting German; and Corky (Kim Gordon of Sonic Youth), a divorcée.

The film’s title — which comes from one of Callahan’s cartoons — may be a blackly comic comment on the difficulties Callahan has going through the steps. He seems reluctant to give himself over to a higher power, despite urging from Donnie to do so. Likewise, he struggles to give up drinking until he has a profound experience involving his birth mother.

But he eventually learns how to live and, once he does, he blossoms. His cartoons are selected for publication in a series of outlets, and they generate a sufficient amount of hate mail from offended people, which John actually appreciates.

Van Sant places considerable emphasis on the messiness of the subject’s life, from his sloppy drinking and his catheter leaking to his frustrations with both his aide Tim (Tony Greenhand) and his disability-benefits coordinator Suzanne (Carrie Brownstein). This unsentimental approach pulls viewers into the story. Watching Callahan’s alcoholism get the best of him in the early scenes is sad, but seeing how he learns to love himself, and be loved by others, is gratifying.

The philosophical exchanges between him and Donnie are particularly enjoyable. Donnie seems to be able to get Callahan to open up and release his doubts and inner demons. In contrast, Donnie feels comfortable to confess something tragic in his life to Callahan.

Phoenix is fantastic as Callahan, and he captures both the tricky physicality of the role as well as the spirit of the artist he portrays. With his tangerine hair, big glasses and cockeyed smile, Phoenix embodies this man who lived hard before he realized how much hurt he was concealing. His emotional outbursts are riveting, but so too is a quiet moment when he has an epiphany at an AA session.

In support, Hill gives a moving performance as Donnie, a man who truly cares about the people he sponsors. However, while Mara is charming as Callahan’s love interest, the actress seems underused. And look fast for out actress Heather Matarazzo (best known for “Welcome to the Dollhouse”), who appears in one scene as a receptionist at an office Callahan visits to track down his birth mother.

“Don’t Worry, He Won’t Get Far on Foot” is a poignant drama about learning to find meaning in life, and Van Sant imbues the script with plenty of significance.