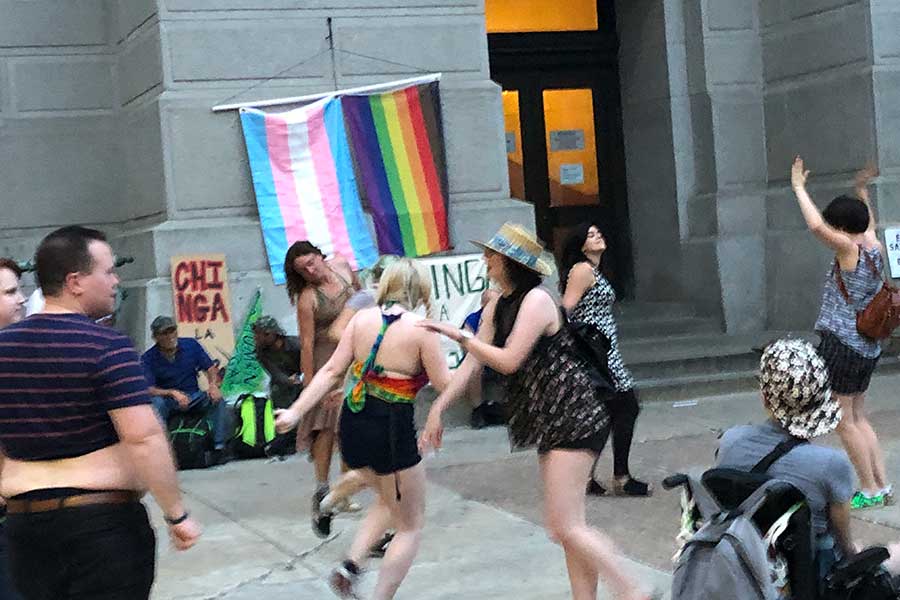 LGBTQ and immigrant communities are partnering to put pressure on Mayor Jim Kenney to cancel the renewal of the city’s Preliminary Arraignment Reporting System, or PARS.

PARS is a local, real-time database of police arrests that collects personal information such as Social Security numbers, dates of birth and countries of origin, which can then be used to target undocumented individuals for deportation.

Immigration and Customs Enforcement has had access to the city’s PARS database since 2010. ICE can access information about recent arrests and ask police to detain certain suspects whom the agency can subsequently take them into custody and potentially deport. By Aug. 31, three key stakeholders in PARS  —  the Philadelphia District Attorney’s Office, the City of Philadelphia and the First Judicial District  — will be required to either reauthorize or decline ICE access.

In a statement earlier this month, Philadelphia District Attorney Larry Krasner said he would “absolutely be a ‘no’ vote to provide additional access to PARS for ICE. The current arrangement shares information with ICE in a way that should not continue.” Mayor Kenney and representatives from the First Judicial District have not responded to requests for comment on whether they will vote against PARS.

Juntos, an immigrant-advocacy organization based in South Philadelphia, has been fighting to end ICE’s use of PARS for nearly as long as the authority has been doing it. Erika Almiron, executive director of Juntos, met with Kenney twice last week in an effort to end the information-sharing agreement.

“We’ve been in communication with the city for over a year about PARS and getting them all of the stories about what we’ve been seeing in the streets so that they can hear how ICE has been behaving,” she said. “It was an opportunity for Kenney to hear directly from the community about what’s been going on. It’s important for him to hear from the people who have been fighting this issue for years.”

Almiron said while Kenney hasn’t yet issued his answer, she believes the major is “taking it seriously,” adding that 84 local and national organizations have joined Juntos’ efforts to end PARS, including Galaei, Unite Here, the Philadelphia Teachers Union, the national Latinx and Chicanx advocacy organization Mijente and Black Lives Matter Philly.

Francisco Cortes, executive director of Galaei, said that immigrant and LGBTQ intersectionality makes it “critical” for LBTQ organizations to rally behind immigration issues.

“LGBTQ organizations should align with immigration-rights organizations because immigration is an LGBTQ issue,” Cortes said. “I know that there are LGBTQ immigrants in our city being negatively affected by PARS. LGBTQ people are trying to flee from homophobic countries because their lives are on the line. Even if you’re not an LGBTQ immigrant, LGBTQ-identified people know what it’s like for part of our identity to be used against us and to be criminalized for that identity.”

A report from the Williams Institute at UCLA in 2013 estimated that more than 267,000 undocumented people in America identify as LGBTQ. In January, Jose “Ivan” Nuñez, an undocumented gay man living in Philadelphia, was detained by ICE agents when he and his husband, Paul Frame, were petitioning for citizenship with the I-130 form, for an alien relative. The day of the routine interview at the offices of U.S. Citizenship and Immigration Services, ICE agents came into the room and took Nuñez away in handcuffs. He remains detained in York County Prison.

Representatives from Juntos and Galaei spoke in support of Nuñez and his husband at a press conference after he was initially detained.
Almiron told PGN that families have been separated long before the Trump administration’s immigration policy that separated children from parents at the border.
“Family separation is happening there and it’s also happening here. Every time somebody gets picked up by ICE, a family is getting separated,” she said.

Protesters from the “Occupy ICE PHL” movement — a grassroots protest effort to abolish the agency — supported Juntos’ efforts to end PARS by hosting a queer dance party in front of City Hall on July 11. Deborah Rose, a member of the Occupy ICE encampment, organized the event, where participants displayed signs that read, “We need immigrants” and “End PARS now” and also featured images of Kenney. One protestor wore a shirt decorated in bold black letters that read: “Smash white supremacy now.” Demonstrators danced in an area adjacent to the Occupy ICE encampment east of City Hall.

Rose, who is also the executive director of Philly Music Hall — a community center for alternative sexuality, including nontraditional relationship types — said she wanted to use her “privileged” status as a queer white woman to support marginalized groups.