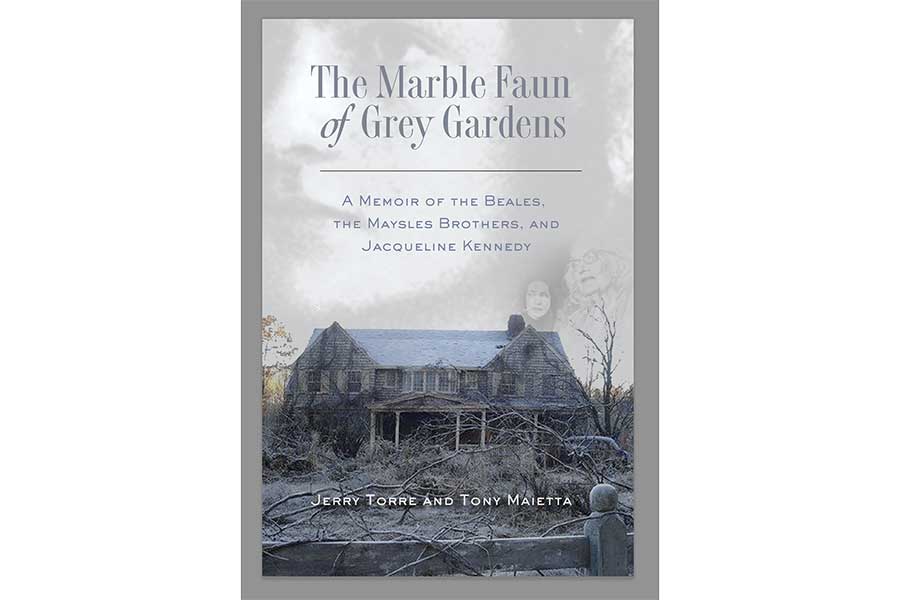 The Marble Faun of Grey Gardens: A Memoir of the Beales, the Maysles Brothers, and Jacqueline Kennedy
By Jerry Torre
Memoir

Storyteller and marble faun Jerry Torre has crafted a fine recollection of the early days of Grey Gardens — how he first met the two reclusive women who lived in squalor, how the filming of the movie with the Maysles brothers changed their lives and some of the glittering gaiety in between. It’s a tale of love, commitment, evolution and reconciliation that will bring the reader closer to the two women who are the center of attention. It’s also a retrospective of Jerry’s life after living in that aging mansion, and how over the decades he lived through the AIDS crisis and eventually how he returned to the story with David Maysles years later.

The classic 1975 documentary movie “Grey Gardens” is a story about Mrs. Beale (Big Edie) and her daughter Little Edie, respectively the aunt and cousin of Jacqueline Kennedy, and how they lead their eccentric lives in their mansion in East Hampton, N.Y. It was nearly an instant cult classic and made the two Edies pop-culture legends. The movie was considered by some a monument, to others an intrusion and to most a curious, flamboyant exploration into alternative lifestyles.

It was heartbreaking to learn how the household was sometimes exuberant, occasionally distressing and frequently bizarre during the early days, yet after the filming of “Grey Gardens,” they were mostly lost and moribund. It’s almost unfathomable that Edie might have been better off with some medication. Her mood swings and tirades bring that thought to the reader more than once. And to read about what the house was like, how they lived in filth and disease for all those years before Torre arrived, is almost palpable and definitely nauseating.

If there is anything missing from the book, it’s the backstory of how the two women got themselves into such a state. But even back in the 1970s, there was little to be said. A brief mention of Jacqueline Kennedy Onassis in a couple of spots was enough to tie her into the women’s lives, but don’t expect more than a few sentences in the novel; she just wasn’t a meaningful part of their story.

“The Marble Faun of Grey Gardens” is a fascinating, revealing look at what is considered the insider’s point of view, though Torre was frequently left out of the house. And it is also somewhat chilling to learn that there are people who have nothing to live on, and just each other to live for.

“Who is Vera Kelly?” by Rosalie Knecht (L)

“The Pervert” by Michelle Perez and Remy Boydell (T)

“Go the Way Your Blood Beats: On Truth, Bisexuality and Desire” by Michael Amherst (B)

Coming July 24, a new release we’re all excited about: “I Can’t Date Jesus: Love, Sex, Family, Race, and Other Reasons I’ve Put My Faith in Beyoncé” by Michael Arceneaux

I am recommending Barbara Browning’s Lambda Award-winning novel “The Gift.” It’s a moving meditation on a landscape of topics ranging from the gift economy, feminism, communism, art and love. “The Gift” begins as a response to a spam email and develops into a conceptual art project exploring what the narrator calls inappropriate intimacies. Barbara Andersen, a fictional character loosely based on herself, sends ukulele covers to acquaintances, friends, lovers and even strangers. I love this book and Browning’s writing is an inspiration.