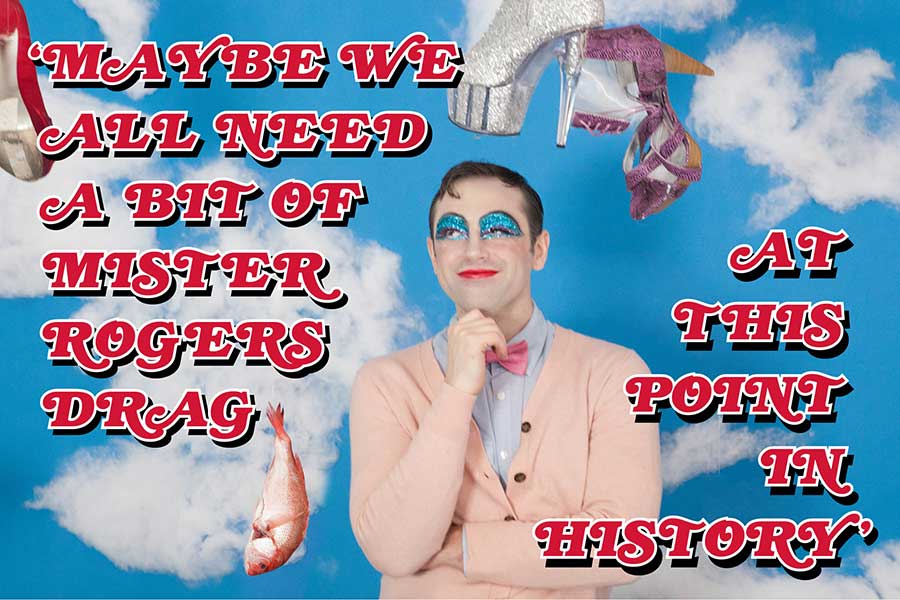 As the Fred Rogers documentary “Won’t You Be My Neighbor” is released, Philly’s John Jarboe and the Bearded Ladies are examining another way into the truths and myths of Mister Rogers’ kindness in a nonbinary drag setting with “You Can Never Go Down The Drain” at the Wilma Theater through July 1.

That Jarboe is offering a twisted take on a popular cultural figure is nothing new. For “Andy: A POPera,” with Opera Philadelphia, he penned a low-budget, performance-art opera about Andy Warhol. For Bastille Day festivities at the Eastern State Penitentiary, the characters of Napoleon and Sojourner Truth made appearances.

But now, for “You Can Never Go Down The Drain,” Jarboe is “Mx. Rogers,” a nonbinary honorific that peruses the mythology and iconography of Mister Rogers as a form of drag; “a kind of earnestness you put on and take off,” he said, while prepping for the stage. “What happens if we feel the things we are feeling and use the silliness and pretend world of drag to do it? In my world, the Land of Make-Believe is the world of drag.”

While he was growing up across the plains of Michigan, Jarboe wasn’t a “Mister Rogers’ Neighborhood” kid; more of a “Lamb Chop” and “Sesame Street” guy. “Rogers has more power for me as an adult, both as a composer, and as a writer and performer. Watching the PBS shows now, I see how deeply thoughtful he was, how measured and how creative.”

What drew Jarboe into Mister Rogers was the music — the songs that the classically trained pianist and writer concocted for his two neighborhoods: one real, and one imagined.

“I am always reframing, resurrecting and subverting nostalgia, particularly musical nostalgia. The wonderful thing about working with Mister Rogers as a jumping-off point is how much heart he brings into the room. Most audiences deeply love him and are made vulnerable in a rare way when he is invoked.“

“Suli encouraged me to place that approach right next to my own of whimsy, spontaneity and naughtiness,”Jarboe said.

He might be slipping into Rogers’ comfy sweaters (“Rebecca Kanach, my costume designer, is a genius,”) but Jarboe is also imagining “what putting on his values, tone and manner now looks like and feels like. If Mister Rogers advocated that we feel what we are feeling, and that all feelings are meant to be felt even if they are not meant to be acted on, what does it meant to feel what we are feeling now as adults living at a time of so much irony? Maybe we all need a bit of Mister Rogers drag at this point in history?”

Under the banner of Rogers’ no-child-left-behind catchphrase “You Can Never Go Down The Drain,” Jarboe said that Americans are collectively going down a metaphorical drain. “We are full of fear and unable to hear each other. I love that Fred used ‘never going down the drain’ as a message of hope and comfort. In our current context, the phrase strikes me as deeply ironic and earnest at the same time.”

For the record, where Jarboe stands politically in 2018 on LGBTQ rights, trans concerns and wedding cakes comes down to his usual position: He stands with the misfit and the misfits’ misfit. “I am a radical faerie, an aspiring witch. My current political tactics include listening, surrounding myself with people who are more radical than I am and getting queerer every day as a protest and comfort mechanism.”

Is there anything for kids once the Bearded Ladies are “down the drain?” Jarboe said yes, but that it also depends on what kind of parent you are. “I think it is a show that would be fine for 13 and up. But kids are always smarter and more sophisticated than we let them be. There’s some swearing and a lot of sexuality in the show, but nothing to be afraid of unless you are one of those parents.”

With “You Can Never Go Down The Drain,” filled with what Jarboe called “gay romps into the land of make-believe and some earnest questions about irony,” what audiences will see are massive costumes, jazz trios, live fish and lots of drag.

“It is a show about whether and in what way do we need irony right now as a political or social approach. You will hopefully learn more about the kinds of drag you are doing every day to get through your long life. What audiences — gay and straight — will get is a good time, a bit of healing and a strong drink.”