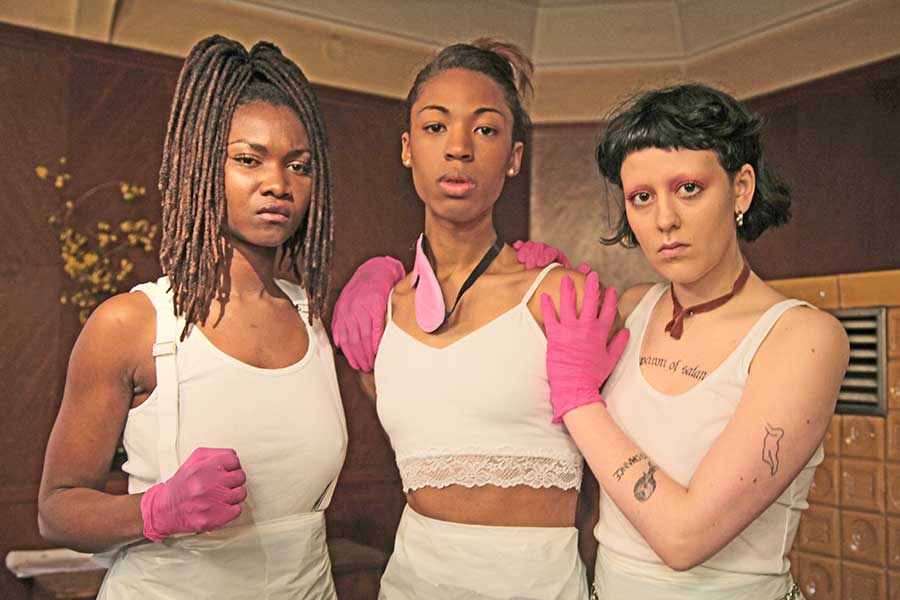 It is an appropriately radical and political response in this era of #MeToo, and LaBruce acknowledged that the attitudes on display in the film should resonate with queer viewers.

“The Misandrists” is set largely in a girl’s school that doubles as the FLA’s headquarters. Big Mother (Susanne Sachsse) trains her girls for world domination. Several factors, however, might disrupt their plans. One subplot features lovers Isolde (Kita Updike) and Helga (Lina Bembe) discovering Volker (Til Schindler), a wounded criminal they hide in the school’s basement. Another storyline concerns an undercover cop infiltrating the school and a third complication involves the discovery that one of the female students — surprise! — has a penis.

LaBruce films “The Misandrists” with his tongue planted firmly in cheek. This feature is a companion piece of sorts to his 2004 film, “The Raspberry Reich,” which was a parody of the Baader-Meinhof gang. In fact, “The Misandrists” pays homage to Ulrike Meinhof, as when a character shrewdly states, “There is no point explaining the right thing to the wrong people.” But LaBruce is also riffing on “The Beguiled” and nunsploitation movies, among other cultural touchstones.

“I wanted to reinvestigate things that I studied in university, such as protest literature and movements. I was going back to those roots, but I wanted to make it entertaining as well, so I made it a genre film and put in cinematic references.

“It is a tricky balance,” he acknowledged about finding the right tone and consistency for his films, which are — for the uninitiated — often quite shocking. “In my films, I critique a particular subject. Someone once said I have a light touch on heavy subjects. Part of it is camp, and the best camp is done with a straight face, not nodding and winking, but playing it seriously all the way through.”

The humor in “The Misandrists” is deadpan and wickedly funny. There is satiric feminist speak where Big Mother talks about her “(wo)manifesto” and ends a prayer with “A-(wo)men.” LaBruce said that the sisters’ prayer in the film, “Blessed be the goddess of all worlds that has not made me a man,” is turning the tables on a Jewish prayer. “That’s a cathartic, fun thing for the audience — especially women.”

The clichés of lesbian-feminist culture are also skewered in “The Misandrists,” especially in a shocking scene after Volker is discovered in the FLA headquarters. It’s best to leave viewers to discover what exactly happens, but the vivid, visceral episode will echo unforgettable scenes such as the “gut fuck” in LaBruce’s “Otto: Or Up with Dead People,” or the “stump fuck” in his classic “Hustler White.”

LaBruce justified these “extreme scenes” in his cinema thusly: “It’s taking your thesis and really extending it to that logical conclusion, that moment that lays bare whatever fetish or revolutionary tendency I’m talking about. It’s a test for the audience as well. How far can I take them with me? My films are cult-y and each has their different cult. My early films gave me permission to be queer and a freak and to express my sexuality.”

The filmmaker traced his penchant to shock people with sexuality back to his punk days.

“I was a queer punk, so I was involved in a radical youth movement. A lot of it was anarchist, and yet there were a lot of rules and, in certain quarters of the punk movement, there was homophobia. So, I was an outsider among outsiders. But in the gay community, I was punk and I was an outsider because my politics were more radical.

“There’s conformity among radical or outsider groups. The trick with that is to still have some provisional membership with those radical groups to participate in them. But you have to be nimble and alert to aspects of those groups — racism, sexism, gay misogyny. We were vigilant and fought against that in the 1980s. You take what’s strategically useful and fight against what goes against your beliefs.”

LaBruce is especially sensitive to how culture today is policing language, desire and sexuality. “The Misandrists,” in particular, aims to subvert and critique patriarchy in a playful way. And the film features many penises to make points not only about masculine supremacy but also about trans visibility.

“I’ve heard some lesbian viewers are not happy with the penises [in the film] but look at the context: It’s about essentialism. To show penises reinforces the idea that girls are so disgusted with men, it sets up this idea of revulsion. The penis is being used not for sexual purposes in the film, but as a diversionary tactic.”

Audiences who appreciated LaBruce’s distinctive, disruptive style of cinema will enjoy “The Misandrists.”

In addition, La Bruce’s film’s politics have meaning and impact for the current socio-political situation.

“People tend to miss this critique of post-feminism, where certain women only want to use the power structures that exist, take them over and let late capitalism play out with a more equal representation of women in an arguably corrupt system. You can say that about the black and gay movements, which had early Marxist thoughts in the 1970s. All that is built into this critique. They are fighting for equity in an unequal system. That’s relevant today.”