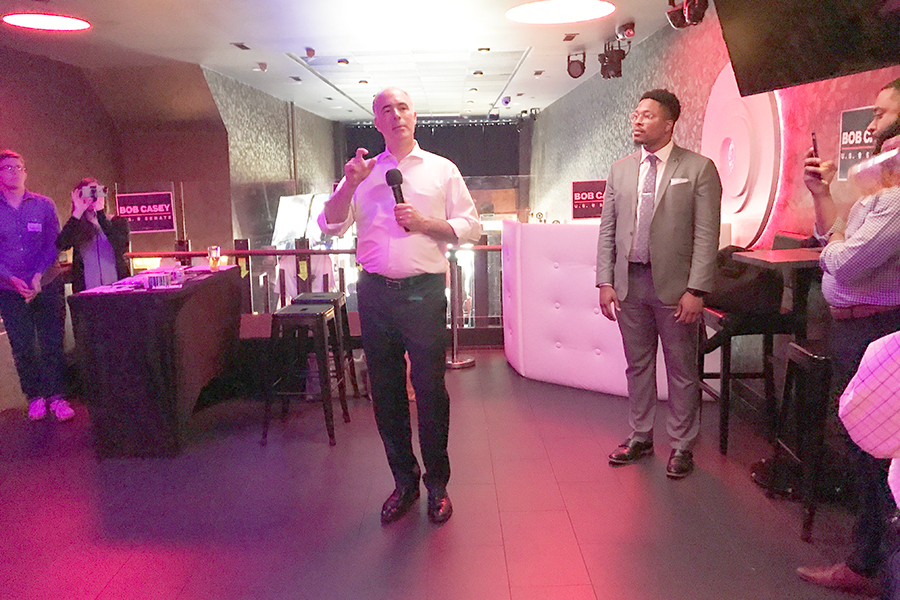 The event, held at the Toasted Walnut Bar in the heart of the Gayborhood, was informally structured. One-on-one conversations between the senator, the other candidates and the various activists and voters in attendance took up most of the hour.
“It’s all about connecting with voters, or, honestly, connecting with people who could get the vote out,” said Kris Walski, a local Democratic Party committee person.
Casey himself expressed pleasure at attending an issues-oriented event as opposed to a fundraising event, the latter of which tends to dominate this phase of the campaign cycle.

“Unfortunately, a lot of the events we have during this time period are fundraisers. It’s a necessary part of the process, of course, but it’s refreshing not to have to ask people to pull out their checkbooks. It’s nice to be able to come to an event where you can just talk about issues, meet people, shake hands and engage with people.”

When asked how this election cycle was shaping up differently, the senator said, “I think we’re in a time period where people are engaged in politics and debates more than they probably ever expected to be. It certainly started before the 2016 election, but since then, people who are Democrats or independents — and even some Republicans — are really concerned about the direction the country is going in.”

Casey said that Trump and the far-right Republicans have energized progressives and liberals in Pennsylvania and elsewhere.
“There’s no question about that. You’re also seeing, or at least I’m seeing, a level of engagement we haven’t seen in quite a long time, if ever. I’d like to say they’re engaged and enraged — people are really fired up and want to do something. I think the intensity favors our side, and this has not often been the case in an off-year election. The president is helping that a lot.”

Kenyatta echoed Casey’s sentiments. “What I want to say, and I say this at every event I go to, is that this is the most important election of our lifetime, of our generation. We’ve got a guy in the White House now who does not believe in the idea of America, who does not believe that our diversity is our strength. It’s important to push back against this very small-minded view that Trump and his supporters have of the world.”

Women make up half, if not more, of our society, Kenyatta said, “and they’re not being represented. When I see all these women running for office — this is what our country is. The real America is running for the first time. That’s important and powerful.”

Kenyatta is the first openly gay African-American to run for statewide office in Pennsylvania, and said he is looking forward to working with openly gay Rep. Brian Sims to form would will be the first such caucus in Harrisburg.

“Oh, we’re going to have a great time fighting for our community. And, — oh my God, I plan to challenge the homophobes in Harrisburg every single day.”

Walski said he’s excited by all the new Democratic blood coming out to run — and that would include himself. He had won his position on the local Democratic committee only days before.

“There’s a lot of newer voters getting involved,” he said. “A lot of women in particular.”

“This is the year we can begin to impose some accountability on the Trump administration. We’ve had a pretty difficult 18 months or so, but as much as I know I will be under attack by outside groups who don’t believe what we believe, as much as I know there will be tough days in this campaign, I have confidence we will get to Election Day and win.”