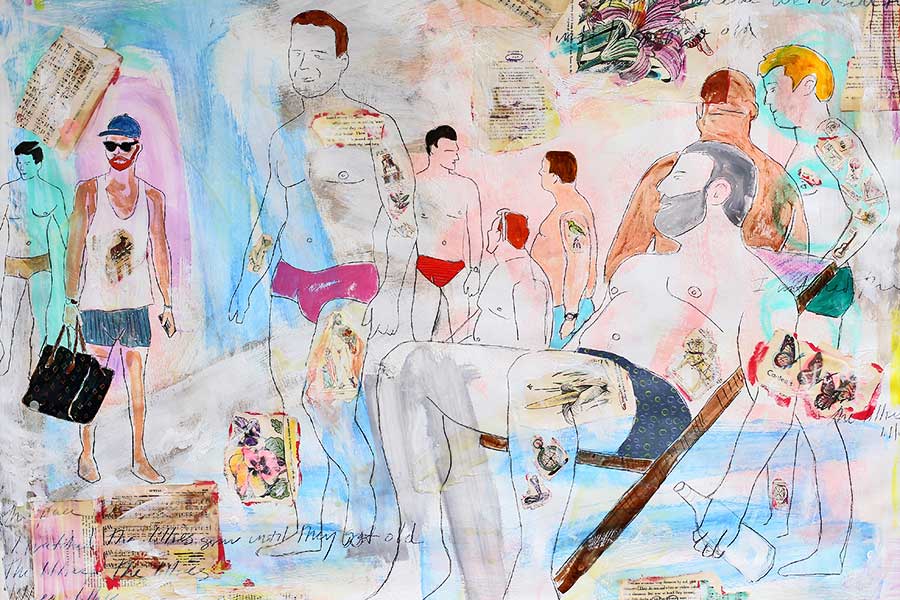 Under the collective title “Queer Frames of Resistance,” the three artists, all with remarkably different styles, take on how each of us functions within the framework of an often-hostile society. They express their disparate notions of visibility and resistance against heteronormative expectations.

One of the exhibiters, Uta Fellechner, presents a deeply personal, eternalized view of resistance. Her works constitute photographic collages that serve as self-portraits, illustrating a different aspect of herself and of the world as she perceives it.

“I’m a lesbian feminist and I’m an artist — have been since my high-school days,” she said. “Being a lesbian feminist is obviously difficult in this society. So, production of self-portraits is an act of resistance. The self-portraits I’m showing have been in the making for at least 10 years. They’re quite the opposite of selfies. They’re attempts at self-analysis and assessing the world I live in as what I call an outsider. I’m also a refugee/immigrant from World War 2 Germany, so I’m an outsider on several scores.”

Fellechner said her upbringing allows her to view the world from more than one perspective. She recounted how she grew up very poor, but later got a scholarship to an Ivy League university, giving her insights into society at both ends of the economic spectrum.

Andrew Sedgwick Guth’s work is more illustrative, portraying scenes of gay life one might not normally equate with “resistance” — play spaces and resort locales such as Provincetown.

“The paintings are narrative-based; the people pictured exist in spaces that are safe havens,” said Guth, for whom the creation of these refuges from the real world, these “safe havens,” is a form of resistance.

“These are places where anyone can be any sort of person they want to be; to be themselves entirely without any fear of oppression, especially from hetero culture. But the people who make these spaces, these refuges, they end up leaving these temporary hideaways to go back to their homes.”

The last of the three artists, Jordi Sabate, would rather his audience bring its own definitions of “resistance” to the exhibit.

“I show the bodies without any background or faces so that people can finish the artwork in their own minds,” he said.

Is he collaborating with his viewers? “Yes, exactly. They can finish the image and the meaning themselves.”

“We are showing our bodies, ourselves. We are queer, and we are showing that we are proud of who we are, of what I am. Pride as resistance.”

“Queer Frames of Resistance” is on display through June 29 at William Way LGBT Community Center, 1315 St. The exhibit is free and open to the public. For more information, visit waygay.org.