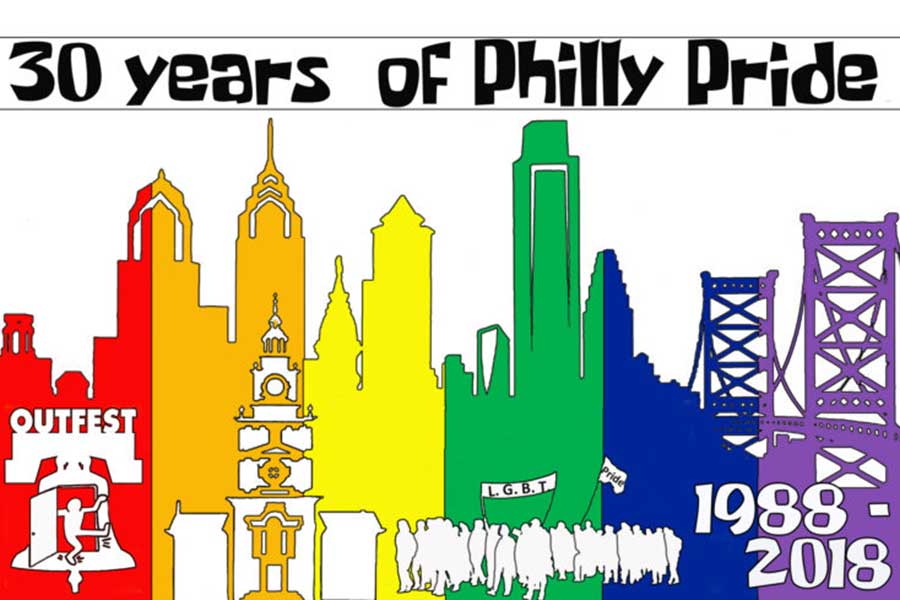 This year marks the 30th anniversary of Philadelphia Pride. Over the last three decades, Pride Day has evolved from a small, impromptu march to the largest LGBTQ celebration in the region. Today, Pride offers more inclusive spaces to commemorate past LGBTQ victories while highlighting an ever-expanding spectrum of sexual orientations and identities.

Evan Thornburg, deputy director of the Mayor’s Office of LGBT Affairs, said the definition of pride has evolved to reflect the entire rainbow community.

“Pride now means trying to create space for every perspective within the LBTQ community to say that ‘I’m here.’ We didn’t always see the entire community represented. Now we have a chance to change that.”

Daiyon Kpou, co-founder of Her Moves Philly — a collective of LGBTQ millennials — said that more representation of marginalized groups within the community, including queer and trans women of color, is creating more opportunities for progress for her generation.

“The community is doing better with its inclusivity of every identity under the rainbow. We’re progressing our understanding of the different intersections of identity and the disparities that are sometimes against us. We now have more power to work against that and create our own spaces and opportunities,” Kpou said.

Heshie Zinman, founder of the Elder LGBT Initiative, who has celebrated the last 30 years of Pride, said that advances in rights are a result of collective hard work from the entire community.

“We have seen great progress in gaining rights for LGBTQ people and pushing our society to be more inclusive and welcoming to people of all orientations and identities,” Zinman said. “This hasn’t happened just by chance, but rather as the result of dedicated advocates, activists and allies who have been out and visible in pushing for change.”

Chris Barlett, executive director for William Way LGBT Center, said the fight for LGBT equality is far from over.

“I’m fortunate to have been around for 30 years of celebration. We need to continue showing our pride by continuing this fight. What the community has accomplished over the last several decades has been monumental, but we all know the work isn’t done.”

Contemporary Pride celebrations trace their roots back to the 1970 Christopher Street Liberation Day march in New York City, a demonstration commemorating the Stonewall Riots the year before.

In 1972, several of Philadelphia’s political-activist organizations, including the Gay Activists Alliance, the Homophile Action League, Radicalesbians and groups from Penn State and Temple University came together to produce the city’s first Gay Pride Parade.

In 1988, an impromptu Pride march from 13th and Locust Streets coincided with a rally planned at LOVE Park hosted by the Lesbian and Gay Task Force, now known as Philly Pride Presents. The organization wanted to produce a parade and festival at Penn’s Landing each year to continue the community outreach and visibility. Since then, the parade has become an annual event.

Franny Price, executive director of Philly Pride Presents, described how the celebration has grown to include nearly 200 organizations.

“In the early days, we had about 50 festival spots and now we have around 180. Most of our vendors are organizations, some of which have been marching with us since the very beginning. Now, our Pride day is a huge networking day for our LGBT groups,” Price said.

The first organizations to march in the parade included the Philadelphia Freedom Bands, the Metropolitan Community Church of Philadelphia (now known as Whosoever MCC), Dignity Philadelphia and ACT UP, all of which still participate in the celebration today. Philly Pride was the first to perform HIV testing outside at pride events as well as being the first city to introduce youth grand marshals, said Price. The small rally grew to be the largest pride celebration in the region, now attracting over 25,000 people each year.

“The number of spectators watching the parade has drastically changed over the years. When I came on in 1998, we used to only see people at the kick-off and then a few at the reviewing stand. Now, there are spectators on the entire parade route and thousands at Independence Hall leading up to Penn’s Landing,” Price said.

Zinman said that looking forward, the community should provide support to the aging elders who fought for equality in the beginning.
“It is important to realize that those of us who were around for Philadelphia’s first Pride 30 years ago are now getting older. When we look at the priorities for our LGBTQ communities moving forward, it is critical that we focus on ensuring that we as LGBTQ people are able to age successfully with the necessary care and supports. Those of us who fought so hard over the past decades in the fight for LGBTQ rights are going to need our communities to step up and support us as we grow older.”

Larry Benjamin, Mazzoni Center’s director of communications, said the responsibilities of securing LGBTQ equality should go beyond the community itself.

“We celebrate our pride every single day just by living. I want everyone else to continue celebrating our pride past this month. I want to see more people outside of our community celebrating our accomplishments, fighting for our protections, advocating on our behalf.”