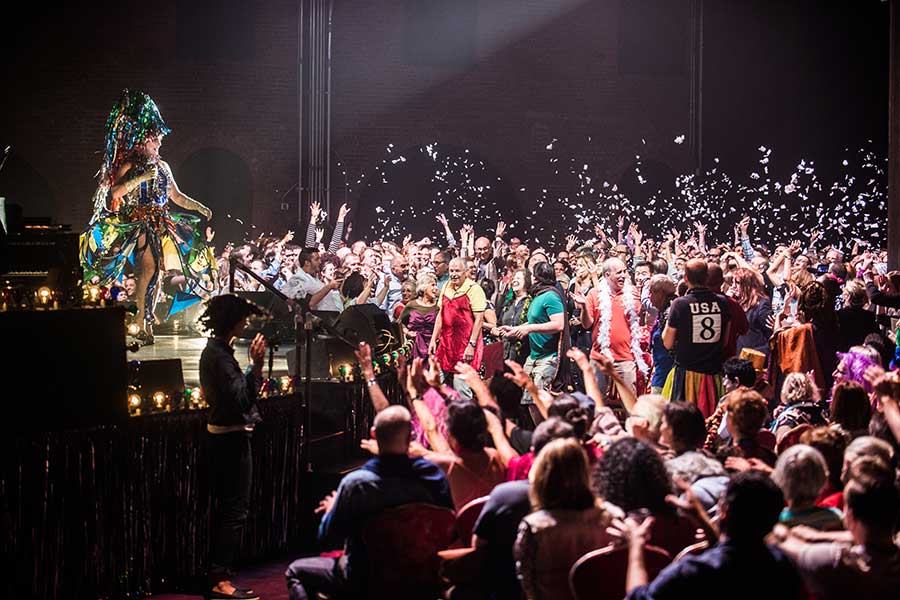 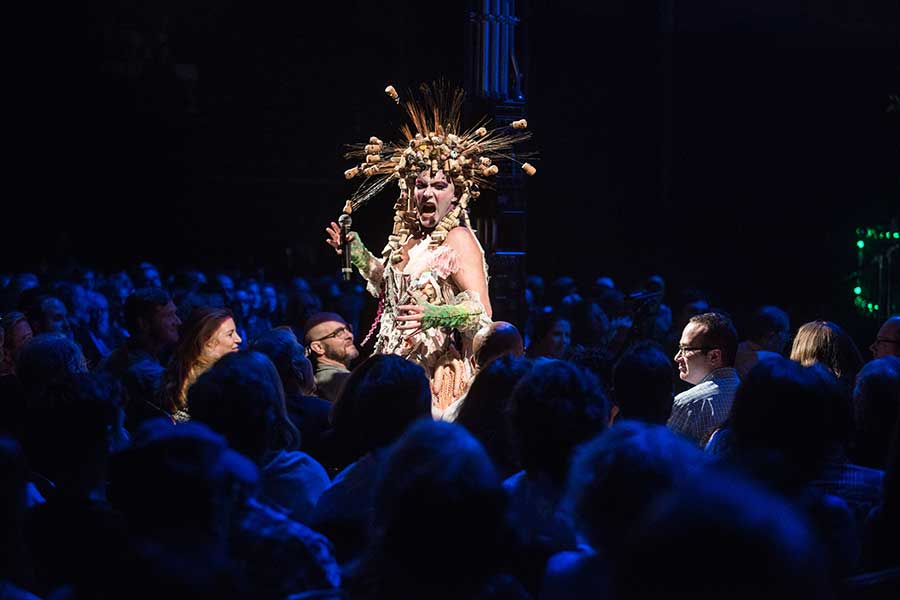 “I’m not making the show about identity, but it’s definitely the queerest show you will ever see”

Philadelphia International Festival for the Arts is presenting a special performance of out artist, singer and writer Taylor Mac’s internationally acclaimed “A 24-Decade History of Popular Music” June 2 and 9 at the Kimmel’s Merriam Theater.

Philadelphia-based artists including Martha Graham Cracker, Tangle Movement Arts and Cynthia Hopkins will be part of the 24-hour performance covering 240 years of pop-music history, featuring a decade each hour.

The performances will take place in two 12-hour pieces one week apart. Mac once performed the show as a 24-hour marathon in New York City in 2016.   He said the marathon in Philly will be the last in the USA.

“It’s going to be a challenge. I’m excited to see how it all shapes up. It tears me apart, but there’s something very satisfying about it. It’s emotional for the audience to go through all that material. The show isn’t about history — it’s all about how we’re in this together. It’s fascinating to hang out with a group of people for a really long time and go through the history together. It does something. It changes the audience in a way, and galvanizes the performers. Even though I feel exhausted, there’s a beautiful peace about it when it gets to the end.”

Mac reaches back to the birth of the country for this epic musical journey.

Which decade resonated with him in particular? All of them, he said.

“They’re all my babies. I love performing all the various decades. There are certain decades where it was harder to find music that I cared about. I had to do a little more digging, but everything has something interesting.”

Mac said he adds his own twist to the music, turning a maudlin song into a punk version, for example, or taking a Ted Nugent number and rendering it sentimental.

“We’re always taking things and transforming them to use it for our purposes. I don’t always pick songs because I like them. Every so often, there’s a song in the show that is a really bad song, but we’ll do it because there is a purpose to it.”

Through 240 years of American music history, songs remain an effective way to convey a message or a sentiment to the masses, said Mac.

“From ‘Amazing Grace,’ which helped to inspire anti-slavery laws that would pass in England long before America, popular songs tend to be written to rally the masses to something, whether it’s to fight a political cause, or to fall in love with something. A lot of war songs have survived. It feels like the songs back then had an agenda of placating the status quo, making you feel comfortable with God and country. That also shows so much about our history. As we get later, the songs celebrate more of the full range of the human being instead of telling you that you should be just one thing. We could choose to be sophisticated and have good politics now and be progressive, or we could choose to ‘make America great again.’ The argument that people are a product of their time doesn’t really hold, because there are lots of different types of people who were all products of their time.”

Mac said that as the years progress, the choices of popular songs increased exponentially, making it harder to figure out what to put into the show. It was easier to figure out which songs wouldn’t work with the performance.

“It became challenging to choose as it got later, because it’s an onslaught of material.” With regards to the early 19th century, Mac said it was hard to figure out exactly when these songs written and that there were fewer options. “By the time I got to the later material, it was nice to be able to not have to figure out how to make a particular song work. That song doesn’t work? Let me go find one that does, because there are 20 other songs with a similar theme.”

Advances in technology made the show a lot easier to research and write, he said.

“If I had done this show 20 years ago, I would have had to get a travel grant to be able to go to all the libraries to do the research.Now everything is online. We have so much access now.”

The point of the show is to provide a fuller, richer history of the United States as told through its songs, Mac said.

“I’m just here to remind people of what they’ve forgotten, dismissed or buried. I feel my job is to figure out what the questions are and hopefully the audience will try to figure out the answers for the rest of their lives.”

Mac said that while LGBT writers and performers are woven into the fabric of popular music throughout its history, the show isn’t about spotlighting their contributions to the art form.

“Yes, there were tons of queers who have contributed to music, but that is not what the show is doing. What it does do is it hangs out with the queer — I’m a big ol’ queer, along with a lot of other queer performers for the 24-hour show. That’s not to say that I don’t spend a lot of time with Walt Whitman or try to figure out who the dandy is in ‘Yankee Doodle Dandy,’ or hang out with some of the great queer songwriters. I always think of identity as a sub-theme. It’s always present and the reference for contextualization, but it’s not really the point for me. I’m not making the show about identity, but it’s definitely the queerest show you will ever see.”