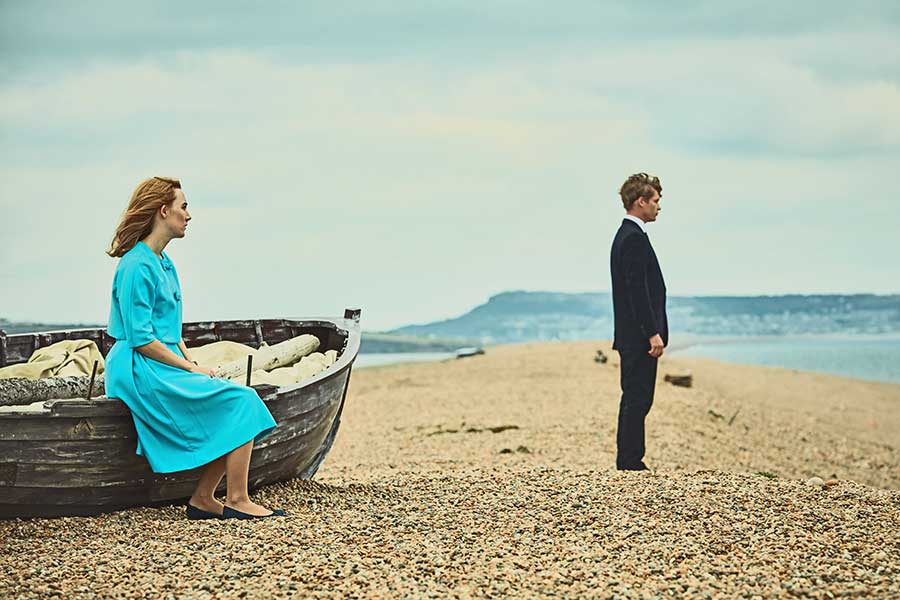 Adapted by the author, the story opens in 1962 at a seaside hotel where Edward (Billy Howle) and Florence (Saoirse Ronan) are spending their wedding night. The inexperienced couple is about to consummate their marriage, and their anxiety is palpable.

A series of interlocking flashbacks reveals moments from their past that generate both meaning and emotion as Florence and Edward conform to the social expectations of the times.

On the phone from the United Kingdom, Cooke explained why making “On Chesil Beach” appealed to him.

“I had an amazing empathy for the characters’ situation and struggle, and that world they are [trapped] in. I was born four years after the film was set. I remember that uptight, formal, repressed English world Ian brings to life so vividly. I had not seen that moment in film. It was refreshing to make a film about sex and intimacy.”

The film is absolutely claustrophobic in the hotel-room scenes as Florence and Edward attempt to have sex. Their nerves are evident in close-ups Cooke provides of Florence’s foot playing with her shoe or her hand balled up in a fist. These “tells” expose as much about her character’s insecurity as Edward’s fumbling reveal about his own.

The filmmaker captures the pressure-cooker environment of the hotel room, the bedroom and even the titular beach to visually convey the constricting society of the ’60s.

“We worked with this idea of two people in the wrong place and the wrong time. They are living in their parents’ and grandparents’ world. The interior spaces were 30-40 years old. They were in the wrong environment.

“We wanted to do something more sustained and in keeping with the period of the ’60s; to use the camera to tell the story more than the editing,” Cook added. “We used oppressive colors to make the characters feel hemmed into the world created by their parents. In 1962, the ’60s revolution hadn’t kicked in yet. They are in that postwar austerity with Edwardian values.”

Cooke provides a necessary contrast using flashbacks to depict the couple falling in love in natural settings. It is in these scenes where viewers understand who Florence and Edward really are and how well-suited they are to one another. Or, as the director said, “they are trying to find their own truth, rather than their parents’ expectation of who they should be. They are caught up in being what’s expected of them. I think the idea of living other people’s lives is something you understand as a young person — you conform to the idea of doing what’s right. They live with a lot of ghosts and history that has been handed to them — there’s a toxic nostalgia.”

The drama in “On Chesil Beach” pivots on a decision Edward makes when Florence suggests how they could live as a married couple. The point of this key moment is Florence’s modern belief that marriage doesn’t have to be defined by what the outside world says. It’s a point Cooke takes to heart, saying that, even today, “same-sex relationships don’t always abide by conventional ideas. LGBT folks make their own stories and are not defined by mainstream society’s expectations of what they should be.”

The filmmaker acknowledged that one character’s rash decision proves the harm of acting in anger. “The lack of self-knowledge is a dangerous thing,” Cooke said.

Which brings him to reveal aspects of his own life.

Does Cooke believe in love at first sight, as the characters in “On Chesil Beach” do?

He addded that he’s “terribly impatient” — just as Edward discloses is his worst quality to Florence in the film.

“On Chesil Beach” depicts the couple losing their virginity, and Cooke candidly discussed his first time. “When I was a teenager, I had romances and dates with girls — and some were quite nice — but they weren’t me. First time I was with a guy, I was very nervous, but it was like I was at home. It was very important, and sex is very important to our identity. Our deepest selves are there.”

“On Chesil Beach” artfully examines how sex defines us and how we live our truths — and how that can haunt us as well. This well-acted and well-directed drama packs an emotional wallop.