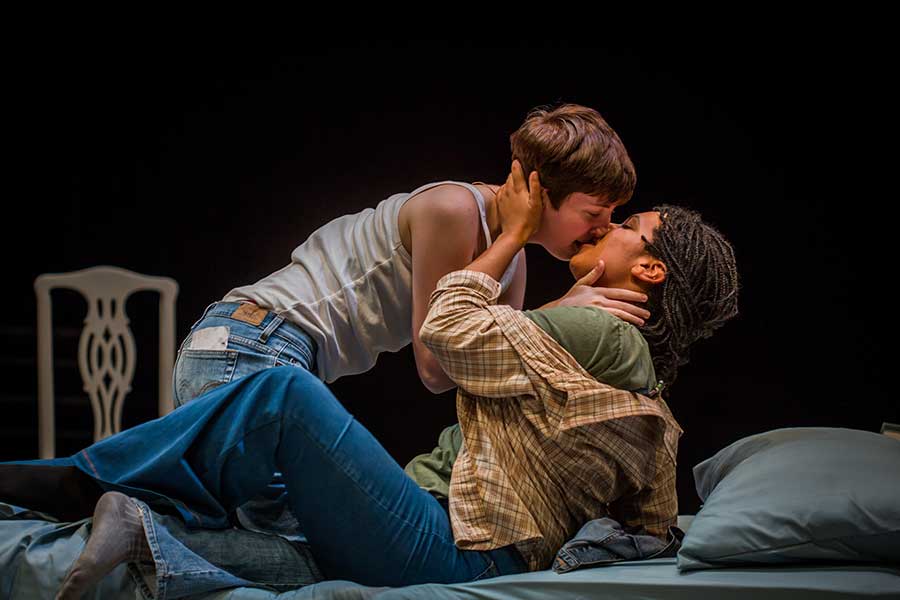 Complicated family issues can haunt us. How we cope, and how they shape us as people, is the central theme of “Fun Home,” the new musical at the Arden Theatre.

“Fun Home” is based on an autobiographical graphic novel by lesbian artist Alison Bechdel, creator of “Dykes to Watch Out For,” the seminal comic strip that ran in gay and lesbian publications nationwide (including PGN) from 1983 to 2008.

The novel illustrates some of the family issues Bechdel has dealt, including her coming-out process in college, but also paints a portrait of her father. Bruce Bechdel was apparently a complicated man, alternately loving and overbearing — and a promiscuous closet case who killed himself not long after his daughter came out.

“Fun Home” was adapted for the stage with music by Jeanine Tesori and book and lyrics by Lisa Kron. The Arden’s master of all things musical theater, Terrence J. Nolan, directs with his usual skill and panache. While the show is structured to pluck at the heartstrings of a mainstream theater audience, and does so effectively, Bechdel’s unique and subtle voice is often lost in all the stagecraft.

“Fun Home” is basically a flashback play. The mature Alison (played by Mary Tuomanen) watches her memories of childhood and youth unfold as she tries to capture them in a series of drawings to process the experiences she is reliving. We see the childhood Alison (Kate Bove) and her parents and siblings, and the college-age Alison (a particularly effective Izzy Castaldi), as well as her first relationship after coming out.

The center of the story, of course, is the complicated relationship Alison has with her closeted-homosexual father, played by Ben Dibble. Bruce Bechdel was a funeral-home director who renovated old houses on the side. He also had numerous affairs with a variety of young men.

Alison grew up adoring her father. But she never really understood him, which complicated matters emotionally for her. She had a hard time dealing with the volatile aspects of his personality, nor did she understand the nature of the many, though transitory, friendships he would form with a succession of young men.

Cartoonist Alison Bechdel is justly renowned for the gentle humor and deep humanity she imbues into her characters. The adaptors have not always managed to capture the tenor of Bechdel’s unique voice — though at times it does shine through, giving the play some of its funniest and most humane moments. The scene where the mature Alison cringes as the college-age Alison makes her first clumsy fumbles into lesbian sexuality is priceless.

By and large, “Fun Home,” as crafted by Tesori and Kron, is an inoffensive, mainstream work intended to appeal to a standard Broadway audience, and mostly it does that. The characters are sympathetic, the children are charming and all the appropriate emotional beats are hit.

What we don’t get is a real understanding of why Bruce kills himself. As played by Dibble and directed by Nolan, we don’t see that Bruce, despite being in the closet, is so troubled, and so the suicide seems to come without context. As such, the character of Alison never really resolves the complicated issue of her father. But then, that could be the point. Sometimes, issues with our parents are never resolved.

As usual, the Arden has put together a fully polished production. James Kronzer’s scenic design is simple yet lovely. In the end, while the adaption of Bechdel’s story is not without flaws, enough of her voice comes through to make “Fun Home” a worthwhile addition to the lesbian/gay theatrical canon.