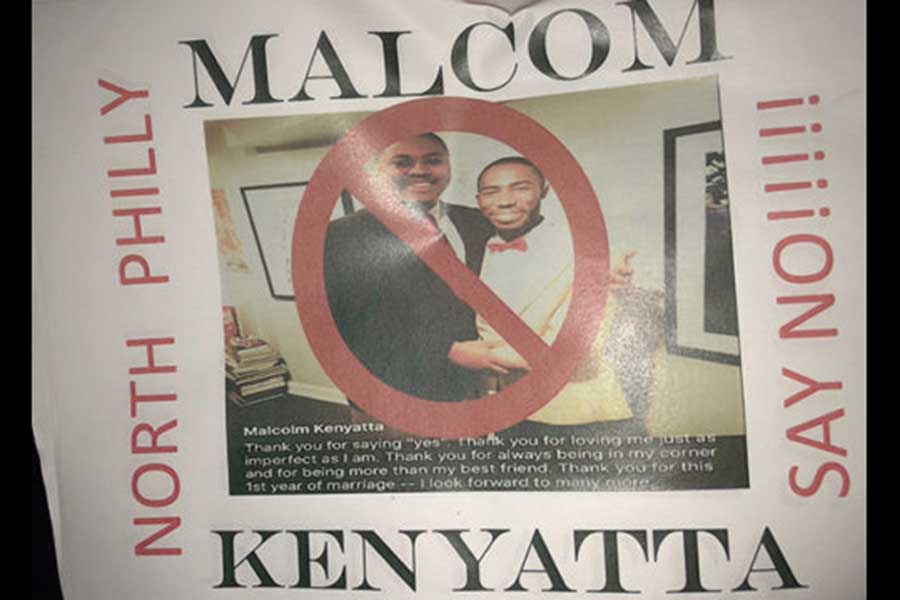 The flier, left on car winshields throughout the 181st District the morning of the May 15 primaries, displayed a red circular “No” symbol superimposed over Terrell Green with his former husband and the words: NORTH PHILLY and SAY NO!!!!!
Green and Kenyatta divorced in 2016.

“I don’t want to call anyone out without having proof, but I want whoever did this to be publically held responsible for spreading hate,” Green told PGN after denouncing the flier on Facebook.

Green, who recently began working at Mazzoni Center, said a lawyer advised him to file a discrimination complaint with the District Attorney’s Office. If an election complaint is filed, the Election Fraud Task Force accesses the complaint and acts in accordance with the statute, said a spokesperson for the D.A.

The Election Fraud Task Force was created in 2014 to investigate and prosecute allegations of election-day criminal activity. The task force is part of the D.A.’s Special Investigations Unit and is staffed by assistant district attorneys and detectives.

Sheila Simmons, Kenyatta’s campaign manager, told PGN the candidate doesn’t plan to take legal action regarding the flier.
“At this time, Malcolm will not be going after those responsible for the flier. He’s more focused on preparing for the upcoming election in November,” Simmons said.

Green said he’s considering proposing a policy to City Council to protect people who are connected to public figures running for office.
“There’s no room for bigotry,” he said. “We’re in the era of the ‘Time’s Up’ and the ‘Me Too’ movements. I have to stand up for myself.”