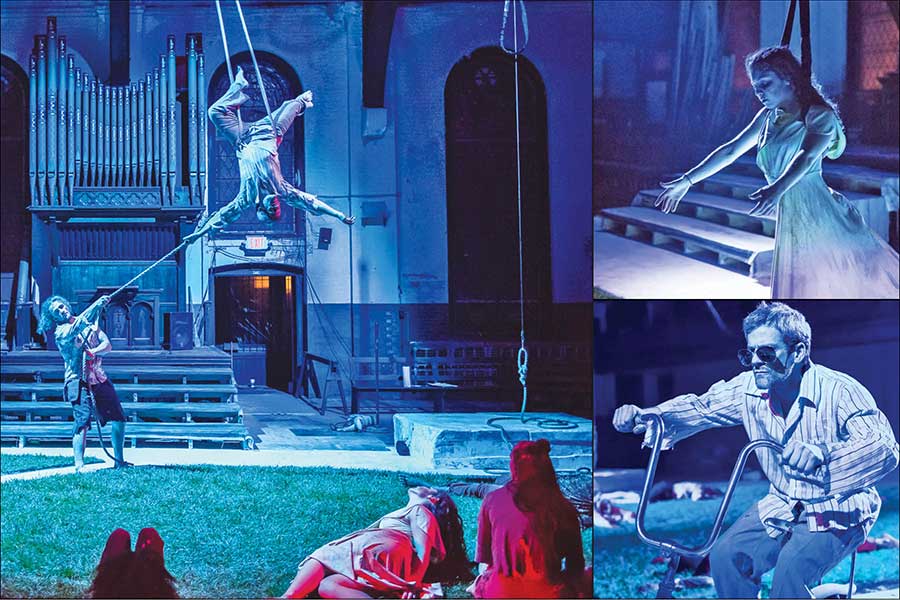 Over the past few years, Brian Sanders has established a reputation as one of the most creative and imaginative choreographers/performance artists in Philadelphia. His imagery and designs are often startling, with always-provocative explorations up and down the spectrum of sexuality and gender expression.

Sanders tackles subject matter that pushes the boundaries of most people’s comfort zones. His new show, “Dancing Dead IPX,” is no different in this regard.

Sanders plays with the cultural fascination with all things zombie, presenting imagery both serious and delightful.

The performance takes place in the Shiloh Baptist Church in South Philadelphia, a ramshackle Gothic-tinged space that has seen better days. Still, the church retains copious echoes of its glorious past. And, ironically, the space’s decay actually plays into the whole zombie-apocalypse motif, allowing the action to play out on an appropriate landscape.

The performance is divided into three sections: In the introductory segment, the audience is ushered into a large room with long, wooden dining tables and a high-vaulted ceiling, reminiscent of a viking mead hall. After a while, performers come out and climb on top of the tables, with pairs of dancers going through choreographed motions of affectionate massage and lovemaking — the spirit of life, so to speak.

Part two involves the audience being escorted to a different room lined with scaffolding draped with plastic sheeting. The audience had to stand and peek through the draped plastic to watch the unfolding scenarios in the center of the room.

The final section took place in the church’s main sanctuary — certainly was the grandest space of all. The performers were made up as zombies and went through various scenarios illustrating what it’s like to be dead — or undead.

But the most fascinating aspect of the final section was the addition of the aerial component, eliciting a circus-like thrill of watching performers perform daring feats. But there was also a poignant thematic effect. At times, it looked like these were the dead, striving to reach heaven — and not making it.

As usual, Sanders and his troupe JUNK provide a thrilling, thought-provoking and challenging experience, with some of the most provocative imagery and choreography to be found. Sanders proves that even the dead have much of value to say to the living; we just have to be willing to hear it.