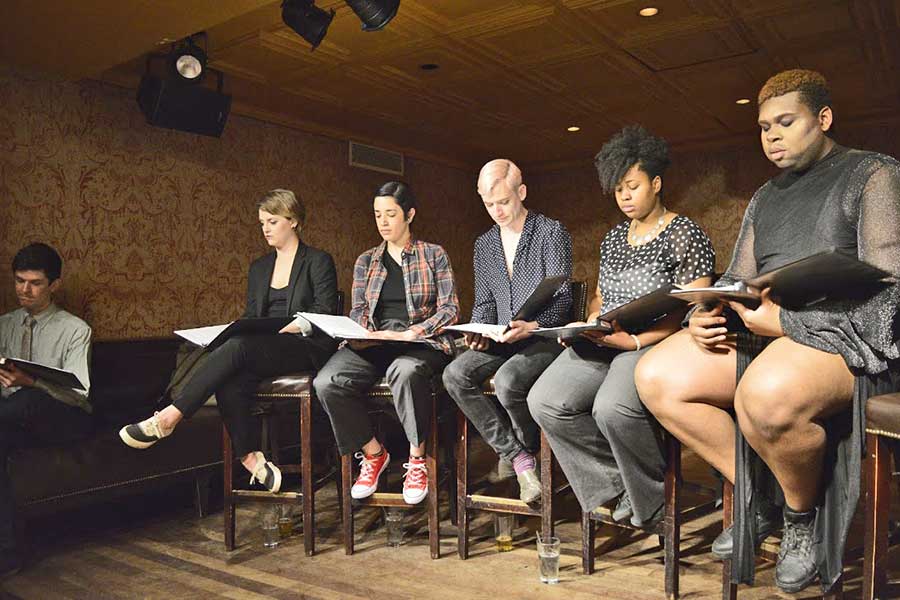 “Speakeasy” tells the story of a young gay man who becomes a superhero by expressing the power of his feminine side.

The play’s full title is “Speakeasy, An Original LGBTQ Play,” written by Ben Deane, with music by Ian Johnson. It came out of an idea by Johnson who also serves as the project’s producer. Johnson approached Deane, the writer said, “knowing I had an interest in superheroes and comic books, and asked if I was interested in writing about an original queer super hero. I said I would love to.”

Deane was tasked with the job of coming up with the plot and breathing life into the character. Everyone wanted the project to be kid-friendly, he said.

“It appealed to me because it’s important for kids to have someone to look up to, particularly queer kids.”

Play director Theo Wampler then joined the project. “I had also worked with Ian Johnson before. He knew that one of my hot topics was toxic masculinity as well as the power of femininity, and those are two things that are present in this script.”

“Speakeasy” is being copresented by Qunify and PLAI Arts, two groups whose purpose is to promote events that foster the development of the gay community.

“These are groups that seek to provide opportunities for queer artists to perform — and get paid,” said Johnson. “What we are trying to do here is provide a consistent platform for LGBTQ artists to perform. There are a lot of queer performance artists out there who perform in these obscure spaces, but they’re just not done justice.”

“I understand the process foundations have to go through, but how do you define what the process means to people? For instance, the first time I attended a drag show, it amazed me in terms of what the performers brought to it. It changed
my life.”

Johnson was so inspired that he put his own career as a professional opera singer on hold to serve as a facilitator for these queer artists.

“I am super-passionate about this. When I saw a drag queen for the first time, and the pride that this performer had, and the love in the room for that performer … ”

He said the performance inspired his own coming-out process. “I realized that I’m OK — more than OK. And that drag queen in that moment was like a superhero to me.

“I never realized that I had sabotaged myself by condemning my own femininity — and I had it good. We don’t get to value it in ourselves because the hate is so much louder. We’re still so far away from where we need to be. So far.”

Wampler agreed with Johnson. “Gay representatives in the arts are often so timid, so bland. That’s one of the things we want to do with this show: to show that femininity can be powerful. Our community has so much work to do with ridding ourselves of toxic masculinity.”

“The dream, the ultimate fantasy is for ‘Speakeasy’ to spawn a franchise, like on Netflix,” mused Johnson. “Something like the queer ‘Avengers’ or the queer ‘Justice League’. Come on — that’s just so cool! That’s the dream.”

“Speakeasy, An Original LGBTQ Play” with music by Ian Johnson, will be performed May 25-26 at the Asian Arts Initiative, 1219 Vine St. For more information, visit Qunify’s Facebook page at facebook.com/qunify. For ticket info, visit eventbrite.com.