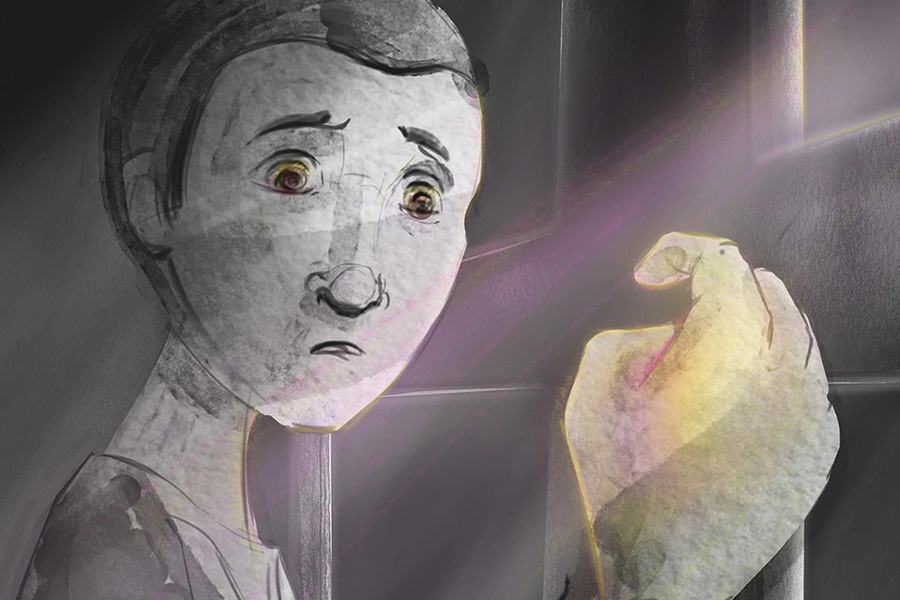 Philadelphia-based animator Nick LeDonne keeps his work personal — a quality that has won over audiences and peers in his young career.

His 2016 short film, “Hanging,” portrays his experience attempting suicide after he’d suffered multiple personal traumas. The piece was screened at more than 70 international film festivals and won at least a dozen awards.

LeDonne, also an instructor in the new digital-media program at the Pennsylvania College of Art and Design, is completing work on two more animated shorts: “Dear Dad,” in which he captures the emotions and guilt he felt after his father’s death; and “Reaching Out,” about his coming-out experience and gaining acceptance for his sexuality.

The twenty-something LeDonne is shy but engaging, and creates art that is both painful and life-affirming. He discovered art as therapy as a young teen.

“I took animation first in high school. Seeing my drawings move attracted me. I grew up loving Disney films; they were an escape for me. It was difficult for me to make friends, so animated content and video games gave me comfort. It was something I could do on my own, and it was always there for me.”

But art school really hooked him on animation. “I didn’t want to do sculpture, or painting, or anything else.”

It was in art school where he made “Hanging,” a thoughtful five-and-a-half-minute documentary that required 6,000 hand-drawn images in pencil and fine charcoal.

“I drew nonstop for six months and, rubbing my hand against the paper, I started to bleed — my hand was like sandpaper!” he recalled.

LeDonne developed the storyline for “Hanging” by literally drawing issues with his family, his sexuality and bullying, all of which exacerbated his low self-esteem at the time.

“I probably should have gone to therapy,” the artist said, “but I took to animation, art and film to talk about my feelings. I wanted to yell, so I yelled through my film. That was a way to talk about my emotions without actually having to talk.”

Like LeDonne’s other films, “Hanging” is deliberately wordless. He storyboards his scripts instead of writing them, he explained. “It’s about the visuals. I’ll get an image. Once I have a core [emotional] beat of the story I want to tell, I do the drawings. I’m stronger with a pencil than words.”

LeDonne prefers not to use voiceover or dialogue because he wants the audience to think about the meaning of the images. “If I use words, there is a battle for the audience to believe what they hear. If I make viewers think, ‘I need my mom,’ it creates more engagement than if I tell someone, ‘Don’t hang yourself because your mom loves you.’ It is a way of making the viewer come to an epiphany, or moment of love and acceptance, by showing, not ‘telling’ them.”

Among the processes LeDonne employed to create “Hanging,” he repeatedly relived parts of his suicide attempt. For example, he described, he had to think about the best way to draw a belt, and the image and emotion of squeezing it around his character’s neck. It was “soul-crushing to live that trauma over and over for months on end,” he said.

But, he added, the pain was worth it, as the result was “very impactful. I leave a message and let people think about it. It would be hard to watch my shorts in live action. The realness of the trauma is done without a real person, and it’s easier to watch.”

LeDonne’s two forthcoming shorts, also fraught with emotional baggage, will be released later this year and in 2019. The artist said he recognizes his work is important — for himself and others.

“I think the issues I speak on are simple and honest. When I make film, I’m having a communication with someone. I am talking about depression, feeling sad or missing someone. ‘Dear Dad’ is about my late father and my wanting him to be there. It’s about not having anyone to talk to. My other films are about wanting love and acceptance.”

LeDonne shared some work-in-progress clips, featuring hand-painted shadows and other visually arresting images that are part of dream sequences and flashbacks. The scenes from “Dear Dad” capture his complex feelings over his father’s death, even if the story differs from the filmmaker’s real life.

LeDonne also has turned his art into social service. He visits schools, community centers and other organizations to present “From Hanging to Hang ON,” his own story of depression, suicide and perseverance.

“I’m not looking for pity,” the artist added. “I’m just telling my truth and the events in my life the best way I can.”