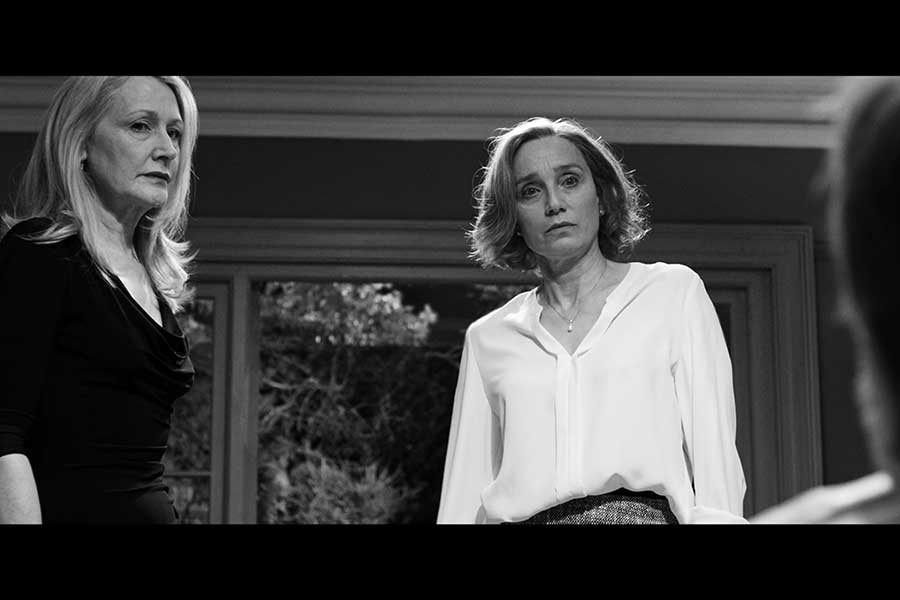 Writer-director Sally Potter’s “The Party,” is a deliciously bitchy black comedy. The film opens Feb. 23 at the Ritz Five and the Bryn Mawr Film Institute.

Shot in luminous black and white, the film’s striking first scene has Janet (Kristin Scott Thomas) opening a door, looking frazzled and brandishing a gun. Cut to earlier that same day. Janet is preparing to have some guests over to celebrate her victory at becoming the Shadow Minister for Health. As she toils in the kitchen, taking congratulatory phone calls, her husband Bill (Timothy Spall) settles into a chair in the living room. He has a hangdog expression that belies something troubling him. He gets up mostly to change the record on his beloved phonograph.

Enter the guests. First to arrive is Janet’s supportive and sarcastic bestie, April (Patricia Clarkson), and her German life-coach boyfriend, Gottfried (Bruno Ganz). He spouts platitudes and opinions about medicine. April’s favorite refrain appears to be “Shut up, Gottfried.” Viewers could get quite drunk if they sipped liquor every time April belittles her partner, or anyone else in the film for that matter.

Next to arrive is Martha (out actress Cherry Jones), who went to university with Bill, and has become Janet’s longtime friend. April describes Martha as “a first-class lesbian and a second-rate thinker.” Martha’s wife, Jinny (Emily Mortimer), arrives later with some big news. She has just been to the doctor and is expecting triplets.

Last to turn up is Tom (Cillian Murphy), a “wanker banker” in an expensive suit who rushes for the bathroom to snort some cocaine to get through the evening. Tom’s wife, Marianne, works for Janet and was one of Bill’s students. Tom’s nervous energy is disruptive, but so is the gun he’s carrying in a holster under his jacket.

As “The Party” gets into full swing, champagne is served. Someone pops the cork and breaks a window. It’s a harbinger for many bad things to come, starting with Bill’s uncomfortable announcement that jeopardizes his future with Janet. Various other devastating revelations follow.

Potter’s film may feel like a theatrical chamber drama, set entirely in one location, with a small cast of characters, and at times “The Party” does feel a bit stagy, but the minimalist quality works in the film’s favor. Clocking in at a brisk 70 minutes, this lean, mean comedy-drama zips along from crisis to crisis as it covers and satirizes politics, feminism, academia, class, medicine, sexuality and fidelity.

Some of the histrionics are amusing, as when Janet slaps Bill — twice — after he says something that infuriates her. In contrast, some of the action is more of a symbolic distraction from the greater conflicts, anger and recriminations taking place in the living room.

As the long night wears on, all of the relationships hung together by delicate threads start to unravel. Potter may be making a point about the changing nature of couples, gay or straight, but she also may just be creating pot-stirring drama for the sake of entertainment. The seven characters are all rather horrid. Moreover, the black-and-white cinematography, extreme closeups and stark lighting magnifies the ghoulish, shadowy aspect of everyone’s faces.

The dialogue is also hardly complementary. After one particularly intense moment, April tells Janet, “I believe what you are experiencing is a feeling. I can see it is unpleasant, but like all feelings, it will surely pass.” The film is filled with such witty lines delivered by a uniformly strong cast.

Thomas gets to play a range of emotions as Janet, whose moment of professional triumph quickly descends into a series of emotional defeats. The actress deftly whipsaws between pride and anger, cheerily chatting on the phone one minute and then facing an ugly, painful truth the next. In contrast, Spall appears nearly catatonic through “The Party,” sporting a dazed look on his face that is actually quite comical.

Even funnier is Clarkson, who steals the film with her droll remarks. Her character’s bitterness refreshingly cuts through any social niceties, such as her line, “I expect the worst of everyone.” Given all of the bad behavior on display in “The Party,” one can’t blame her.

In support, Ganz and Jones play their insufferable characters to the hilt, but never push too far into parody. They make good foils for April, and that friction is what makes “The Party” crackle.

Rounding out the cast, Mortimer and Murphy have the weakest roles, but they have several intriguing scenes together, adding an interesting background to the main action.

“The Party” may not be enjoyable for the characters, but this slight, satisfying film provides good fun for viewers.