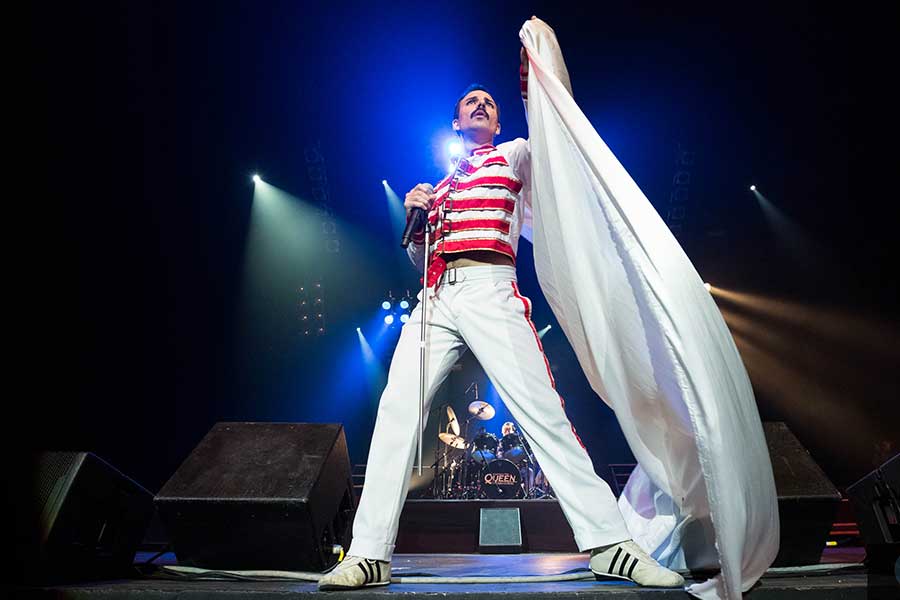 The internationally renowned God Save the Queen will celebrate its 20th anniversary with its first mega-tour of the United States. The Queen cover band will present a spectacular recreation of its classic namesake concert experience, with this season focusing on the ’80s Queen and a short-haired, mustachioed Freddie Mercury as opposed to the ’70s long-haired late lead singer.

The members will fly from their native Argentina for a stop at the Tower Theater in Upper Darby Feb. 24. The original Queen played the same theater Jan. 31, 1976, and this cover ensemble — called Dios Salve a la Reina in its native land — got a thumbs-up from Queen’s original tour manager Phil Murphy, when he claimed the group was “as good as the real thing.”

This interview with singer Pablo Padin and drummer Matias Albornoz occurred via email with the help of a translator, since neither man speaks English.

PGN: God Save the Queen/Dios Salve a la Reina has been together for 20 years. What is the secret of the band’s staying power? How can you stand each other for going on two decades?

MA: Well, we’re certainly blessed by all the success we’ve had over these 20 years. The audience has been our key to success [at] to our shows in Europe, Latin America and [the] U.S. We are a family. We spend months together and we get along pretty well.

PGN: Before the four of you were God Save the Queen, did you play in other cover bands or, for that matter, create original music?

MA: We formally started with Queen. It was and still is our passion. We just love their music. In fact, it was that passion that convinced the band’s originators — me, Mathias, and Pablo — to start this group. We had that passion in common: Queen!

PGN: Once you started, how did you make decisions on what to do and how to do a tribute?

PP: It started as something very small. Our friends and family insisted that we play the set in bars and suddenly the venues started getting bigger and bigger. This year, we’ll be [celebrating] 20 years as God Save the Queen, and we’ve had the privilege of playing in Europe, Latin America and the U.S.

PGN: Did any of you ever attend a Queen concert?

PP: We haven’t had that pleasure, but we did attend a concert of Brian May, guitarist of Queen — a legend and an incredible experience.

PGN: What were the criteria for your version of “Freddie Mercury”? What did he have and why?

MA: First, the talent has to be there, and then how much you can look alike. Freddie had one of the most powerful voices ever, and the technique isn’t easy to maintain during a show. But Pablo? Just wow, the talent and the look is there.

PGN: There are other Queen tributes out there. What makes yours stand out?

PP: We’re trying to make the audience feel that they’re watching the real Queen, with all the respect they deserve. We take care of every little detail, looking to be as close as we can to the real and original Queen in terms of clothes, lights and sound.

MA: Because it is the hardest version to play live. We try to sound like the record. For example, we do every sound live in “Bohemian Rhapsody.” That’s the challenge. And we’re pretty happy about the results. When we met Freddie’s personal assistant, he told us we were the best Queen tribute ever, such an honor coming from a person who saw Freddie many times live in concerts.

PGN: You sing in English but do not speak the language. What problems arise from that fact?

MA: Our singer memorizes the lyrics and studies Freddie as much as he can. The idea is to have the best Queen experience possible. You have to be very careful with pronunciation in order to deliver a quality show.

God Save the Queen will perform 8:15 p.m. Feb. 24 at the Tower Theater, 69th and Ludlow streets, Upper Darby. For more information or to purchase tickets, visit http://bit.ly/2GseG4E.