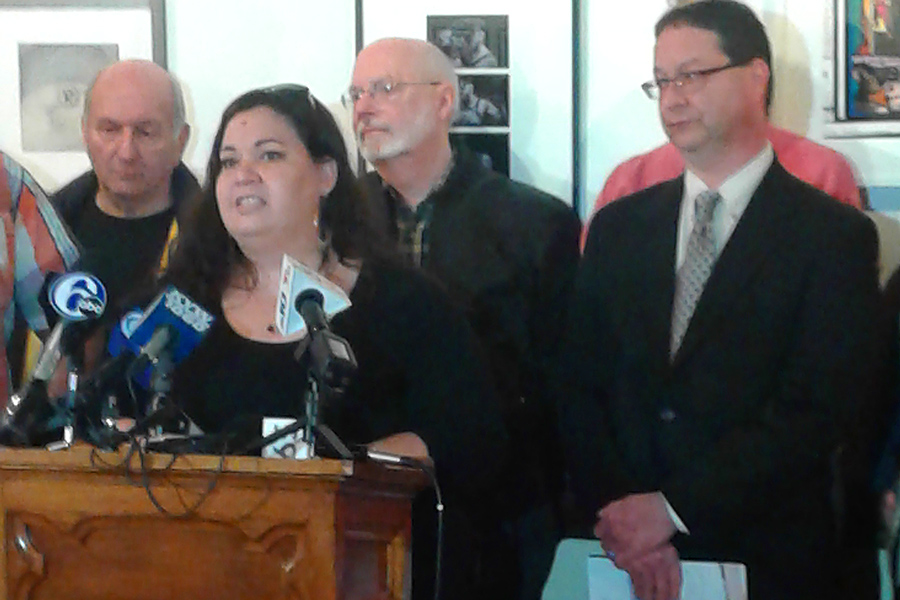 The husband of a gay undocumented citizen from Mexico spoke out Monday with support from local organizations at the William Way LGBT Community Center.

Jose “Ivan” Nuñez and his husband, Paul Frame, were married April 9, 2016. The couple was in the process of petitioning to change Nuñez’s immigration status when plans were derailed. Nuñez was picked up by Immigration & Customs Enforcement (ICE) agents on Jan. 31.

The couple were petitioning for the I-130, a petition for an Alien Relative. The day of the routine interview with the offices of U.S. Citizenship and Immigration Services, ICE agents came into the room and took Nuñez away in handcuffs. Nuñez remains detained in York County Prison.

Frame, a Chester County native, stood with support from other local organizations to speak out on his devastation.

“This is not an easy thing for me,” Frame said as he wiped away tears. “It’s very difficult for me to understand. We were going through the process the correct way.”

Frame met his husband in August 2014 while attending a wedding.

“I looked across the table and there was a good-looking Latino man there,” said Frame, recalling the day he met his husband.

In July 2015, Frame took a trip to Las Vegas with Nuñez and proposed. The two were married April 2016, making Nuñez eligible for a green card.

“I had no doubt that morning we would go in and everything was going to be fine, I was very confident,” Frame said. “I’m a very strong person. I’ve been through a lot in my life. I’m scared. I’m nervous and my heart bleeds for Ivan. I am mad because we were trying to do the right thing.”

According to Frame, Nuñez originally fled Mexico out of fear of being killed for his sexuality.

Gonzalo Peralta, the attorney of Frame and Nuñez, was also present Monday, and stated that Nuñez has no criminal charges. He was detained strictly for being undocumented.

Representatives from Juntos, a Philadelphia-based immigrant human-rights group and GALAEI, an organization advocating for LGBT Latinx people, were also at the press conference speaking out in support of Nuñez and Frame. The organizations launched an online petition in hopes of pressuring ICE to release Nuñez from being detained. The petition has more than 700 signatures as of presstime.

“Ivan’s case, in particular, is really striking a chord with our communities and if anything, it highlights, particularly for our communities, the importance of doing intersectional work,” said Nikki Lopez, GALAEI executive director.

Miguel Andrade, of Juntos, also spoke at the conference advocating for the public to stand in support and take action.

“It is no understatement when I say that immigrant communities are under attack right now under this current administration,” said Andrade, who added that what should have been a quick interview and happy moment going through the process ended with heartbreak.

Frame frequently goes to visit Nuñez in York but it takes an emotional toll, he said. Frame and his attorney, with support from the community, said they will continue fighting to bring Nuñez home.