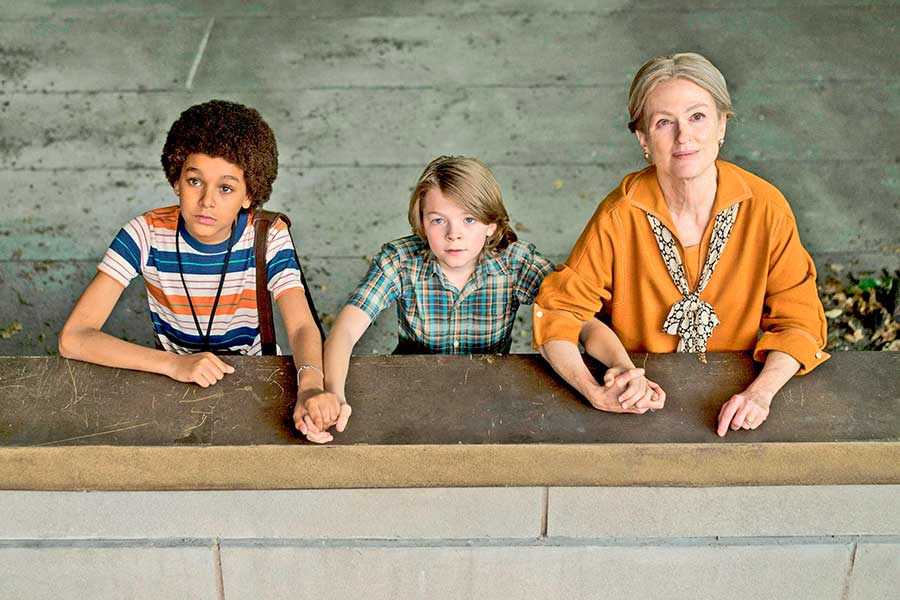 Openly gay filmmaker Todd Haynes continues to reinvent himself with his ambitious new film, “Wonderstruck.” The compelling drama, which opens in area theaters Oct. 27, including at the Ritz Five, is an adaptation of the young-adult novel of the same name by out author Brian Selznick, who also penned the film’s screenplay.

The film toggles back and forth between two parallel stories set 50 years apart. “Wonderstruck” opens in Gunflint Lake, Minn., in 1977. Ben (Oakes Fegley) is a 12-year-old boy haunted by dreams of wolves. His mother (Michelle Williams) recently died in a car accident, which means Ben now lives with his aunt and cousins. While grappling with the loss of his mother, he has an accident of his own, becoming deaf after lightning strikes the wires of a telephone he was using; Ben was making a call to search for his possible father, a man named Danny, who may be in New York City. Escaping from the hospital after his accident, Ben heads to New York, alone, to find Danny.

The other story concerns Rose (Millicent Simmonds), a young deaf girl in 1927 Hoboken, who is obsessed with Lillian Mayhew, a silent-screen actress. Unhappy at home, where her tyrannical father (James Urbaniak) is frustrated with her behavior, Rose escapes to New York to find Lillian. Other adventures ensue.

“Wonderstruck” features some coincidences and contrivances as these stories unfold and connect, but the plotting is not the point. Both Ben and Rose are seeking their own identities in their search for someone else. That they are hearing-impaired only adds a degree of difficulty to their efforts, but it also allows them to be more creative in how they achieve their goals. Viewers will be rooting for both characters as they encounter successes and setbacks.

Haynes shrewdly tells the two stories. He films Rose’s tale in black and white and without dialogue. He uses music cues and jolts to create emotion, and the effect — like watching a silent film — is admirable. Haynes even goes to the painstaking effort of including a sequence from a fictitious silent film, “Daughter of the Storm,” starring Lillian Mathew. (A sly homage to the Lillian Gish classic “Orphans of the Storm,” no doubt.)

Haynes’ exquisite craft goes beyond just that amusing sequence; he recreates the gritty urban milieu of 1977 New York City in the summer for Ben’s half of the film. Ace cinematographer Ed Lachman shoots the initial scenes of Ben entering the city in a sepia tone that gives them a nice contrast to the bustling pre-Depression-era black-and-white shots of skyscrapers and sidewalks in Rose’s episodes.

“Wonderstuck” eventually has Ben meeting Jamie (Jaden Michael), whose father works in the American Museum of Natural History. The boys soon become fast friends, and chase each other through the museum. Eventually, they spend an overnight in a secret room where the lonely Jamie helps Ben discover something about a painting of wolves in the museum.

Meanwhile, Rose is seen having her own adventures in the museum, 50 years earlier. These scenes, which are shot in an expressionistic style that emphasizes light and shadow, involve her questioning where she belongs, a theme that Ben’s story also addresses. A wondrous, climactic and didactic sequence connects them.

While Haynes’ film may be geared for the tween set, who will likely appreciate the plucky characters and their adventures, adults may find less emotional resonance. It’s strange that the film tells two intriguing stories, but they somehow lack power.

However, “Wonderstruck” is a fable, and as such, it enchants because Haynes never lets the valuable messages of finding one’s independence become heavy-handed. He may try to generate some suspense as when Ben’s wallet gets stolen, or during a sequence where Rose is being eyed by the police and security guards, but these events only reinforce the characters’ determination and resilience. They build viewers’ sympathy for Ben and Rose, who try to achieve their goals.

The performances by the young actors are uniformly strong. Simmonds is especially notable for her expressiveness in her wordless performance, while Fegley and Michael have a terrific affinity. In addition, Julianne Moore provides strong support as Lillian Meyhew.

“Wonderstruck” is a cinematic delight because Haynes creates images and set pieces that carry the story along silently. He renders museum rooms (like the one Ben and Jamie hide out in) that mirror the “Cabinet of Wonders” in a book that inspires Ben’s quest. The use of sound, light and shadow, as well as the music and camera zooms, further enhance the period details in each section of the film, and provide a strong sense of time and place. On a purely technical level, Haynes’ film is remarkably well done.

Which is why it is frustrating that “Wonderstruck,” while certainly impressive, has such limited feeling.