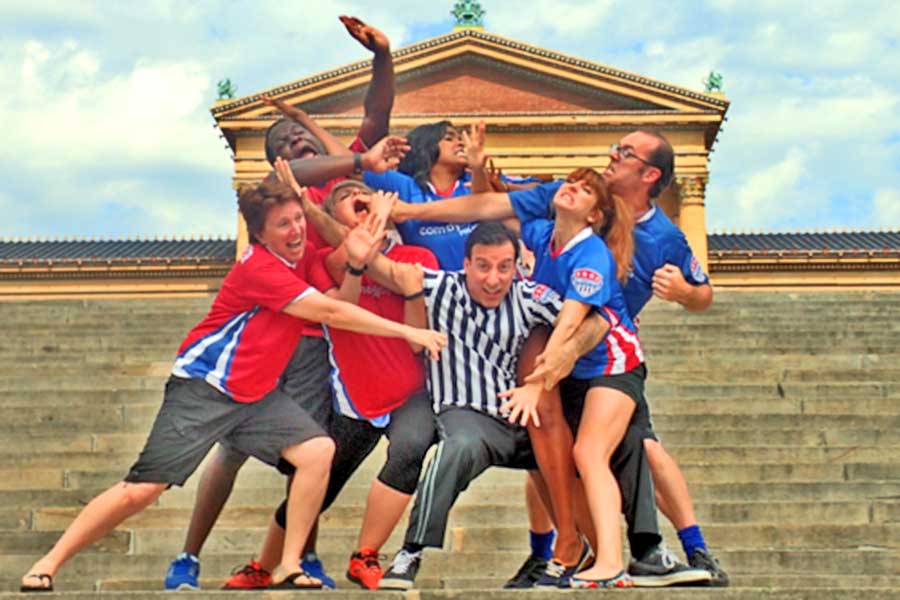 Locals who love to laugh have been in a longtime embrace with ComedySportz Philadelphia, the competitive improvisational sketch-comedy troupe based on Sansom Street. The troupe celebrates its 25th birthday this weekend with two anniversary performances at the Mandell Theater at Drexel University.

The rules of attraction and interaction (there’s nothing but interactivity with the audience) for CSz are: two teams playing rounds of improv games, based on shifting topcis, battling for the audience’s approval, with a referee timing and calling fouls and an announcer providing color commentary. The audience then acts as judge and juror, often winding up as part of the staged action.

While star-studded CSz alumni include Jennifer Childs (founder of 1812 Productions), Scott Greer (Barrymore Award-winning actor) and Thomas Fowler (“Jimmy Kimmel Live!”), for PGN’s purposes, there are a handful of LGBT-related players such as Brian McCann (joined 1997), Jessie Preisendorfer (1998), Kelly Jennings (1992) and Dan Rich (2013), who have been part of the troupe’s history and founder Don Monterey’s vision.

PGN: Where were you living when you first got to CSz, and what sort of comedy were you known for?

BM: I was living in Wilmington when I first auditioned — a horrible one as I just didn’t know what I was doing. I choked so badly. Consequently, I did not get into CSz. Two years later, I moved to Philadelphia, saw they were having auditions again and really wanted to go in just to prove to myself that I could have a better audition — and I did. I was accepted. I was an actor at the time and doing a lot of comedic shows but aside from “Whose Line Is It Anyway?” I had very little experience with short-form improv.

JP: I was and still am living in Delaware County. I wasn’t doing comedy at the time I auditioned. But I attended one show, signed up for classes, took the beginner class and I was hooked. They did clean, smart comedy and I became quite addicted.

KJ: I graduated from the drama department at Syracuse University and, after a summer-stock gig in Massachusetts fell through, I returned to Philadelphia to work as a resident company member of Hedgerow Theatre. When my contract was up there, I started auditioning. I never viewed myself as a comedian and I hadn’t done any improv work except as an acting tool before auditioning for Comedy Sportz. It was the most fun, unusual audition I had done but I was certain I wasn’t going to be cast. I was a “classical actor.” I didn’t “do” comedy, and I had seen really poorly performed comedy improv in college and I knew that improv wasn’t for me. The evening after my audition, I received a call stating I was cast. I thought I’d be found out after a few weeks; they’ll see they made a big mistake.

PGN: What is your comic signature, and how do you think you added to the troupe?

BM: I hate to pigeonhole myself as a player but I guess I would best be known for playing the pedantic, arrogant buffoon. Comedy is math.

KJ: No one pressured me to be someone or something I wasn’t, in terms of being a certain “type” of comedian. I drew on all my professional acting training to play characters and the deadpan “straight-man” characters. And, of course, I love when I have the opportunity to play improvised Shakespeare.

PGN: Did everyone in the troupe know you were LGBT? How does your personal life play into CSz?

JP: I thought I was pretty much out when I got into the group; turns out, I was not. There was an email survey floating through the group and when I answered, I got a couple replies telling me I was brave. I didn’t feel brave, but I still think it’s funny that I came out by doing a jokey survey.

BM: I didn’t hide the fact but I didn’t make an announcement either. There was a company member that I was attracted to and I didn’t want to scare him off, so I may not have been as forthcoming as I might have been. I don’t know how much of my personal life I bring on stage aside from it being me up there with my world view. I know, however, that I bring the skills I learned at ComedySportz into my regular day-to-day life. I listen more intently to others. I’m able to think on my feet, which is something I was not very good at before. And I think I’m just more fun at parties.

KJ: I didn’t know anyone coming into the company so I can’t say what they “knew” or didn’t know. I have always been out. As far as I know, I was the only openly gay cast member at CSz for the first few years. As far as how I bring my personal life into CSz, this is an interesting question. It is one that some of the gay players in CSz Worldwide have been discussing privately. For myself, while I would very much like to play a character more like myself, I don’t think it would be received without some discomfort, so I don’t tend to deliberately choose to play a gay character. I also have concerns about audiences expecting a stereotype or non-gay players portraying a stereotype. Others may feel differently; perhaps I reflect more of an attitude from the early ’90s than early 21st century.

ComedySportz celebrates its 25th anniversary with shows at 7 and 9:30 p.m. July 22 at Mandell Theater at Drexel University, 3201 Chestnut St. Tickets are $25 for adults and $22 for students, seniors and military with a valid ID. Tickets and more information are available at www.comedysportzphilly.com.