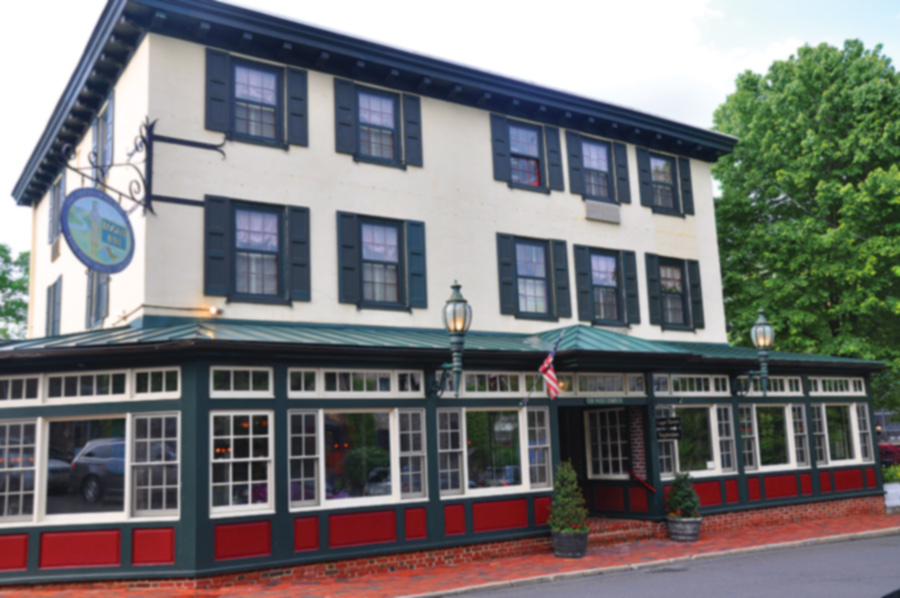 It’s been said that New Hope has more ghosts and spirits per square foot than any other town in the country. At times, it seems that you can’t walk through a doorway without hearing a ghost tale. People are practically dying to tell you one. If you take one of the Ghost Tours of New Hope (ghosttoursofnewhope.com), you’ll hear several. There’s quite the variety of ghosts in this town. They are painters, hitchhikers, children and Revolutionary War-era men and soldiers. Let’s rewind.

New Hope used to have a ferry at the end of Ferry Street. George Washington appropriated it and every other conveyance leading up to his Christmas march on Trenton in December 1776. A perfect sentry point was where the Logan Inn stands since its establishment in 1727. It is the oldest continuously operating inn and tavern in Bucks County. Many people visited or stayed there and many sick during the war died there. Legend has it the cellar was used to store the bodies of soldiers killed in the area. It’s said to be the most haunted building around.

Near the Y-road juncture where Bridge and Ferry streets meet, you’ll find the New Hope/Solesbury Library. There’s a marker describing how the land around it and up to the Wedgewood Inn was once a colonial fort. If you walk back from the street anywhere along there, you can see the military advantage of seeing all the way to the river and the down the roads leading up the hill.

Not long ago, at the Wedgewood, renovations uncovered a tunnel beneath the building that has been generally identified as a munitions store during the revolution, but may have also been used as part of the Underground Railroad more than 100 years later. A trap door under one gazebo that allows for exiting the house surreptitiously was also found.

Perhaps the most intriguing ghost story and local favorite might be the tale of butcher/painter Joseph Pickett, a Victorian-era resident ghost. Pickett was a butcher by trade and a painter by desire. He lived on Mechanic Street and had a studio upstairs in his house. His most recognizable work was painted while he stood on an outcropping behind the Wedgewood Inn. It is called “Manchester Valley,” and was posthumously hung in New York City’s Museum of Modern Art. A copy of it is in the dining room at the inn. Another local artist has recaptured it on the wall over his garage between Pickett’s home and the inn.

He died in 1918, but his spirit is said to linger. He is spotted in an apron with red on it; it may be blood or it may be paint. Most interestingly, he’s been seen in more than one place. He’s been viewed in his former home and is said to pull hair in the room where his studio was. He’s also been spotted in the gazebo on the outcropping behind the Wedgewood Inn. Sometimes it’s just a glimpse of something red through the shrubbery that when you get around to look is gone.

The ghost tours are what you make of them. In the summers, they’re a pleasant evening diversion before or after dinner. In the fall months and especially around the end of October, the lantern-led tours, the feeling of nature ebbing and a chill in the air that may or may not be weather-related all lend to a potentially spirited night of ghost tales and warnings. Take heed.