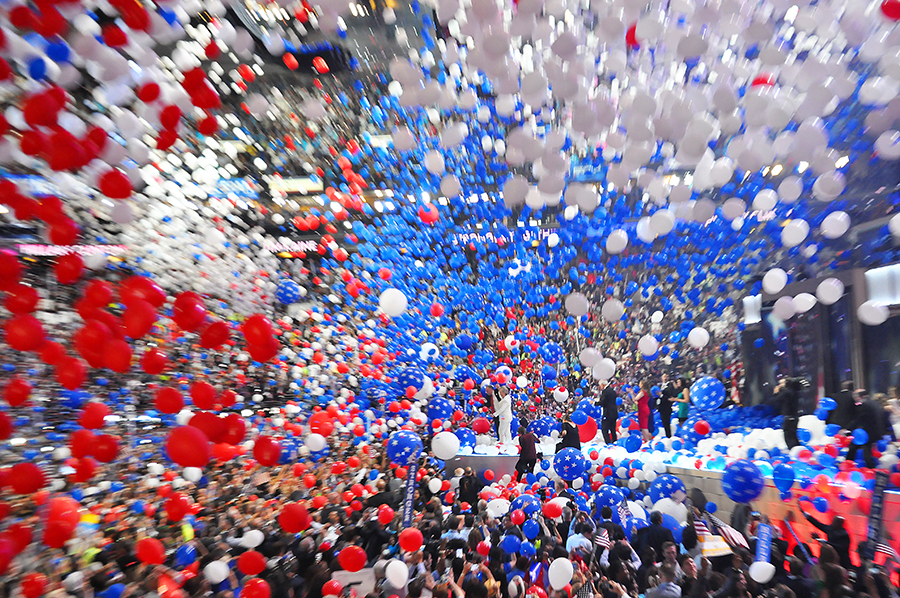 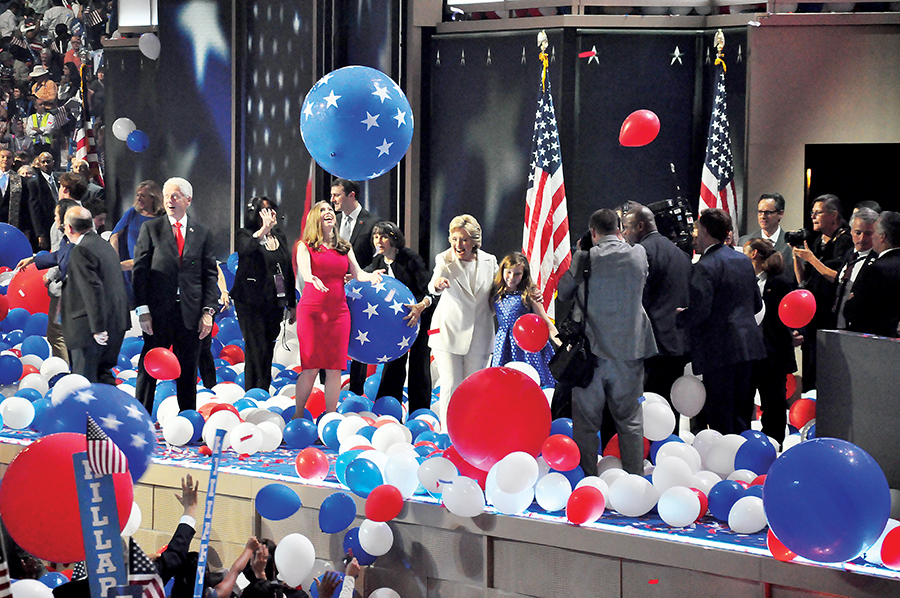 It was clear from the start of the annual photo review that the bulk of our favorite photos, and some of the best to date, would be from the Democratic National Convention. With a spectacular red, white and blue backdrop, some of the finest orators in the country and thousands of cheering, happy people, well, what could go wrong?

The unfortunate truth that we are stuck having to live with is looking back at the DNC photos and finding it isn’t all soothing and embracing; they are also a reminder that a whack job is about to drive our great country (Yes, Donald. It was already great.) into a cesspool of disaster. Yet that little pebble in the shoe aside, there were quite a few other moments and images we thought you’d like to see again and recall the joy, success, triumph, humor and sadness that marked 2016.

As far as the DNC is concerned, the party’s over! We had a ball covering the convention this past summer and recovered nicely through plenty of rest and alcohol. It was truly a highlight of the year, maybe for several years. While the outcome of the election was less than stellar, it must be admitted that the event and the coverage were equally spectacular. These are a few of our other favorite people, places and things. 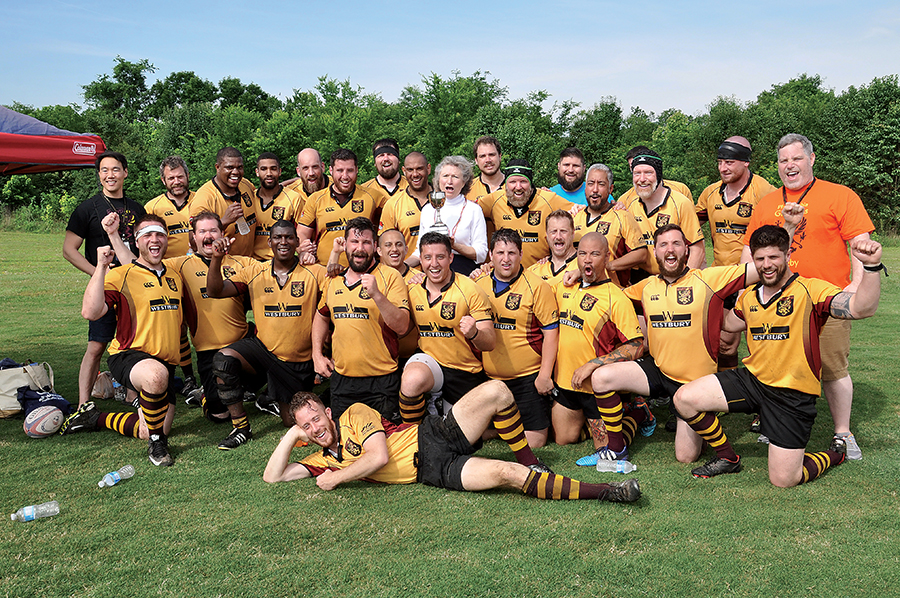 Mark Bingham was an out, proud gay rugby player from San Francisco who was one of the leaders in the thwarted Flight 93 suicide attack on Sept. 11, 2001. Every two years in his honor, international gay rugby players get together somewhere in the world to play for the Bingham Cup and Hoagland Cup, named for his mother. The defending Hoagland Cup winners Philadelphia Gryphons RFC lost the cup in 2016 in Nashville, but did get to spend some time with Alice Hoagland and get this great group photo. 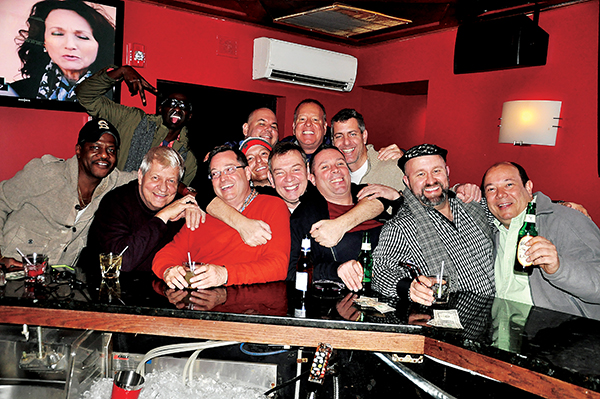 After the sorrowing closure of Westbury the year before and Sisters in 2013, the community took another hit when Venture Inn on Camac Street was bought and closed as a gay bar and remains closed as any type of business to this day. The staff and regulars enjoyed the closing-day shows, drink specials (clear the shelves!), some entertaining camaraderie and a few emotional moments. Many of the staff are still in the service business. Bob “Sandy Beach” Hitchen is at Stir, Tommy Martinez is at Tabu, Henry Brinton works at Valanni. A solid salute to all of the former Venture Inn staff and patrons! 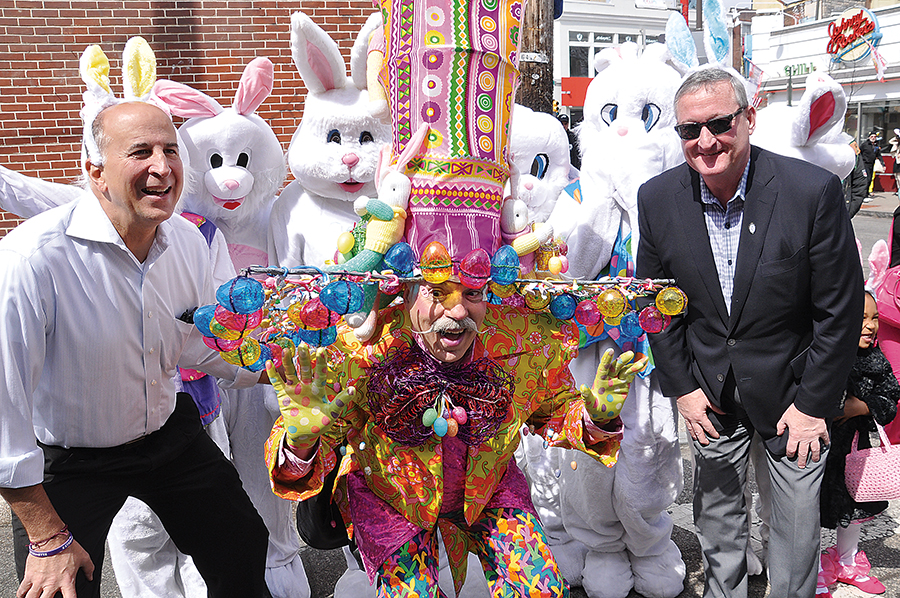 Well, Easter ears, at least, and an over-the-top hat! There is something joyous about seeing people in serious lines of work out doing their jobs and having fun at the same time. Thanks, Mark, Henri and Jim, for everything you’ve done in 2016. “Ears” looking at you!

4. Making a meal out of a cocktail 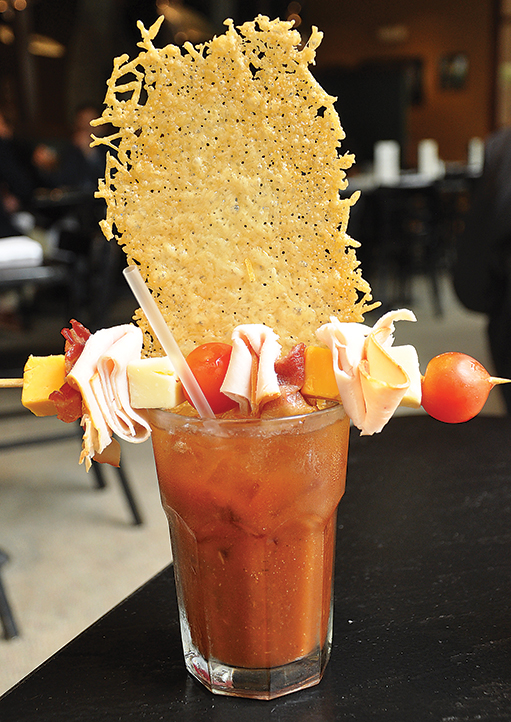 Not that unusual for some of us, but this Louisville sensation brings a new level of tastiness to the idea. The Hot Brown — a turkey, bacon, mornay sauce broiled on Texas toast — is a gastronomical delight that began decades ago at the Brown Hotel in downtown Louisville. There are many, many variations on the theme, but this Hot Brown Bloody still brings tears of joy to the eye. More on these tasty items and other Louisville delights from my travel story in the June 23 issue can be found at epgn.com. 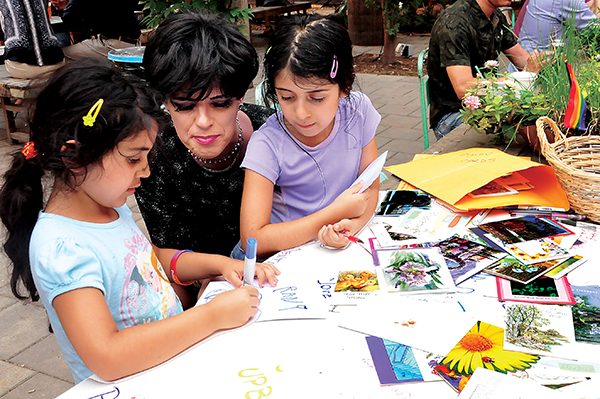 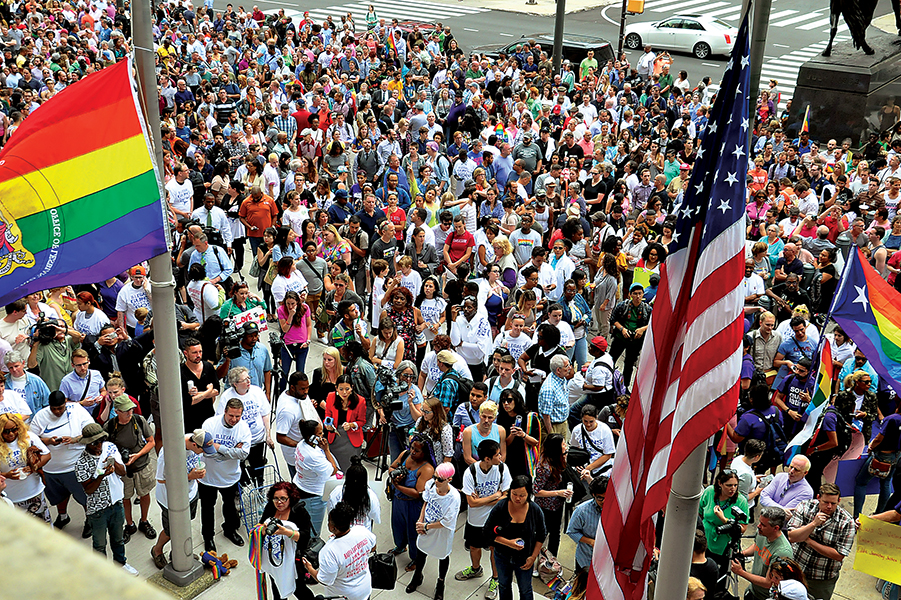 Tragedy marked Pride month in 2016. Hours before the Philadelphia Pride parade and festival, 49 innocents lost their lives in the Pulse nightclub attack in Orlando. In the days and weeks that followed, many responded through fundraisers, support groups and other healing activities, including a get-well-card signing and a vigil of support here at City Hall. Truly the irony of the two Muslim children decorating cards for victims should not be lost on anyone. The vigil brought together more than 2,000 individuals, who spilled over into the street. A Gayborhood-wide fundraiser later raised more than $100,000 for Orlando victims and families.

7. Baseball is so gay 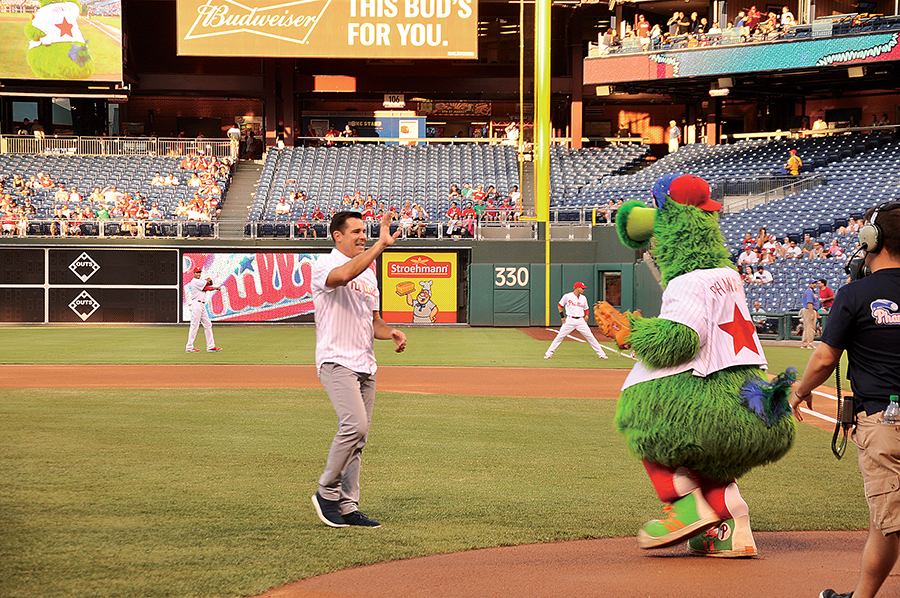 Out, retired baseball player Billy Bean visited Philadelphia this past summer to throw out the ceremonial first pitch at the first official Phillies LGBT Night, after a dozen years as a community-led event. Bean took time to talk to each of us and even suggested some selfies with him. A class act and a great ambassador, Bean is the representative of inclusiveness for Major League Baseball.

8. Colors of the wind 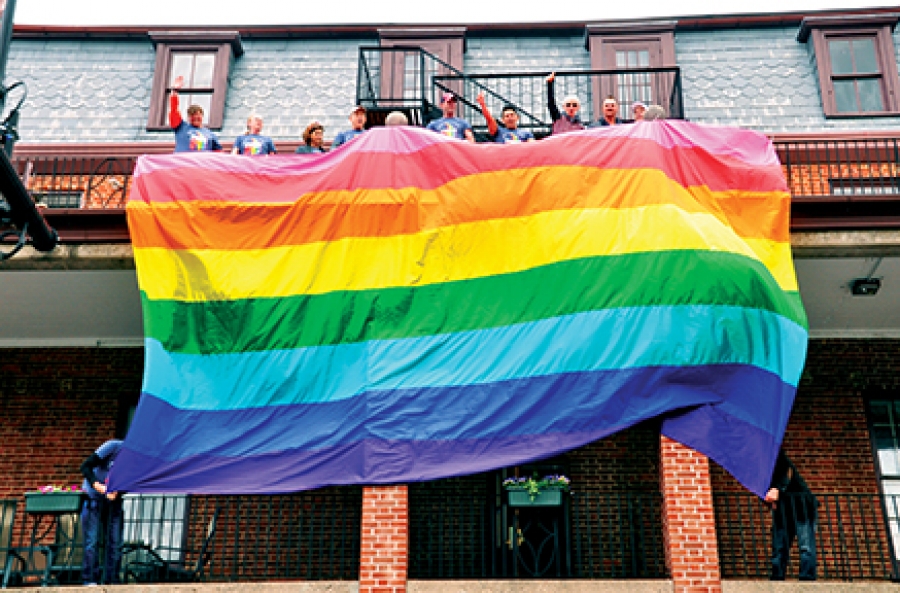 New Hope is one of our favorite LGBT destinations outside of Philadelphia. Proximity aside, there’s also something for everyone in this little town of wine, retail and song (including a high-heel drag race every fall on Mechanic Street!). This year, New Hope Celebrates Pride, along with its pop-up history shop, purchased a new huge rainbow flag to fly during its Pride celebrations in May. The official unveiling was just the needed rainbow to break the gray Saturday-morning sky at the corner of Bridge and Main streets. New Hope Celebrates Pride in 2017 will be May 14-21 with the parade and block party on May 21. 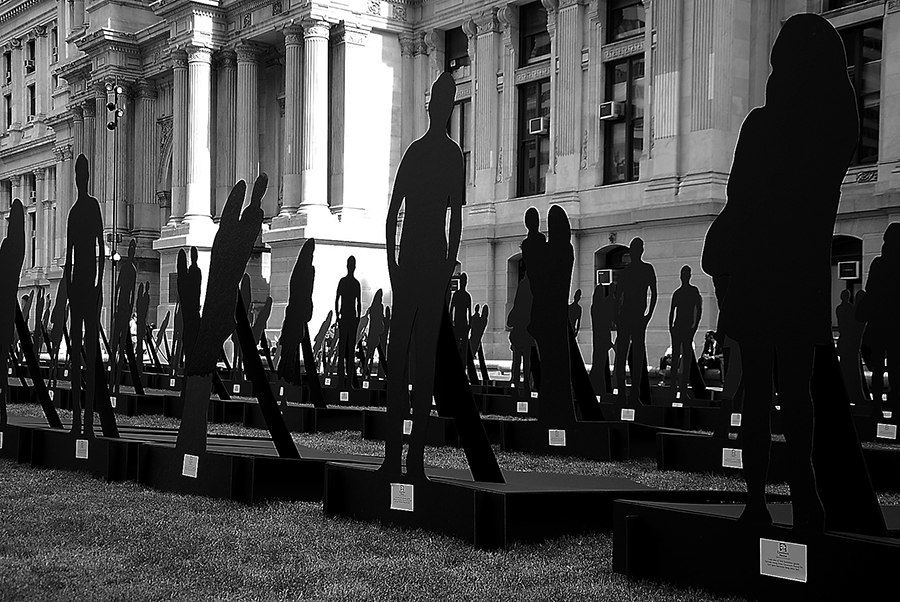 This art installation at City Hall drew some attention to the already-precarious plight of LGBT homeless teens and children across the area. Stark, haunting, lonely, it represented the hundreds, if not thousands, of youth living on their own in the city trying to be productive and make ends meet, sleeping on couches and sharing spaces. One small, bright star in the night is a new LGBT homeless-youth shelter, which will break ground in early 2017 in North Philly and open the following year. 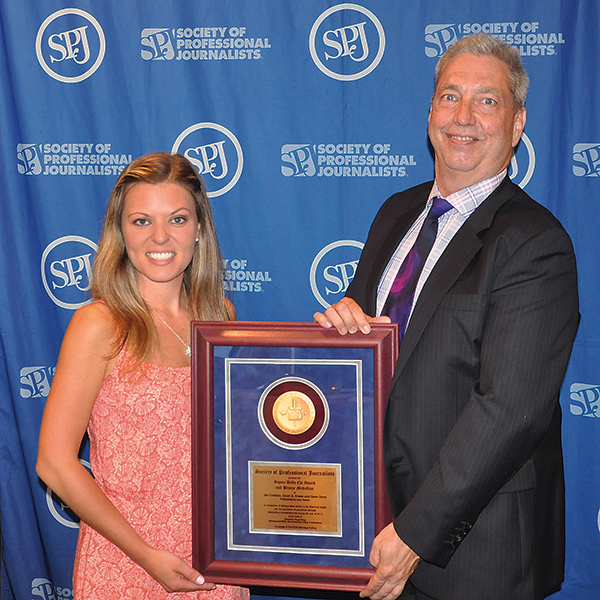 Editor Jen Colletta and I traveled to receive another Sigma Delta Chi award at the National Press Club in Washington, D.C., in June. Our coverage of the U.S. Supreme Court’s marriage-equality decision and related stories garnered the award, which we shared with graphics artist Sean Dorn. Here’s hoping we get to go back this year for our coverage of the DNC!