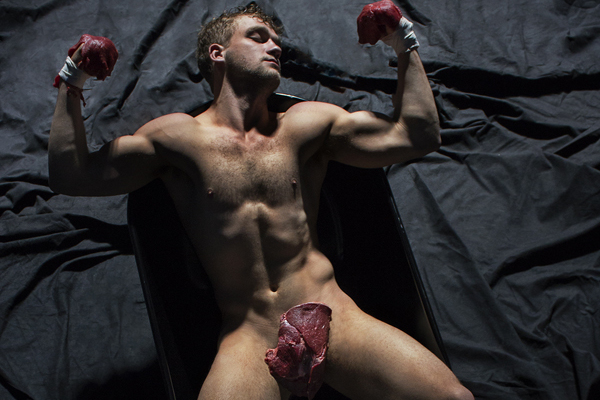 Brian Sanders is referring to certain factions at the Pennsylvania Ballet who may be having second thoughts about commissioning a new piece from one of the city’s premier avant-garde performance artists. After all, the PA Ballet is one of the country’s most prestigious — and traditional — dance organizations. We’re talking about a company whose last performance was “Cinderella” and whose next is “The Nutcracker.”

Sanders is well-known, and highly regarded, as the head of his own dance performance troupe, JUNK, a very popular cornerstone of the annual Fringe Festival. His work is known for its athleticism, its acrobatics, a bizarre sensibility that is both fascinating and endlessly imaginative — and a sensuality that often can be quite breathtaking.

Sanders’ roots in dance and choreography include several years of touring with the famed Momix, as well as performing at the Painted Bride. But what helped develop his outrageous sensibilities as a performance artist was his time spent as what he calls “an avant-garde go-go dancer at Shampoo during the 1990s.” Shampoo, for those too young to remember, was the trendy weekly gay dance party where attendance was de rigeur for the hip crowd whose goal it was to be seen at all the hottest venues.

How did the out avant-garde performance artist/choreographer and former Shampoo go-goer hook up with the uber-traditional Pennsylvania Ballet?

“Simple,” Sanders said. “Angel Corella [the Ballet’s artistic director] saw my piece ‘American Standard’ at the Fringe and approached me.”

Sanders has also worked with PA Ballet dancers in the past on pieces for the “Shut Up and Dance” fundraising series.

The title for the new piece he is creating is “Chicken Bone Brain,” an appropriately Fringe-esque turn of phrase that itself caused a bit of a ripple.

“The title made the Ballet folks nervous, too,” Sanders said. “They kept asking, ‘Are you sure that’s the title you want?’”

Which is not to say that it’s all worry and resistance working with the Ballet. On the contrary, Sanders seems to be having the time of his life. He admits that it’s a bit of an adjustment — himself an avant-garde choreographer given to wild non-linear experimentation, and his group of classically trained dancers used to a much more orderly process.

“We’re sort of meeting in the middle,” he said of the creative process he’s worked out between himself and his dancers. “But I couldn’t be happier with the results we’ve been getting.”

“I had been going through something of a mid-life crisis, and I was finding myself in a dark place. ‘Chicken Bone Brain’ is about my thought processes as I was finding my way to a sense of internal nurturing.”

Knowing that journey will include, among other things, flight harnesses and chicken bones, one suspects that the normal ballet audiences are going to experience something outside their comfort zone.

“I’m hoping that my usual JUNK audience will come, and they and the ballet’s audience will encounter each other and both come away with a whole new experience. That would be great, wouldn’t it?”

Those who have experienced Sanders’ work with JUNK know that frank depictions and examinations of sexuality and gender issues are commonplace in his shows. Is this going to be another aspect of “Chicken Bone Brain” that will shake up the staid ballet crowd?

“Sexuality — not so much,” Sanders conceded. “There’s so much else that I’m shaking up and exploring, with this I’m staying pretty neutral.”

But in no way does Sanders feel he is being compromised making the leap to the so-called “legitimate” stage.

“It’s what I’ve always done. I’m always trying to rethink the box — inside the box.”

The Pennsylvania Ballet will present “Revolution” (which will include the world premiere of “Chicken Bone Brain” by Brian Sanders) Nov. 10-13 at the Merriam Theater, Broad and Spruce streets. For more information, call 215-893-1955 or visit paballet.org.