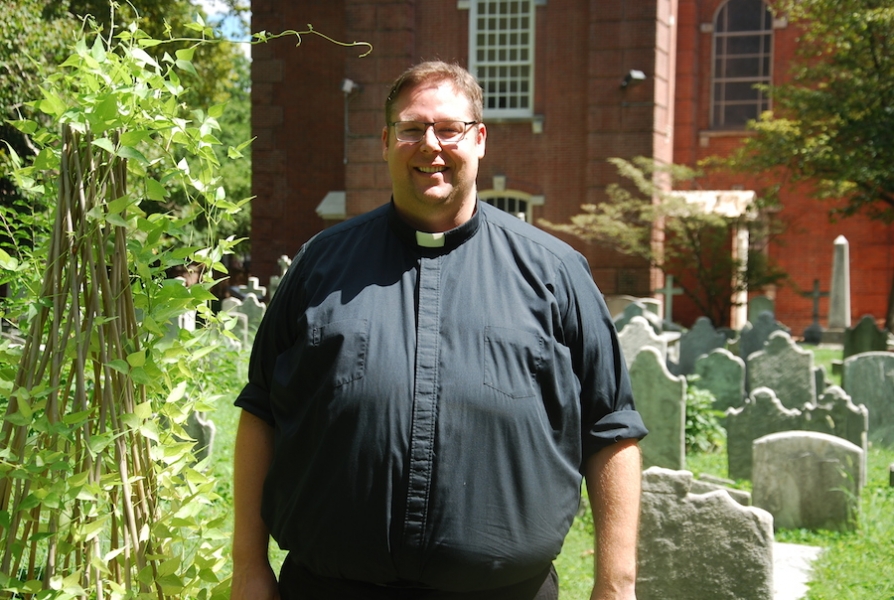 A rainbow sticker is one of the first things to greet congregants and visitors when they pass through the gates at St. Peter’s.

The centuries-old church — it has been in continuous use since its first service in 1761 — prides itself on its storied history, but also its modern-day progressiveness, said associate rector the Rev. Sean Lanigan.

The openly gay clergyman joined the staff at St. Peter’s in the fall of 2015, two years after his ordination. The Wisconsin native earned an undergraduate degree in art history from Brown University and went on to get a master’s of divinity from Yale as well as a diploma of Anglican Studies from the General Theological Seminary. He led a campus and youth ministry in Long Beach, Calif., before moving east for the St. Peter’s post.

“I was excited about this church because it’s such a historic building — it looks like it could be a museum — but it’s such a lively place,” Lanigan said. “It’s full of people who are committed to the city and committed to sharing God’s love with our neighbors. Just the juxtaposition of the history and it being such a relevant, contemporary expression of faith was exciting to me.”

Lanigan, 33, said the congregation is diverse, drawing in residents from the surrounding Society Hill, as well as visitors from other neighborhoods and even New Jersey and Delaware. It has a thriving LGBT population as well, he said.

“Having an openly gay clergy person probably helps,” he laughed, “but St. Peter’s has always been a welcoming place, and we’re growing in that way even more so.”

Lanigan said the congregation and the city have welcomed him heartily, but in his previous position in California, he did face some pushback in the interfaith work he led.

“In California, I faced challenges in terms of credibility,” he said. “There were groups who wouldn’t work with us because we were clearly LGBT-welcoming.”

That has never been an issue for him in the Episcopal Church, he noted. Lanigan was raised Roman Catholic but, after coming out at 16, began exploring other faith communities.

“It was a slow process because in many ways I loved it, but it was obviously not going to be a safe or good place for me to pursue what I felt like was my calling. It was a big struggle,” he said.

In college, he was mentored by a female clergy member who urged him to pursue his passion for theological studies.

“She opened my mind to what was possible. I felt like God was really important to me and I wanted my life to be about something meaningful, and she said, ‘Go to divinity school.’ Usually you’re endorsed by a group that says you’ll be a good priest or that you should go, but I just went myself; my path was unconventional.”

That path took him to the Episcopal Church.

“It was always this sense of wanting to commit my life to something that I felt had a lot of meaning, somewhere where I could be of service to people and ask big questions,” he said about his calling. “Sometimes church doesn’t do a very good job of asking the big questions but I try to. I had a big discussion about atheism with a 10-year-old girl the other day. It was fun.”

Lanigan manages all of the church’s Christian-education programs for adults and children, as well as handles outreach initiatives, such as its weekly food cupboard that feeds 180 families every Saturday. He also oversees the church’s new social-justice taskforce that will be examining education issues and manages St. Peter’s relationship with a church in Guatemala, in addition to his preaching and pastoral-care tasks.

In the long term, he’s hoping to help the church further its work of raising awareness about its mission, and the wider vision of the Episcopal Church.

“The Episcopal Church hasn’t had to do a lot of recruitment, but I think we’re moving into an era where we’re going to be doing more to show the community who we are,” he said. “Especially with younger folks, Christianity can look like a terrible thing; if I were to look at the media, and I hadn’t been raised with a good experience, I’d be like, ‘I don’t want anything to do with that.’ There are portions of Christianity that are hateful and that LGBT people would not want to be a part of, but there are many communities that are as welcoming as ours and that’s something a lot of people don’t know.”

Apart from supporting formal awareness-building initiatives, Lanigan said he tries to communicate the message of the Episcopal Church and St. Peter’s through his daily interactions.

“We try to just be people of love in our daily lives — our jobs, our neighborhoods, our communities. We’re not a hard-sell church; we just want to live our lives in ways that make people curious about the hope and the faith that we have in us.”