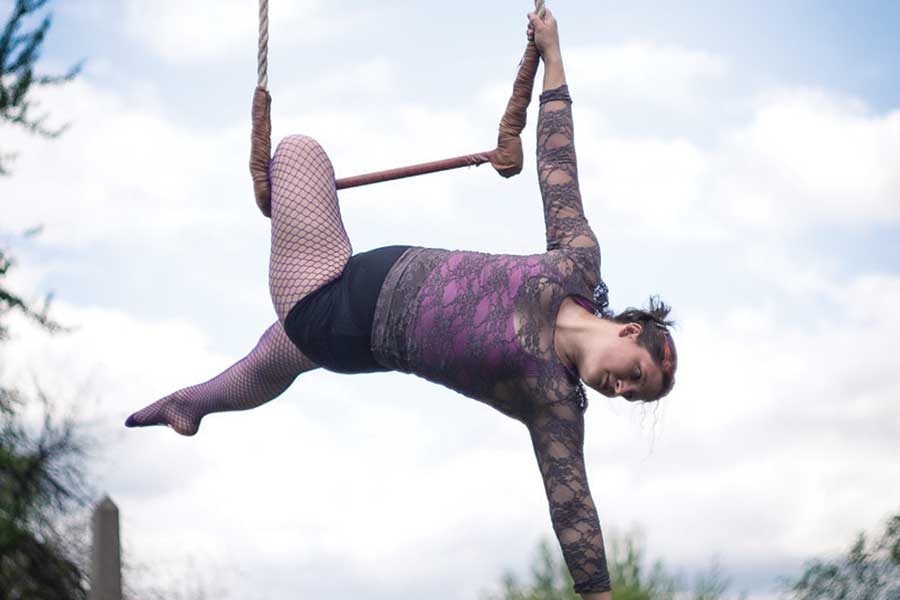 A troupe of circus performers lumbered for a half-hour to raise four airplane-grade aluminum rods into the air, 20 feet above the lawn of a historic cemetery in West Philadelphia.

It was a surprisingly sunny Saturday at the end of April as Tangle Movement Arts prepared for its hour-long performance at the Go West! Craft Fest at The Woodlands.

The seven who set up the freestanding aerial rig began speaking in calculations to make sure there would be enough “hang space” for the performers.

“Probably hanging on it will give us that extra inch by the end of the day,” said Lauren Rile Smith as she pulled on the trapeze. Also hanging from the rig were a rope, silks and lyra, commonly known as an aerial hoop.

Rile Smith started Tangle as a queer feminist circus five years ago. She and her wife run the troupe, which includes 13 people. Guest artists frequently participate. They have two performances a year, with the next one slated for September, plus several pop-up “tinycircus” shows like the one at The Woodlands.

“Circus uses strength that isn’t typically associated with female performance like pull-ups and lifting others’ body weight,” Rile Smith said. “Before circus, I was a poet. I realized that the highly physical medium of circus had a similar tension between spectacle and narrative.”

She added the group’s outdoor performances are eclectic family-friendly showcases, while the indoor shows typically have more of a narrative, focusing on female relationships.

“You can see a lot of queer circus artists performing heterosexual roles,” Rile Smith said. “There is value in those stories, but it’s great to have more than one. These diverse types of relationships and different icons of female strength become the muses that always get us going.”

Dampier lifted his fiancé, Grosjean, onto his shoulders the morning of the show. She untwisted the purple silks after the rig went up. Then he picked twigs out of the grass, so the performers wouldn’t have to worry about injuring their bare feet. The couple was the first to hit the rig to practice a duet on the rope.

He said it doesn’t matter what gender you are in circus, adding anyone will be respected for taking on the tough practice. Grosjean said she liked the medium because she could see how much stronger it made her. Despite some bruises, she also built muscle.

“Tangle creates space to showcase all bodies,” said Benamy, who identifies as queer. “My body isn’t necessarily the most lithe. Being able to see people with a variety of bodies performing is nice.”

Her tinycircus performance was a tribute to Prince. She wore a purple bow tie, leggings and glasses.

When Benamy started with circus in 2011, she said she couldn’t climb the rope. But she soon moved to the hoop and became a regular on the trapeze with Tangle. Benamy said she got into circus after she went to a show and a performer offered some advice.

“He said the secret was just to go and practice and do it,” she said. “There was nothing separating me from them except for hours of practice.”

That held true for those performing with Tangle at the craft fair. Many had analytical day jobs as pharmacists or research professors. They’ve taken to circus as a different outlet, ranging from creative to physical.

“I don’t have any dance or art background,” said Campbell, a pharmacist. She added it was a spur-of-the-moment decision to sign up for her first class at the Philadelphia School of Circus Arts. “But this group is so supportive. I’m training about four days a week now.”

Schlegel liked the fact that the form offered the support of a team and the ability to stand out individually during a performance.

“Circus is very community-oriented,” she said. “You have a whole support structure.”