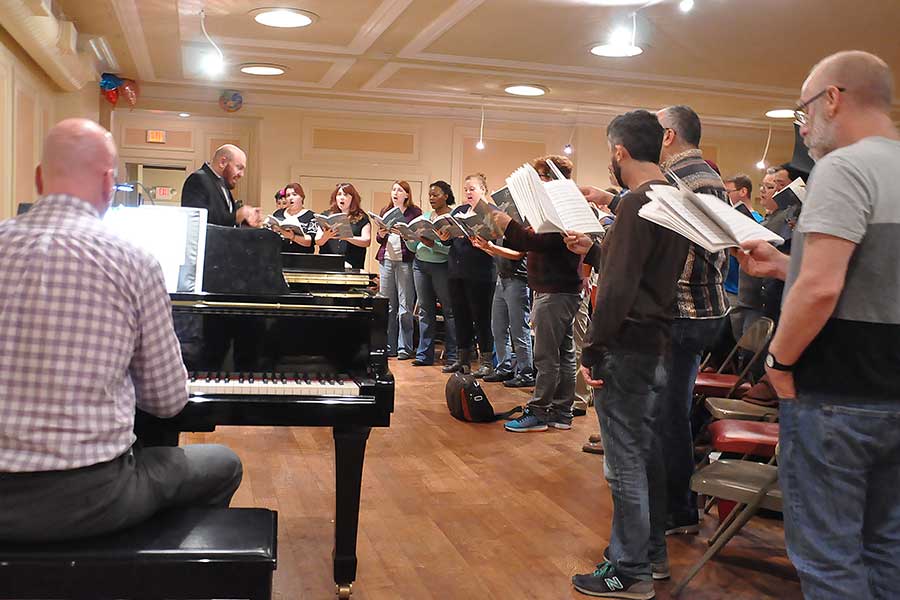 Kirsten Schaney grew up in a tiny town in Western Pennsylvania where she felt it wasn’t OK to be gay. About a decade ago, she moved to Philadelphia to join her partner, and one of the first things they did was go to Pride in the Gayborhood.

“There were people yelling and screaming, ‘Come and sing with us,’” Schaney said. “Singing is a huge part of who I am.”

Those calling to them were members of Philadelphia Voices of Pride, recently rebranded from the Spruce Street Singers. The formerly gay men’s group had begun accepting lesbians, trans people and allies.

“For me, it’s always been really important to be identified in a gay and lesbian group,” said Schaney, now president of the chorus. “It was kind of my first experience putting it in people’s faces, like, ‘Hey, I’m gay.’”

The chorus that helped Schaney come out is celebrating its own milestone: its 10th anniversary. To mark the occasion, the 55-member chorus will perform “The Armed Man: A Mass for Peace” by Karl Jenkins, a contemporary composer born in Wales. The Prometheus Chamber Orchestra will accompany them, a first-time collaboration.

The event takes place 8 p.m. May 21 at the Philadelphia Episcopal Cathedral, 3723 Chestnut St. Philadelphia Voices of Pride has not previously performed here. Tickets cost $25 for general admission or $40 for VIP. Students with their IDs pay $10 for entrance.

“It’s very exciting for us to be performing new music of a composer who’s still living,” said Dan Schwartz, artistic director of the chorus. “Certainly, there’s still a lot of violence against our community. Singing a mass about peace and the juxtaposition of violence is certainly relevant for us.”

Schwartz said he would like PVOP to expand people’s horizons in terms of what they look for in an LGBT chorus. Many gay singing groups focus on pop music, while PVOP takes on more classical work.

“You’re probably going to think I’m joking, but we’ve had people tell us they’ve cried during our shows,” said Yvette Wilson, a soprano singer in the chorus. “To go from where we were 10 years ago to where we are now and say we brought someone to tears with our sound, I think that’s truly amazing.”

Wilson said, when she joined in 2007, there were some members who had trouble singing or were singing in the wrong range. But now people’s voices have developed and the arrangements have matured.

“I think we’ve more than made a name for ourselves in this community,” she said.

Schaney added that PVOP is proud to join the standard bearers for local LGBT choruses: the Philadelphia Gay Men’s Chorus, which has been around for more than 30 years, and Anna Crusis Women’s Choir, which is over 40 years old.

“Our name used to never come into that mix,” she said. “It’s great to have become included in the group of names that are known in the city.”

In addition to the musical achievements, Wilson said she’s happy to see the choir members support each other personally.

She noted she was raised in a black Baptist family, but when she came out to her mother, it wasn’t a big deal.

“I know that’s not the story for everyone,” Wilson said. “What I really love about the chorus is it’s not just a chorus. It’s a family.”

“We want to keep going,” she said. “I’d like to see us do more outreach with schools and to people who don’t feel at home yet in the Philadelphia area. It’s hard to find your place in a city this big. I hope we can continue to stay that home for a lot of people.”

For more information or tickets to the anniversary concert, visit www.pvop.org.