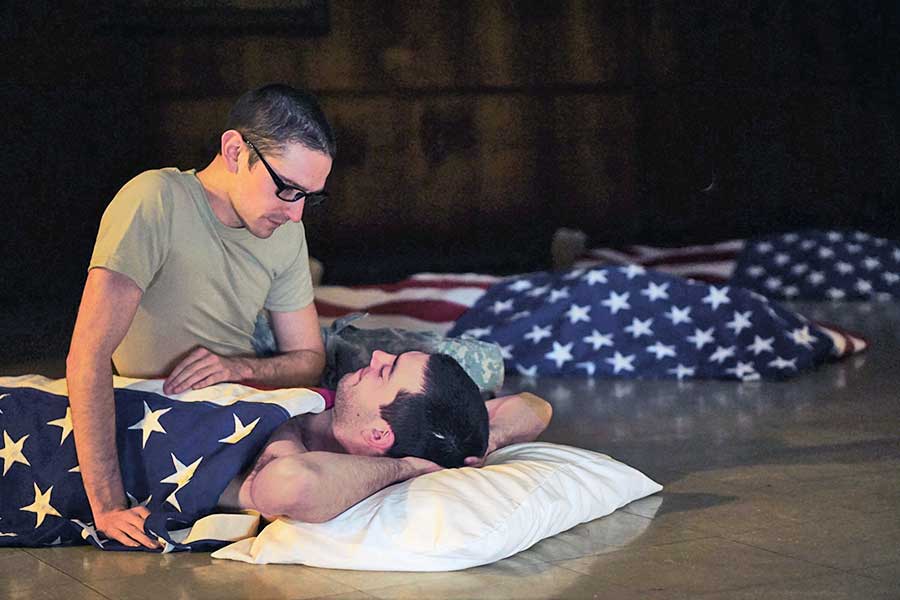 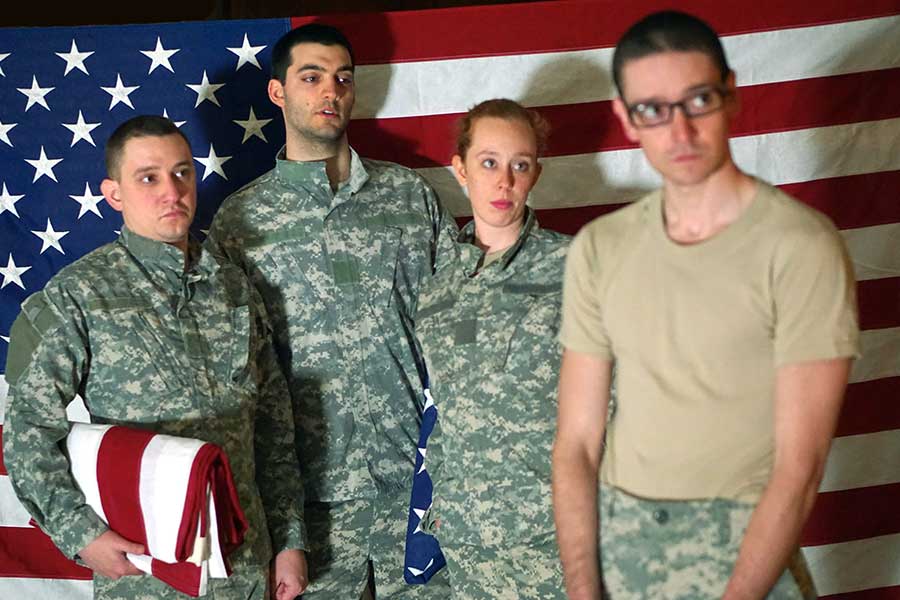 A new play takes audiences inside the mind and life of a controversial modern-day figure when Inis Nua Theatre Company presents the American premiere of “The Radicalisation of Bradley Manning,” through May 15.

Written by Tim Price, this Welsh play tells the story of the young Army intelligence analyst who leaked the largest amount of classified documents in U.S. history. Chelsea Manning, who in 2010 was known to the world as Pfc. Bradley Manning, downloaded and shared with WikiLeaks more than 700,000 government files on Guantanamo Bay, Cuba and the wars in Iraq and Afghanistan. Some of the videos showed airstrikes where U.S. forces opened fire on groups of individuals believed to be insurgents. Ultimately, the dead were found to have included children and journalists. Manning was arrested and held in solitary confinement for three years before being sentenced to 35 years in military prison in 2013. She is eligible for parole in 2020.

Director Tom Reing said the play is a fictionalized biography written while Manning was awaiting trial.

“The playwright, Tim Price, did his homework,” he said about how close to the real story the play is. “The play was written at a time when Manning was on trial, before the announcement that she wanted to be referred to as Chelsea. That hadn’t been said but it was kind of in the play already. So I don’t know where he got his info from. But it does have this character that looks like they are in transition at times. Both the writing and way we’re producing the play is very stylized and ensemble-driven. It’s almost heightened realism and that means all the emotions go to the extreme. But we feel like that’s the best way to tell the story in an interesting and engaging way.”

Reing added that the play takes the position that Manning may have had a problem following orders, but her actions ignited a firestorm of important and challenging questions.

“The play and my viewpoint is that Chelsea is wrongly imprisoned and was a whistleblower,” he said. “We as citizens need to know about these things that are done in our name. I hope that Chelsea will be granted clemency when [President] Obama goes out of office. I think Chelsea feels that she was dealt a bad hand in a number of ways.”

Reing explained some of the obstacles Manning faced in her early years: Her father bullied and then left her and her mother. Her mother took her to Wales for her teenage years and, without financial support for post-secondary education, she enlisted in the Army — at just 5-foot-2 and 105 pounds.

“The deck was stacked against her,” Reing said. “She was constantly being picked on and bullied for who she was, and while this was going on she had the struggle with her identity that finally came to form after her sentencing. What we learn about her character is she occasionally lashes out but the lashing out is ineffective. Her downloading of Army information to WikiLeaks is impulsive but I think it was her first deliberate effective attack, as it were. She saw something that she felt was wrong and thought people needed to know. So she did it.”

Reing surmised that Manning may not have predicted the consequences that came from that action.

“I think she may have thought that she would expose it and no real consequence would come from it. She was already going to get an unfavorable discharge at this point. But I don’t think she knew she could be imprisoned for 35 years when she did what she did. But now that she is, she has taken on this mantle of being someone who is one for human rights and the knowledge of what your government does, as well as the rights for transgender people.”

Reing added that Manning’s struggles with her identity and acceptance weren’t the reason for her actions, but they were somewhat of a catalyst.

“A person that is struggling with who they are, that comes to a point where it is an added tension to their life,” he said. “So I think she felt even more oppressed and abused and picked on.”

Reing said Manning is still facing abuse in the military prison system because of her transgender status.

“For Chelsea’s purposes, she’s still being held in a male prison,” he said. “She’s not allowed to have any surgery for transitioning. She can take hormones for it but she’s not allowed a total transition. She also still has to maintain a male haircut. I think the games that the Army plays are a way to frustrate and humiliate a person that they see as an enemy.”

Reing said that Manning is not involved with the writing or production of this play but that she does know her story is being told on stage.

“She is aware of it,” he said. “The playwright, Tim Price, has also said her legal team is aware of it. In fact, we’ve been Tweeting about the play and they’ve been picked up by Free Chelsea Manning organizations.”

Reing knows that most people will already have strong opinions about Manning and her actions going into the play, one way or another, but said he hopes the show will keep her story fresh in people’s mind — especially as most tend to forget important issues as soon as something else occupies their attention.

“They should take the knowledge of what happened,” Reing said about what he hopes audiences take away from seeing the play. “Americans have a short memory and we’ve already moved on, and yet Chelsea is still in prison and won’t get paroled for another seven years and, conceivably, she could serve out the whole 35 years. I think people should be aware of what she did and examine it and see if they feel if it was just, which I don’t think it was.”

Reing added that other countries are far more supportive of Manning and her story.

“I don’t want her to go away,” he said. “There’s a bigger push in Wales to take ownership of her. The school that she went to constantly has choir recital benefits for her defense fund. There are organizations in America that are like that but it took a Welsh playwright to tell her story. That’s something to me that more people should know about. She writes for The Guardian as a columnist. She doesn’t write for an American newspaper. That’s an example of another culture essentially adopting and supporting her, but in America it is not that strong and I want to see that change.”

Inis Nua Theatre Company presents “The Radicalisation of Bradley Manning” through May 15 at The Proscenium Theatre at Drake, 203 S. Hicks St. For more information or tickets, call 215-454-9776 or visit www.inisnuatheatre.org.