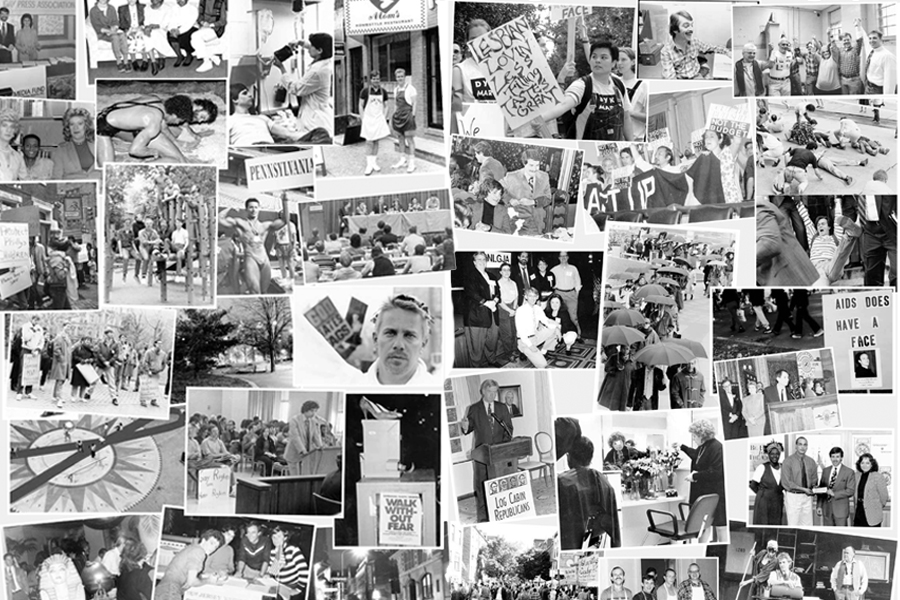 If ever there was a daunting task lurking along the back walls of the PGN office, this was the year it materialized. Six huge drawers containing tens of thousands of photos from across the decades reside just behind my desk. Many of the pictures saw publication and then were filed away, never to see the light of day again.

I cannot honestly say I looked at every single photo, but I did look at thousands more than I thought I ever would. Partly because I kept finding gems and curiosities along the way, but also there were many, many questions that came up as I went along. Questions like, Who are these people? Where was this? Whatever happened to so-and-so?

As one might predict, some of the largest photo collections are of protestors, politicians and Pride. The early years of fighting to be recognized followed by the AIDS crisis brought most of the civil disobedience in our community. Since then, we’ve added marriage equality and the push for nondiscrimination and hate-crimes laws. Those are powerful images and of course that made them attractive to shoot and publish. A lot were from the Associated Press and frequently were of protests in New York City or Washington, D.C.

Until I started shooting for the paper in 2008, there were many weeks when the photographs were all by AP. Sometimes there was a lone picture of a Philadelphia councilman, bar owner, nonprofit leader or activist. Part of my photographic legacy has been to make the paper as inclusive as possible by attending an event and sharing with the entire community what’s happening.

The Pride parade, OutFest and Pridefest America (precursor to Equality Forum) all have multiple-year folders to a point. Sadly, many of the folders have only a few photos in them, underrepresenting the celebrations — something that’s changed in the past decade, I’m happy to say. There are folders in abundance covering theater, film and television, however. If there was a queer character, actor, writer, theme or suggestion of one, PGN ran a photo.

Interestingly, as I flipped through the back issues while working on the 40 Years/40 Stories piece, I found hundreds of pictures from bars, parties and bathhouses that only exist on those pages. Sometimes there would be more than a page full of shirtless mustached men, drinkers and dancers. Think about it: At one time, it was only at gay bars that people scared for their lives and livelihoods would be seen cavorting with their own kind.

There are folders galore with a single image of a person and the only identity clue is the name on the tab. There are entertainers and bands that I’ve never heard of and can’t even Google any information on. Sometimes I would think of a person or party or bar and find we have absolutely nothing at all on them. I did, however, find a photo from the first Dyke March.

The photos on these two pages are of a wide variety of years, places, events and people. You’ve also seen photos in some of the other stories this week. There are more in sports and in a special anniversary edition of Scene in Philly, where you can see familiar faces in their younger days — some of whom you can attach to names you know, like William Way and faces from bars of yesteryear like Gatsby’s, Key West and Raffles, to name a few. While the task has been daunting, time-consuming and painful (hunching over drawers and sitting on the floor, for two reasons), it has also been fascinating. The process for this issue is over.

But the photo journey has just begun.