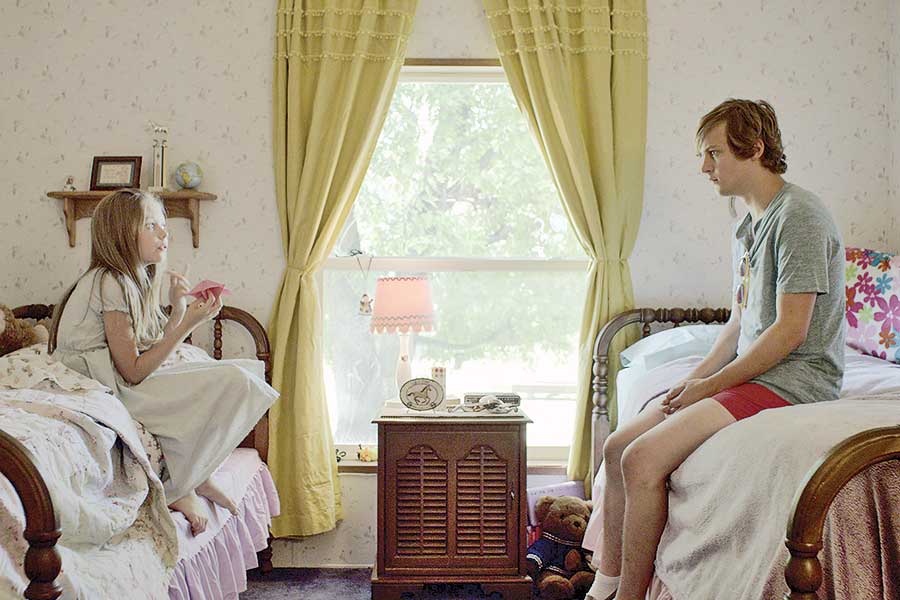 “Take Me to the River,” opening April 1 at Ritz at the Bourse, is straight writer/director Matt Sobel’s auspicious debut feature about California teen Ryder’s (Logan Miller) awkward family reunion in Nebraska. Ryder wants to announce he is gay to his extended family, but his parents, Cindy (Robin Weigert) and Don (Richard Schiff), express their concerns. They think it’s best for Ryder not to out himself to the conservative family members on the farm. Nevertheless, family tensions escalate when an unseen incident involving Ryder and his pre-teen cousin Molly (Ursula Parker) rile his uncle, Keith (Josh Hamilton).

Sobel based the film on his experiences “going to a version of that family reunion for the past 20-some years of my life,” he said in a recent phone interview. “There is a lot of myself as a 17-year-old in Ryder. I was very overly vocal and confident — and I was confident that I always held the higher ground in arguments. When I would visit my more conservative family, I was an open-minded West Coast liberal going to a more narrow-minded, bigoted place. As I became an adult, I got a more nuanced understanding of that situation.”

“Take Me to the River” was made at a farmhouse where the filmmaker’s mother grew up and his grandmother lived until recently. While Sobel confides, “None of the drama was real, nor were the characters based on real people,” he wanted to depict the nightmare that Ryder experiences, “being accused of something inappropriate.” As such, this compelling drama stems from Sobel’s desire “to capture the feeling of anxiety and being unable to exonerate myself.”

The film’s spell is cast as Sobel deliberately sets up the story as a possible coming-out drama, but then turns it into something different. He observed, “Ryder is more interested in speaking about his sexuality than living it. The film is more about him being on the precipice of not knowing nearly as much as he thought about himself and the world, rather than asserting his identity on the family. He is begrudgingly agreeing not to come out, but every point he gets the opportunity to do so, he backs away from it. Those situations articulate how insecure he is under the veneer of his loudmouth liberal attitude.”

In talking with the actors about Ryder’s character, Sobel discussed such things as: How did Cindy react to her son’s coming out? How does she really feel about it? And, is she adjusting her stance slightly returning home to it, to keep the other family members comfortable?

The gulf between how characters appear in the film and the reality of their situation is what makes “Take Me to the River” percolate. Much of the film’s tension comes from the awkward silences that exist among the characters. A scene where Ryder visits his uncle Keith’s house for lunch is particularly uncomfortable. The writer/director worked with his editor to “cut the air out of each moment” to increase the uneasiness between the characters. One example of this is when his uncle’s family responds to a song they ask Ryder to sing by changing the topic of conversation, thereby avoiding any response to his performance. A latter scene of Ryder and Molly sitting in her bedroom in silence is equally discomfiting because of the tension between the characters.

Sobel also employs a visual strategy to keep viewers on edge as Ryder’s situation gets stranger.

“It’s almost surreal, but a more accurate word is ‘uncanny,’” the filmmaker explained. “The goal was to create a very strong and increasingly stronger dissonance between the way the film looked and the way it felt. Uncanny is familiar, but strange at the same time. This makes us uncomfortable because we’re not sure how to respond to it. It starts naturalistic and as we get more insidious and darker, it becomes more like a children’s coloring book: The color gets more primary, subtly so. By the time we get to the river, which is bucolic and pastoral and pleasant-looking, the tone is ambiguous and dark.”

Ultimately, Sobel wanted to create a kind of parable with his film.

“The feeling I had writing the story was that it was kind of like a fable. The sparseness of the location — and that we don’t go back to any one of the places again —makes it picaresque and episodic. There is something about the river in the title and mentioned in the film, but we don’t see it until the end. It was a ring of fire he has to walk through before he finished his journey.”

“Take Me to the River” is a journey worth taking.