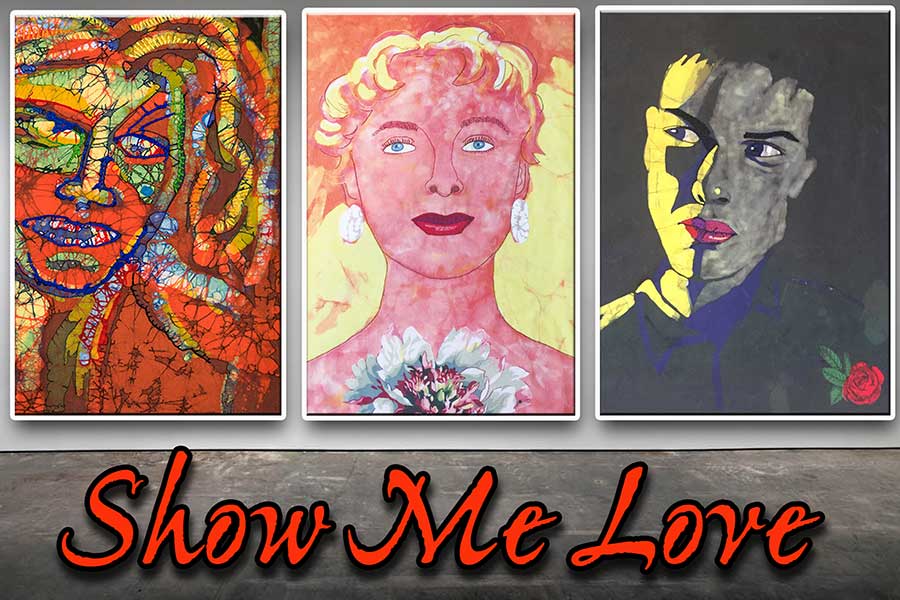 Philadelphia artist Carolyn Cohen is focusing on the stories of community activists in her latest exhibition, “Allowed to Love: Heroes and Martyrs in the LGBTQ Community,” which will be on view at Muse Gallery April 1-30.

“There are so many people all over the world who are not allowed to love the way they want or the person they want,” she said. “They have to keep it hidden. Even in our country, people feel like they have to keep [their sexuality] hidden from their families or their friends. They may face discrimination or brutality walking down the streets.”

Cohen is known for her textiles and paintings incorporating themes of social justice.

This new series of portraits features images of activists, artists, victims and others within the LGBTQ community, and includes images of Christine Jorgensen, Harvey Milk and RuPaul, among others.

“I started with a list of about 100 names of different people,” Cohen said about how she chose the subject for the exhibition. “Not just activists, but artists, writers and other people who have faced discrimination or have been murdered or committed suicide. From that list, I whittled it down, looking at their life stories, their image and trying to determine if I felt I could do justice to their image aesthetically and artistically, and whether I thought they had a compelling story as well.”

Each image in the exhibition will be accompanied by text describing the individuals portrayed and their accomplishments and challenges.

Cohen said she didn’t always include stories with her art, but it became necessary when her work began incorporating more activist themes.

“It was about two-and-a-half years ago that I became interested in creating art with a social-justice component,” she said. “At that time, that was when I decided it was important to incorporate text as part of the overall exhibition. I’m doing that again in this exhibition because people coming in off the street might not know any of these people. They may not know anyone at all who is LGBTQ. The stories are really compelling.”

Cohen said many of the stories and activists featured in the exhibition are from the transgender community.

“Last year a young transgender woman, Leelah Alcorn, committed suicide,” Cohen said. “She was all over Facebook because she was a pretty woman and the suicide note that she left was so compelling as well. I picked the image that had been all over Facebook to use because I thought that was an image that people would recognize, which is what I wanted, and it went along with her story.”

The exhibition will also feature activist Myles Geiger, a local transgender entrepreneur and businessman who will be speaking about trans issues at an April 10 artist reception.

“Initially I had been thinking about doing an exhibition about transgender issues. I met him in the course of looking into that and we talked about doing something together and ultimately decided not to,” Cohen said. “I decided to pursue this exhibition that is a little bit more broad in scope. We had stayed connected and he’s very interested in being a part of this and getting his story out there and mentoring young people who may be questioning their sexuality and gender, and letting people know that it is OK and that he is a success story. One of the things that struck me as I was researching my last show, which was about social-justice issues, were the statistics regarding transgender individuals: 41 percent of all transgender people in America will attempt suicide at some point in their lives. It was statistics like that that sparked my concern and interest in doing this show.”

In preparing for the show, Cohen said she was surprised that many people don’t have even the most basic knowledge about LGBTQ activists.

“I thought that everybody would know certain names like Harvey Milk,” she said. “Take RuPaul for example. I just assumed everyone would know who these people are. It was amazing how many people I talked to who had no idea who they were. There are a lot of activists that I can understand that are maybe working in other countries or behind the scenes that people wouldn’t know about. But these big names, I just assumed everyone would know who they were and it surprised me how few people did.”

Cohen said the exhibition is timely given the politically charged climate in this country, where marriage-equality victories and the pending presidential election have pushed broader LGBT issues into the background.

Cohen noted that LGBT people continue to face daily challenges, an idea she’s hoping to expose in her exhibition.

“Shortly after I started preparing this exhibition, there was that horrible attack on a gay couple in Center City,” she said. “It just struck me at the time that we feel like we’ve come some far because we’ve gained marriage equality but yet there are still so many people against us and who don’t see the world the way that we do. So that was one reason that I became more determined to do this exhibition. A lot of people who come to the galleries in Old City, they are just coming in off the street, and I think it’s important to get these stories out there.”