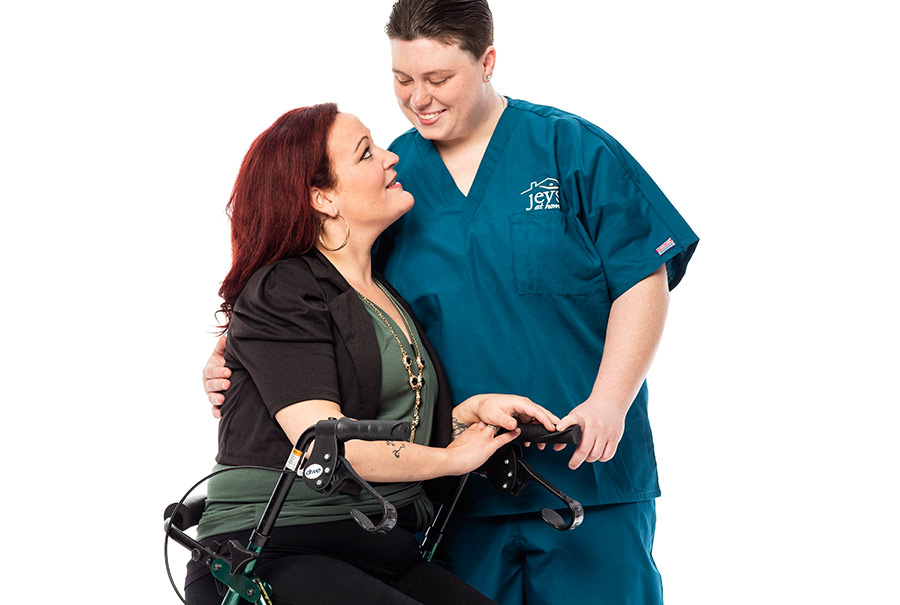 “I’ll never let her give up. Because I’m not a person to give up. And neither is she.”

Brittany Haniebnik and Stephanie Hotchkiss credit one another with helping them overcome the challenges of their past — and the struggles they now face each day.

Hotchkiss, 28, is facing a medical condition presumed to be multiple sclerosis: She has all the symptoms of the chronic, debilitating illness but has yet to receive an official MS diagnosis.

“I have the ‘white matter’ on my brain, neck and back, but it’s not lighting up when they do MRIs so, because they’re not technically active, they won’t diagnose it as MS,” Hotchkiss explained.

But that doesn’t mean Hotchkiss doesn’t suffer the day-to-day symptoms of the disease.

She started noticing gradual health changes several years ago. Overweight at the time, she underwent gastric-bypass surgery in 2012 as a means to preserve her health but, after the procedure, her symptoms rapidly spiraled.

Hotchkiss’ condition has progressed to the point that she now relies on a walker for mobility.

“This is how I walk,” she said, patting the walker. “I don’t like it but I can’t walk without it. It takes me 45 minutes to stand up in the morning because my legs are shaking so bad. I have spasms in my sleep, where I’m kicking, punching, swinging. I don’t even feed myself half the time now because my hands shake too bad. I have trouble signing my signature so now I just do initials. My body just does what it wants.”

The physical and mental toll of the disease, Hotchkiss said, would be impossible to confront without the support of Haniebnik — who is practiced at overcoming hardships.

‘She kept me safe’

Haniebnik, 26, hails from Kensington and admittedly had a tough childhood.

She was molested by family members as a child and entered the child-welfare system at age 13. She spent years in and out of group homes, and eventually in a lockdown facility in Pittsburgh after behavior issues.

“I was on my own, living from house to house from the time I was 13,” Haniebnik said from the Mayfair home she shares with Hotchkiss. “I guess I’ve been on my own the majority of my life, my whole life really.”

About eight years ago, she encountered Hotchkiss through a mutual friend.

At the time, Hotchkiss was in a relationship with a man who was abusive and Haniebnik intervened during a violent incident.

“He was trying to steal my car and she saw it and walked up,” Hotchkiss said. “She and my friend stayed at my house all night to make sure nothing happened, and we stayed up all night talking. I don’t think we’ve spent a day apart since.”

Hotchkiss and her then-boyfriend broke up but were still living in the same house, so Haniebnik moved in.

“She kept me safe,” Hotchkiss said.

They became official about a year after their first meeting.

In the coming years, they would help one another heal from the hurt they both experienced in their pasts.

“She made me as a person get back to being me,” Hotchkiss said about Haniebnik. “Being abused and having the upbringing I had — my family was neglectful for periods of time — I looked at life in a negative way, but she showed me the positive. She showed me that the love I was looking for, I was looking for it in all the wrong places. She made me realize I could be worth being appreciated.”

“She helped me overcome my fears of moving on, of living my life,” Haniebnik added. “I hated people in general. I was into drugs. And she helped me change it all around. The day I met her, I saw her smile, and my whole life just flashed before my eyes. I’ve accomplished so much with her than I would ever believe I could. I mean, look at where I’m at today: I have a beautiful partner, a beautiful home, a beautiful car and a great job. That’s beautiful to me.”

The job Haniebnik now holds is that of caregiver for Hotchkiss, through a program at JEVS at Home, which provides non-medical home-health care for seniors and people with disabilities throughout the Philadelphia region.

As Hotchkiss’ health began deteriorating, so did the couple’s financial situation.

“We were on the verge of losing everything,” Hotchkiss said. “I couldn’t work and when I did apply to places and walked in with the limp, they were like, ‘This isn’t going to happen for you.’ And then Brittany kept losing jobs because she’d have to call out or come home early to take care of me. I hemorrhaged for 52 days and she had to leave work to be with me and she got fired for that.”

A friend suggested JAH to the couple. Through a state waiver program, the organization provides free home care to clients who meet certain requirements, such as a gross monthly income of less than $2,199 and less than $8,000 in assets, which can exclude one home and one vehicle. Once that threshold is met, a client needs to be approved by County Assistance and by a medical provider who attests that the client has an ongoing medical condition lasting more than 180 days. He or she would then be assigned to a service-coordination agency, which would connect the client to services such as JAH’s home-care program.

Once in the program, the client would select a caregiver, who would be paid through JAH based on a set number of caregiving hours. The caregiver can be a family member but cannot be a legal spouse.

However, Hotchkiss and Haniebnik are not married; they celebrated their relationship with a wedding-like event — complete with a photographer, caterer and Hotchkiss in a white dress and Haniebnik in a tux — but said they’ve resisted the legal paperwork.

“It was a fun party but we don’t need any paperwork to know we love each other and we’re going to spend our lives together,” Hotchkiss said.

Because she’s able to serve as caregiver, Haniebnik can receive income for the work she was already doing — everything from laundry and cooking to helping Hotchkiss with bathing, eating and medication.

“I’m 28 and I should be able to bathe myself, go to the bathroom myself — I have to catheterize every four hours,” Hotchkiss said. “There’s so much that has to be done in one day, it literally makes me sick. I don’t even know how to begin to understand half the things that are happening to me, and how fast they’re happening: I’m going from one day I’m peeing normal to the next day I have no feeling and I’m cathing, and then I’m getting boxes of medical supplies, diapers, bed pads shipped. It’s like, it just keeps coming.”

As Hotchkiss struggles with the disease, Haniebnik said she also experiences it in a different way.

“I love her to no end, so to watch someone you love go through this everyday struggle is very difficult. It helps to know I can stand by her side and help her go through it, not just as her lover but as her caretaker,” she said, pausing to check on Hotchkiss as she stretched her leg. “But I have to maintain my composure and my strength to help her carry on with her life. I can’t be down because she’s having a bad day. I can’t be negative. I have to say, ‘This is one step we have to overcome, let’s look on to the next step.’ That’s what I tell her every day: ‘This is one hump and we’ll get over it. We have many more mountains to climb.’”

Even with the positive encouragement, Hotchkiss said she does occasionally find herself being dragged down by the stress of the situation.

“A couple weeks ago, I just lost myself. I didn’t want to do it anymore. I’m 28 years old, sitting in the house all day,” she said. “But Brittany brought me back. She was like, ‘Don’t give up, you keep pushing.’ She brings the positive out of all of this negative.”

The support of JAH is also integral to the couple moving forward, they said.

“I’m like her biggest stalker,” Hotchkiss laughed. “I call her all the time. Any time we run into a question, I’m just like, ‘Ellen will know.’”

Shimberg monitors Hotchkiss’ care, ensures she has the necessary medical equipment and advocates for approval of more care hours if need be. Haniebnik was recently approved for an increase in hours.

Haniebnik said the relationship they’ve developed with Shimberg has helped them keep their spirits up.

“She took an interest in us. She didn’t just come here and do her job; she took her time, talked to us and made us feel comfortable.”

As a way to give back to the organization, the couple joined its advisory board, which is comprised of caregivers and staff. The board explores issues impacting clients and advocates for state-level changes to address those needs.

The youth the couple brings to the board is also important, Shimberg said; many young people who become disabled are unaware that programs like JEVS at Home exist, she noted.

Being a strong advocate for yourself or your partner is necessary to combat the many levels of bureaucratic red tape that surround service programs, she added.

“You have to be a fighter. The system is almost designed to be complicated so people will get frustrated and just give up and deal with it themselves or pay for care out of pocket. You have to tell yourself you’re worth it, your partner’s worth it. It’s empowering to advocate; I’m sure it would be easy for Steph to just say forget it sometimes, but Brittany won’t let her and that’s what we need.”

One ongoing fight the couple is still waging is applying for Social Security benefits, as well as the elusive MS diagnosis; once that comes through, Hotchkiss will be eligible for free services, such as transportation and counseling, from organizations like the MS Society.

Until that point, the couple said they will continue to strive to keep one another motivated.

“Surviving on one income is hard; I have to watch her struggle every day in the same way she has to watch me struggle. I took care of her in the beginning of our relationship, and now she’s doing that for me,” Hotchkiss said. “But she and JEVS at Home have both been a blessing. They keep me positive.”

“We need some positive in our lives,” Haniebnik added.

Shimberg said the couple’s journey from just a few years ago should itself be an inspiration for them, and others.

“If I had seen them 10 years ago hanging on a street corner and told them that eventually they’d become advocates for people with disabilities and for the gay communities, I know they would have said, ‘No way.’ But it’s possible. You can overcome drugs, adversity. Every hard day and hurdle that they’ve had, they’ve gotten through with one another’s love and support. They saved each other; that’s the power of love.”

For more information about JEVS at Home, visit www.jevsathome.org.