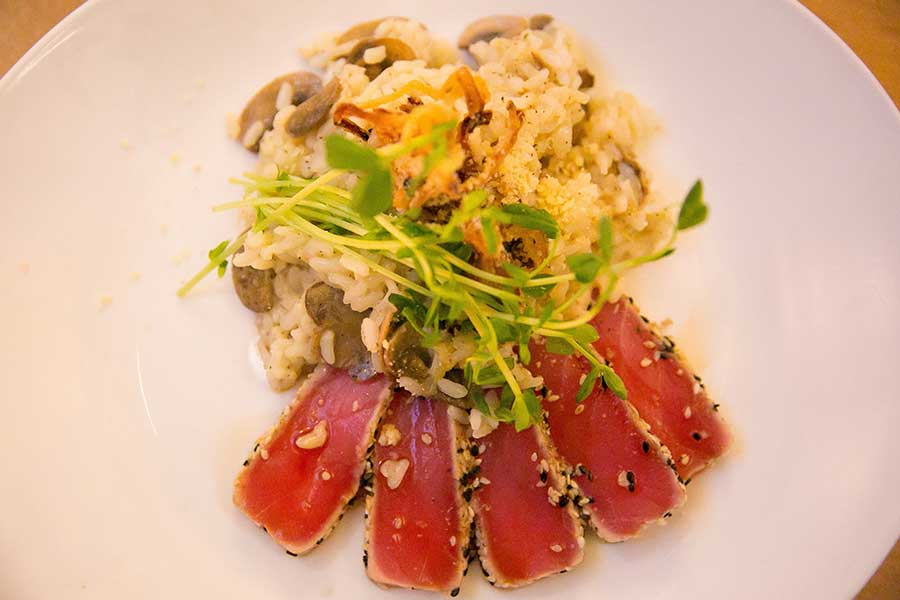 From the outside, the recently opened Bernie’s Restaurant & Bar in Glenside, looks like your standard modern, suburban upscale restaurant, with a bar section leaning towards the laidback sports crowd. But the menu tells a far more interesting story.

For example, Bernie’s “skinz” ($9) take the standard potato skins we all know and love in an Indian direction, with chicken and curry taking the place of bacon and scallions. The result is a dish with the same texture that scratches the potato-skin itch, but it’s much less fatty, messy and greasy than the usual version of the appetizer. The panko-crushed goat cheese ($10) had a hearty crust that was the perfect accompaniment for the bright and flavorful salad that came with it.

The true highlight of the menu was the sesame-crusted ahi tuna ($12). The beautifully presented sliced tuna was perfectly seared and crusted on the outside, leaving the interior raw and sushi-like. The contrast in warm and cool, and the Asian flavor profile of the fish, played well with the warm mushroom risotto on the plate.

Bernie’s entrées, if nothing else, deliver healthy, bordering on massive, portions. The salmon vera cruz ($19) had a Mediterranean flair, with a massive slab of salmon resting on top of mashed potatoes, dressed with olives, roasted garlic and white wine. The Thai BBQ chicken ($16) was a nicely roasted skin-on chicken breast on a bed of fried rice; both were solid but the magic is in the sweet chili sauce that comes on the side and that gives the dish a nice kick in the pants. The shaken crispy beef ($15) is basically the Canadian staple poutine filtered through the sensibilities of a steak house. The roast piece of tenderloin rests on a plentiful bed of house-cut fries and is drizzled with a sweet and savory ginger-orange gravy.

Desserts at Bernie’s are pleasantly decadent. The apple crumb pizza ($6) was nicely balanced with an oat crust and creamy vanilla ice cream. The bread pudding ($6) was something out of Willie Wonka’s factory: oversized and piled high with whipped cream and chocolate. You’ll need a friend or two to finish it, but it’s definitely worth diving into.