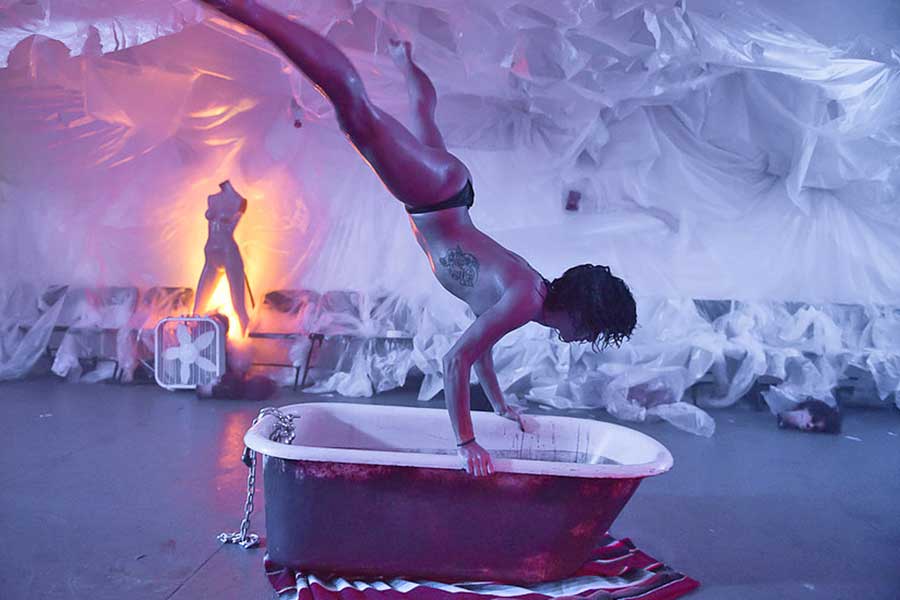 Gunnar Montana blames his mother for getting him started in show business.

“I grew up in the sticks of Montana,” the performer explained, “and she didn’t allow anything in the house that sedated the imagination. No Comcast, no cell phones, no excessive video game-playing. As a kid, I was creating fun games, playing in the sandbox with my hands and dancing around for entertainment. Flash forward 20-some years and you have the makings of an artist.”

And when Montana talks about being an “artist,” he means it in the most comprehensive way possible. Over the past several years, he has been building an increasingly impressive reputation for the dramatically inventive performance-art pieces he presents at each year’s FringeArts Festival. For these pieces, he serves as dancer, designer, choreographer and overall conceptual auteur. (He’s also known as quite the local gay sex symbol — but let’s not embarrass him in print.)

For those who have missed out on past Montana spectacles, or for fans who wish to relive those spectacles, Montana has devised his next extravaganza, “Exposed.” Hosted by the creator himself, “Exposed” is, according to Montana, “an assortment of works that highlight how my work has grown over the past five years and the direction in which it looks to be heading. ‘Exposed’ showcases my last six productions in chronological order from strippers (‘Rub’) to priests (‘Purgatory’).”

“I’ve revamped some of my favorite pieces of choreography,” he continued, “as well as some of the performances that proved to be crowd favorites over the years. I’m excited to talk and tell stories about my work. I’ve chosen performances that people have told me they were touched or inspired by.”

When one wears as many creative hats as Montana does, it’s difficult, if not impossible, to pigeonhole him with an easy-to-categorize label. He will label himself with a comprehensive overall description of “visually physical artist.”

Unsurprisingly, Montana does not draw inspiration from a single source, with each individual show drawing influence from a different cultural meme.

“Depends on what I’m creating,” he explained. “Usually, I find some type of theme I want to tackle and go from there. With my first show, ‘Rub,’ it was ‘Flashdance’ and ‘Crazy Horse.’ With ‘Resurrection Room,’ it was Sigourney Weaver in ‘Aliens,’ and ‘Purgatory’ was created after visiting multiple Sunday receptions in Catholic churches around Philadelphia.”

While sexuality often plays a big role in his work, Montana maintained that his personal sexuality does not have a big influence on his creations.

“It’s not a big [influence] at all. I’m not a ‘gay artist.’ I’m an artist who happens to be gay. There are a lot of universal themes in my work and I find that my mind is open enough to reflect on all the options that these themes have to offer. The work itself isn’t geared toward any one sexuality. It’s universally open-ended. Anything goes.”

Montana has welcomed the chance to reassess his past work from a more mature and experienced perspective.

“I’ve matured a lot,” he acknowledged. “In the beginning, it was all about making a splash. I’ll admit that five years ago I was trying to be as outlandishly sexy and shocking as possible. It’s been really fun to find those moments, to look back on them and laugh. But at some point [in my development], I woke up thinking, If I die tomorrow, what will my work have said?”

One of the treats that “Exposed” audiences will have is a sneak peak at Montana’s next Fringe show.

“I am more than excited for what’s next. I will be announcing the name of the show and sharing some of what the experience will be like.”

Montana is also excited about working with his current venue, the William Way LGBT Community Center, which “Exposed” will support with a donation of $5 of each ticket sold.

“I’ve found that life as an artist can be an extremely narcissistic way of living. You’re constantly thinking about yourself and for yourself and how to keep your brand above water. Now that I feel more settled in my career, I wanted to reach out and do something for the community that has helped me get to where I am today. I still have a long way to go, but I find it important to take a moment every once in a while, look back and say thank you.”