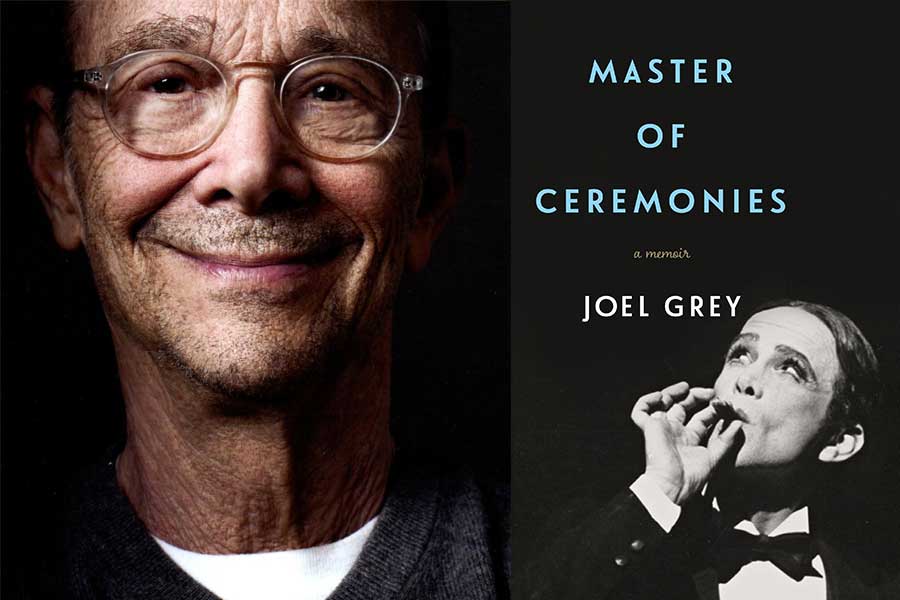 Joel Grey’s memoir, “Master of Ceremonies,” nimbly chronicles the out actor’s family life, career in show business and his acceptance of his sexual orientation. It’s a breezy read, full of heart and insight, most notably about the face Grey puts on to perform and the real, often internal, conflicts the actor has about the same-sex desires he is afraid to disclose.

The book recounts Grey’s triumphs on stage when he was a young man performing with his talented father. He charts his success in finding the character of the Emcee in “Cabaret” — a show that won him a Tony, Oscar and a Golden Globe — and “George M!,” a production he headlined, but that was met with mixed success. Much of the off-stage drama in “Master of Ceremonies” addresses Grey’s complicated relationships with his disapproving mother, and the difficulties he had with his wife, Jo.

While the actor did not officially come out until last year, he found self-acceptance playing the role of Ned Weeks in the Off-Broadway production of Larry Kramer’s “The Normal Heart.” Grey’s book reveals the power and poignancy of his life and work. Before his visit to the Free Library of Philadelphia next week, he chatted with PGN about “Master of Ceremonies.”

PGN: What prompted you to write your memoir now?

JG: For the longest time, I always thought I would do it. A couple of years ago, I read Andre Agassi’s memoir. It dealt with so much childhood pain, parental stress, dealing with the pressure of the sport and whatever else. He seemed to go through it, be changed by it and ultimately triumphed. That story is so compelling to me. The title of my book is not about that character but mastering, overcoming … learning how to do something and learning it well, and that’s how it began. One memory led to another.

PGN: You describe performing since age 9. Do you feel that your career was largely in your control?

JG: I began as a very pure but precocious 9-year-old. I think I always had my eye on the sparrow. That sparrow was the theater, and the art of it. And I think that somehow, no matter how bad things got, that prevailed until I was ready to give up and it all turned around. I tried to [portray] any number of characters who had nothing to do with the Emcee.

PGN: You changed your name, and you even got a nose job. You discuss your Jewish identity and your coming to terms with being a gay man. Can you talk about your goals and transformation?

JG: I think there was always a tantalizing brass ring in the guise of art that somehow kept me going in a creative way, no matter what was going on in my personal life. I was always reaching to do something good, reaching towards mastery. As for coming out, I was acknowledging something that did not feel like public information. It felt like it was the right thing to do. Who knows who is going to read this book and feel some courage to live their life? I have an email from someone who met me a long time ago. This man was coming to New York to meet a guy once every six months or so. His email said, “Thanks for speaking up for us married with children.” I thought that was amazing! I wonder how many people are out there who are “stuck” — or happy?

PGN: You candidly and poignantly discuss the sexual and emotional conflicts you faced. What observations do you have about your experiences with your sexuality over the arc of your life and career?

JG: I think maybe there’s something in the art aspect — I’m just sorting this out myself. Playing Ned Weeks in “The Normal Heart” was a way into self-expression. When the doctor [I consulted about the project] told me, “If you have to kiss [the actor in the “Normal Heart”], then I wouldn’t do it.” That wasn’t my take or my passion. I had to do it. I had to do something dangerous and something that mattered. I’ve always sought out difficult or strange roles, complicated people. I think there’s something — and I don’t know how deep it is — that in all my parts, I’ve never gotten the girl.

PGN: The only real “dirt” you dish is about your conflict with Bob Fosse on set of “Cabaret.” Can you talk about your struggles as a performer?

JG: That’s what actors do all the time! [Laughs]. Your last success all of a sudden means nothing. They want to audition you and see what you can do. They saw you do the impossible. So they think, Wait, let us see if you can do it again.