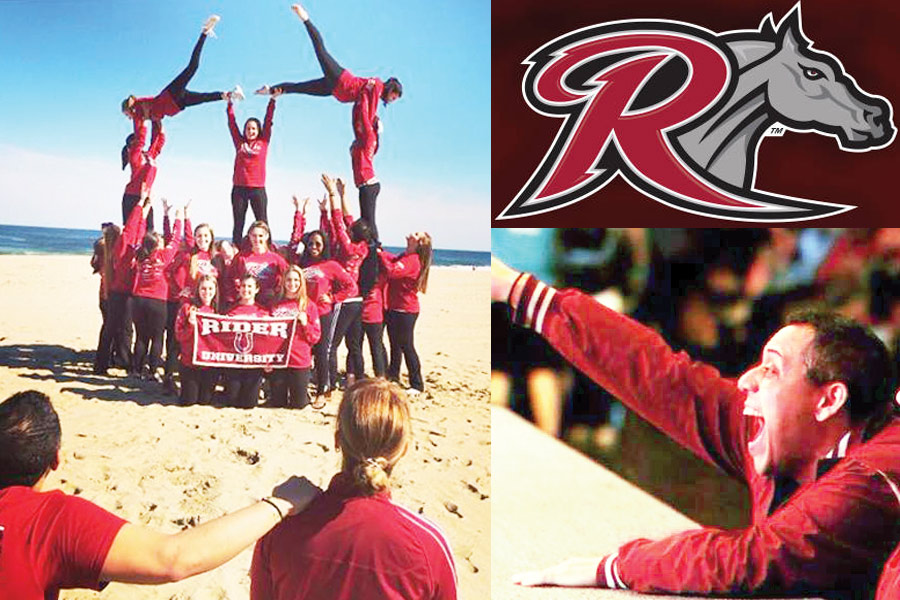 Victor Miranda was more interested in tennis when he started as a freshman at Rider University in Lawrenceville, N.J., but a friend was trying out for the cheerleading team and he decided to go with her in support. All it took was the coach asking him to help with some of the acts they were doing and he was hooked.

He realized fast that he had a talent for the sport.

“It rekindled my love of gymnastics, specifically tumbling,” Miranda said. “And I loved trying to do things that wowed people. Since then, I have never looked back and cheerleading has become a big part of my life.”

A couple of years after graduating, Miranda decided to continue into the all-star arena and started coaching. He is now a volunteer assistant coach at Rider. He said he thought it would be fun to volunteer time and experience and “give back to the university where it began.”

He teaches all of the skills needed for a competition — stunts, pyramids, jumps, basket tosses, tumbling — and they have won several. Miranda has coached the team to national championships four times at ACDC “Reach the Beach” — and three out of the four times they have received the highest score out of all the college divisions, and won grand champions as well.

The team knows Miranda is gay and is accepting, but it’s not a topic of conversation, because “I am not their friend,” he said. “I am their coach — until they graduate or leave the program. Then I can become your friend.”

In the meantime, Miranda continues his work ethic of being tough with the guidelines of being the best you can be, work as hard as you can and leave everything on the floor.

Now the organization is gearing up to take it to the next level by going to the NCA College Nationals in Daytona. That competition is strictly college teams, with the best teams in the country travelling to compete.

“We are extremely excited about going,” said Miranda. “It will mean a lot to the program, the university and to our athletes; however, it is a very expensive endeavor and unfortunately the funding the school gives the program will in no way come close to covering the expenses. So we need to fundraise so we can go down to Daytona and compete.”

The student athletes practice three nights a week, have school, jobs, perform at all of the men’s and women’s games and have many other activities already keeping them busy — which makes for little free time for fundraising. Add to that the available gym times for them aren’t the best, as other teams get first choice.

Miranda said they hope to change that with this competition.

“We hope that with a good showing in Daytona and some active support of the program, maybe my student athletes can get priority scheduling, scholarships, funding for competitions and new uniforms,” he said.

Anyone interested in helping the team raise money to compete can donate to Rider University, c/o Cheerleading Alumni Gym, 2083 Lawrenceville Road, Lawrenceville, N.J. 08648. You can see photos and videos of their performances at facebook.com/RUCheerleading/?fref=ts.

This year, Cupid’s Undie Run is Feb. 20 in and around XFINITY Live! in South Philadelphia. Here’s hoping the temperatures are significantly higher than last weekend, or there may be some frozen assets.

If you’re not signed up — my.cupids.org/registration — you have to do it fast. Raise enough cold cash and you could earn some authentic Cupid’s Undie undies, socks or other merchandise. Never for sale — you have to earn them!

If you’re not into frozen buns and rolls, you can also volunteer because they need all kinds of support to pull the event off, not just the players and the payers. There are perks that include alcohol, so consider wisely.

The party gathers at noon, with best costume and other awards at 1 p.m. and the run at 2 p.m. You can’t get in unless you’re registered as a runner or a volunteer, but you can zip down that way and enjoy the view. Bring a couple of dollars to donate to be a good sport.

The Undie Run is held in 40 cities across the country and raises money to fight neurofibromatosis.

If you want to share a story idea, an interview possibility, fundraiser event or tournament invite, contact [email protected].