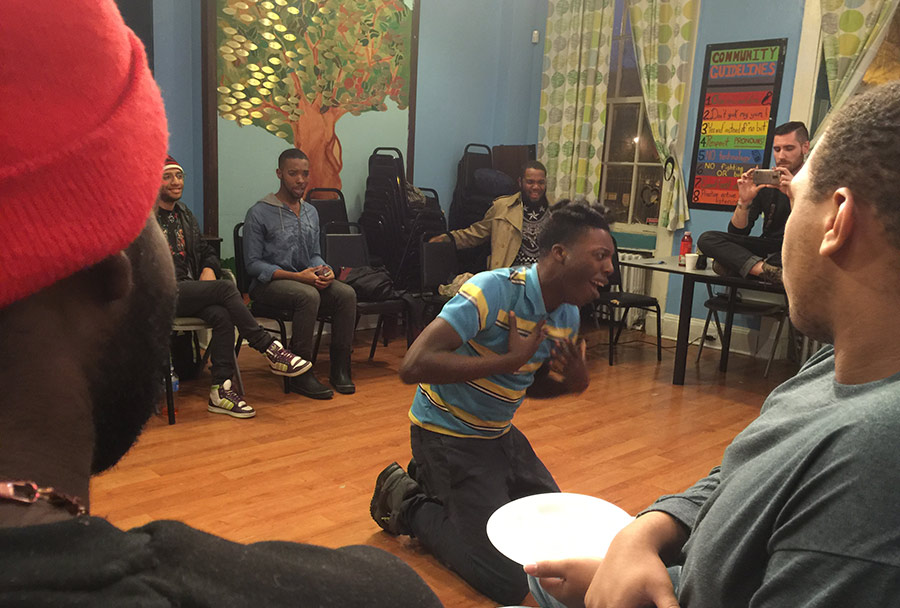 The Attic youth made a runway in less than a minute Tuesday night. Program specialist Loran Grishow-Schade sat cross-legged at one end with a smart phone, waiting to record a half-dozen queens who hadn’t yet received final critiques on their drag performances.

When “Collard Greens and Cornbread” by “American Idol” winner Fantasia started streaming, the youth who’s performing as Treyannah West crossed her arms over her chest, then sashayed down the runway with a foam plate in hand. She deposited the plate pointedly in the laps of several audience members and crawled through some choreography on the floor. Snaps filled the room at the end.

West is one of 19 young people who will perform in the sixth-annual drag show fundraiser called “Sweethearts and Red Hots” in honor of Valentine’s Day. It takes place 6 p.m. Feb. 19 in the ballroom of the William Way LGBT Community Center, 1315 Spruce St. The theme is “Seven Deadly Sins.”

Tickets cost $10 in advance, $15 at the door, $20 for VIP front-row seats or $5 for those under 23. The money supports youth-leadership initiatives at The Attic Youth Center, said Alyssa Mutryn, director of development.

“It’s our biggest show yet,” said Grishow-Schade, who said when they started three years ago there were 14 performers. “This has now become a two-act, 95-minute opus to young queer drag.”

“There are a few cornerstones we have that just keep growing and growing,” they said. “Drag, for me, it’s surprising that it’s still growing. I would’ve thought it would’ve hit its peak by now, that people are over ‘RuPaul’s Drag Race’ and things.”

Part of the reason the form stays fresh at The Attic comes from Grishow-Schade’s approach. The idea is that drag doesn’t just have to be one gender dressing up as another. In the nine months they spend preparing for the show, they all talk about the ways in which drag can be problematic, dealing with issues of sexism, misogyny and misogynoir.

As Dalyla Mizani, youth director of the show, pointed out: “We’re all talent of color.”

Grishow-Schade noted that this year boasts a lot of younger queens who are finding their footing in drag.

“It’s unique in terms of what professional drag or the drag in the bar scene offers,” Mutryn said. “A lot of our youth can’t go to that anyway because they aren’t 21. It gives people an opportunity to view drag in a different way.”

“It’s cool because you see youth who are shy or not that outspoken,” she continued, “and then they do drag and you can tell they change. So it’s about drag, but it’s also about life and confidence.”

At Tuesday’s rehearsal, the youth offered each other practical tips, like: removing a jacket should be done just off stage so the performer won’t slip on it; and performers shouldn’t spend too much time low to the floor because people in the back won’t be able to see.

After rehearsal, Mizani announced the roles in the finale, which will be a surprise to the audience. But she did reveal the full complement of queens will participate.

“I’m excited for people to see what they all bring,” she said. “Even though we have a theme, there’s a lot of different drag within this group.”