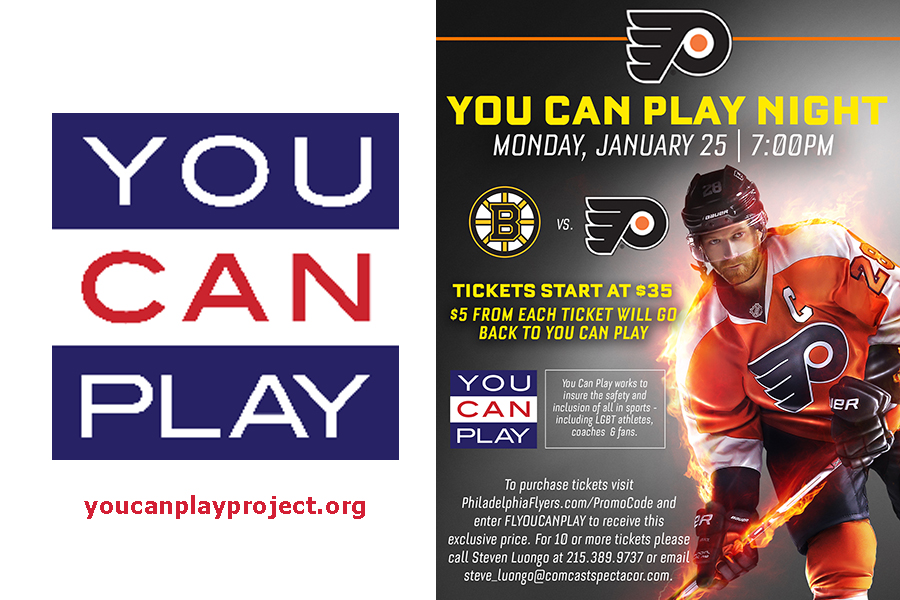 On Jan. 25, the Philadelphia Flyers will celebrate the NHL collaboration with national LGBTQ youth sports organization You Can Play during a regular-season game against the Boston Bruins. Event organizers hope to bring more awareness to the program and help put some money into the You Can Play coffers.

The You Can Play Project was cofounded by Philadelphia Flyers scout Patrick Burke, former Colorado Avalanche executive Brian Kitts and Glenn Witman, who played college hockey and also founded GForce Sports. The partnership between NHL and You Can Play was announced in April 2013 and with it, the NHL became the first major American professional sports league to officially partner with an LGBT advocacy group on this scale.

At the time, NHL commissioner Gary Bettman said, “Our motto is ‘Hockey is For Everyone,’ and our partnership with You Can Play certifies that position in a clear and unequivocal way. While we believe that our actions in the past have shown our support for the LGBT community, we are delighted to reaffirm through this joint venture with the NHL Players’ Association that the official policy of the NHL is one of inclusion on the ice, in our locker rooms and in the stands.”

The Flyers organization was originally contacted weeks ago by organizers at You Can Play about holding an awareness event at the arena. Sarah Fergus, manager of marketing communications for the Philadelphia Flyers, said the league is frequently approached by groups wishing to be part of a game. This will be the Flyers’ first team-up with You Can Play, although other NHL and college hockey teams have hosted similar events, as well as other local sports groups, like the Philadelphia Soul.

“We’re very excited to be hosting the first You Can Play Night here in Philadelphia as a part of the NHL’s league-wide initiative,” said Fergus. “We immediately jumped at the opportunity to work with them.”

As part of the LGBTQ-focused evening, there will be a special recognition of Mayor Kenney’s director of LGBT affairs, Nellie Fitzpatrick.

“It is a powerful message of inclusion to have an entire sports organization, like our Flyers, stand up and declare that they are an organization that supports LGBT players, fans and staff,” Fitzpatrick said. “I am incredibly grateful for the work of You Can Play and the Flyers, as well as my friends [You Can Play vice president of program development and community relations] Anna Aagenes and [GO! Athletes director of strategic initiatives] Nora Cothren for dedicating their work to ensuring that LGBT youth grow up knowing that no matter their sexual orientation or gender identity, they can play, cheer, participate and grow. I look forward to collaborating on further projects with You Can Play here in the city of Philadelphia.”

Fitzpatrick added she is looking forward to networking with community members and allies at a pre-game gathering at 5:15 p.m. at the Cure Insurance Club inside the Wells Fargo Center. You Can Play and Flyers representatives will participate in the event.

Aagenes noted that one of the primary goals for the Flyers-You Can Play partnership is to use this inaugural game as a springboard for future events.

“We would like to make the event a yearly tradition,” she said. “The goal is to keep the involvement in the community after the game and throughout the year.”

Tickets for the Jan. 25 game against the Boston Bruins that are purchased with the promo code FLYOUCANPLAY will have $5 of the ticket charges donated to You Can Play. Money raised helps support the organization’s video-outreach program, which includes hundreds of videos available online. Ally groups who are supportive and encouraging to young LGBT athletes make many of the videos, but some feature out athletes as well.

Go to PhiladelphiaFlyers.com/promocode for the special deal. For groups of 10 or more, contact [email protected].

You Can Play will celebrate its four-year anniversary on March 4. Donations can be made directly to the organization at youcanplayproject.org.

• Philadelphia Falcons (falcons-soccer.org) play pickup games 8-9:45 p.m. Mondays and Tuesdays at Guerin Rec Center, 2201 S. 16th St., through the end of January and 1-4 p.m. Saturdays in February and March. Your first time is free, so get out and play!

• Philadelphia Fins Aquatics Club is paddling towards the annual Postal Swim Jan. 31 at Friends Select School on the Benjamin Franklin Parkway. Looking is free, but you can also donate in the name of your favorite Finner. It helps them raise money for the organization and a local nonprofit. On Facebook, search FINS.

If you want to share a story idea, an interview possibility, fundraiser event or tournament invite, contact [email protected].