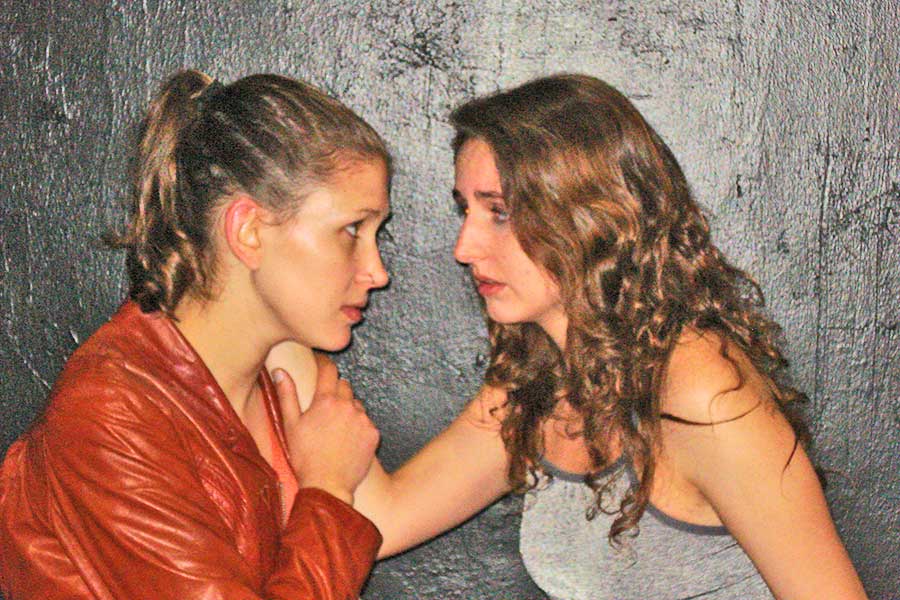 “Would You Still Love Me, IF?” a new play by author John S. Anastasi, explores the effect that gender-reassignment surgery has on the lives of four intimately connected people.

The Underbite Theatre Company is putting on the play, which runs for eight performances beginning Nov. 5. It is being staged in Studio 5 of the Walnut Street Theater, 825 Walnut St.

Personal identity, love and the unexpected consequences of significant change are major themes running throughout “Would You Still Love Me, IF?”

When the play opens, we meet Danya and Addison, a committed lesbian couple in their late 20s. Danya, played by Stanton, and Addison, played by Parry, are deeply in love. They are also about to adopt a child.

Unbeknownst to Addison, however, Danya has been struggling with her identity since childhood. For years, Danya felt she should have been born a man. Now that she’s found true love, Danya is ready to begin her transition. But first she must tell Addison.

Unfortunately, Danya’s decision to embrace her authentic self is precisely what undermines Addison’s identity as a lesbian. The stress and strain this decision generates reverberate beyond the couple, affecting Danya’s mother Victoria, played by Judy Knoop, and her surgeon Dr. Gerard, played by Heather Plank.

According to Bookler, Danya’s willingness to risk the most important relationship in her life is what gives the play its edge.

“Most people in relationships, when they have to sacrifice, it’s work or friends or family or something else, but here it’s identity,” Bookler said. “We’re talking about somebody who is truly going to change themselves and have this gender-reassignment surgery at the risk of losing the relationship.”

Of course, few in the audience will have confronted this particular challenge but the experience of love, loss and sacrifice are common to everyone gay, straight or transgender. While rehearsing, Bookler, who is straight and married, has been mindful of this. To represent these characters with honesty and empathy, she found a connection to them via the experience many women have of not being comfortable with their bodies.

“Especially for women, a lot of us, we do have body issues and, again, it’s a different form of it, but at least there’s a connection there,” Bookler said. “So that’s what I’ve tried to do, to put myself in as much of a situation to empathize with the characters.”

Bookler learned about the play after putting out an open call for playwrights to submit work for Underbite’s current season. She was looking for thoughtful, provocative work, and Anastasi’s script, which she read “blind,” immediately jumped out.

For Bookler, the script has a number of attractions. To begin with, it puts a transgender character in a central role. It is also informative. Danya’s exchanges with Dr. Gerard present medical information about gender reassignment that audiences are likely unaware of. Anastasi is a doctor himself, and he consulted colleagues working with transgender patients while writing the script.

What Bookler finds most appealing, though, is the way the play refuses to meet standard expectations. Sure, it’s a love story, but it is not romance or a fairy tale.

“It kind of leaves the audience hanging, which is what I really love about plays like this, when they don’t wrap it up in a nice little bow for you, where the audience leaves with questions, wondering are they better off, are they not better off, what is going to happen next,” she said.

Those are precisely the kind of plays Bookler wants Underbite Theater Company to present. Its first production, “Bird in the Window,” explored a woman’s lingering trauma after being sexually assaulted. Its second, “Snyder v. Phelps, the Musical,” examined the Supreme Court’s controversial 8-1 decision in favor the Westboro Baptist Church, which is notorious for picketing funerals with signs reading “God Hates Fags.”

Those kinds of plays get audiences talking, and Bookler believes Anastasi’s play will do the same. She welcomes feedback and plans to share it with the author. As she explained, “Would You Still Love Me, IF?” is a work in progress. This is only the play’s second staging, and Anastasi continues to tweak it.

It’s too soon to tell if this play will become a kind of “Torch Song Trilogy” for a new generation, but Bookler is optimistic.

“I am hoping that this is going to be one of the ones that is going to propel other playwrights to put their voices out there and, again, make this something that is more the norm that we see on stages all over the place,” she said.